Just west of Castro Station, the dark, narrow passageways linking the Muni Metro subway and Twin Peaks Tunnel open up into a wide, low-ceilinged space filled with rows of columns. If you’re a KLM rider, you pass by it every day. Formerly known as Eureka Valley Station, an abandoned dusty time-capsule from Muni's past. Even though trains still run by its platforms, no passengers have boarded or alighted here in more than four decades. A casual observer breezing past might never know that it's there, as very little remains of this subterranean streetcar stop that's as old as the tunnel itself. 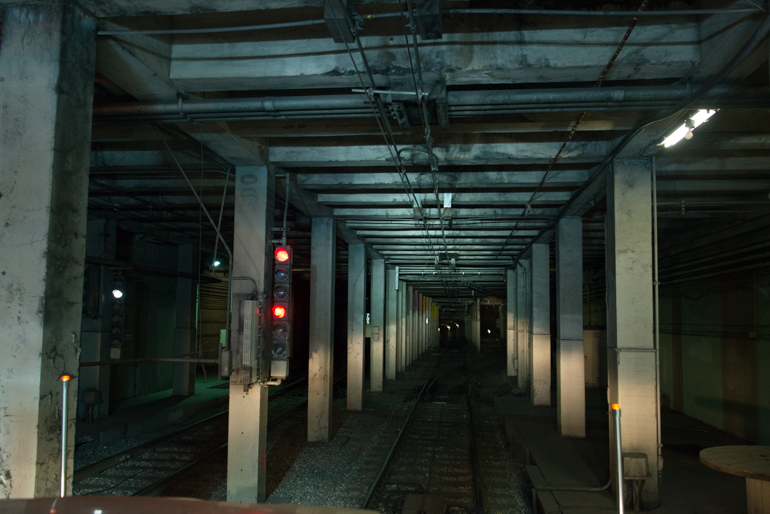 Eureka Station was first proposed in a 1913 transportation plan by Bion Arnold as the transfer point between the Twin Peaks and Sunset Tunnels, which according to this plan were to join together near Market and Eureka Streets. With the completion of the Twin Peaks Tunnel in 1917, the station opened to the public to serve the Eureka Valley and western Castro neighborhoods. By the mid 1920s, the Sunset Tunnel was becoming a reality but the plan to have it branch off of the Twin Peaks at Eureka never came to fruition and the station remained as a small neighborhood stop. By the early 1970s, Muni began construction on the Market Street Subway and the death bells tolled for the soon to be defunct Eureka Station, which was located at the planned juncture of the old and new tunnels. Eureka Valley is the Bay Area’s only known ‘ghost station’.

Today, only Muni maintenance workers spend any considerable amount of time in the hollows of the former station. SFMTA crews inspect and repair subway infrastructure once trains stop running and before the morning rush resumes.

Next time you find yourself gazing out of the window between Forest Hill and Castro stations, look a little closer—you may catch a glimpse of Muni Metro’s paranormal past.

You can ask the experts about our history as we celebrate the Twin Peaks Tunnel’s centennial this weekend. We’re celebrating with a photo exhibit and walking tour on February 3rd at the West Portal Library Open House from 1 to 5pm.