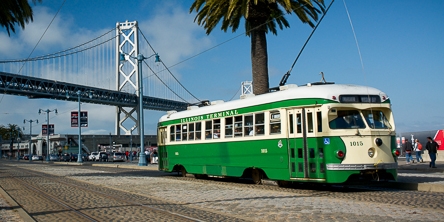 Currently we operate 27 PCCs on the F Line, including three double-ended “Torpedoes” originally purchased by Muni in 1948, 13 cars purchased from Philadelphia in 1994 and 11 cars purchased from Newark, New Jersey. The cars are painted in tribute liveries representing most of the cities that once operated PCCs, including San Diego, Boston, Philadelphia and many others.  More information on the historic fleet is available at the Market Street Railway website.

All of the PCCs have been refurbished and modified to provide two wheelchair stationing areas with stop request buttons.

Streetcars from Milan, Italy are also part of Muni’s historic fleet. The cars are called “Peter Witt” cars because their design is based on one that Cleveland Transit Commissioner Peter Witt created for faster passenger boardings. Nine of these cars are currently in service.  More information on the historic fleet is available at the Market Street Railway website.

Milan cars do not have stop request buttons or stationing areas, but there is plenty of space at the rear of the vehicle to position a wheelchair.

The fleet also includes 10 antique streetcars from around the world that run primarily on The Embarcadero between Fisherman’s Wharf and the Ferry Building. More information on the historic fleet is available at the Market Street Railway website.

Antique street cars do not have stop request buttons or stationing areas, but there is plenty of space at the rear of the vehicle to position a wheelchair. 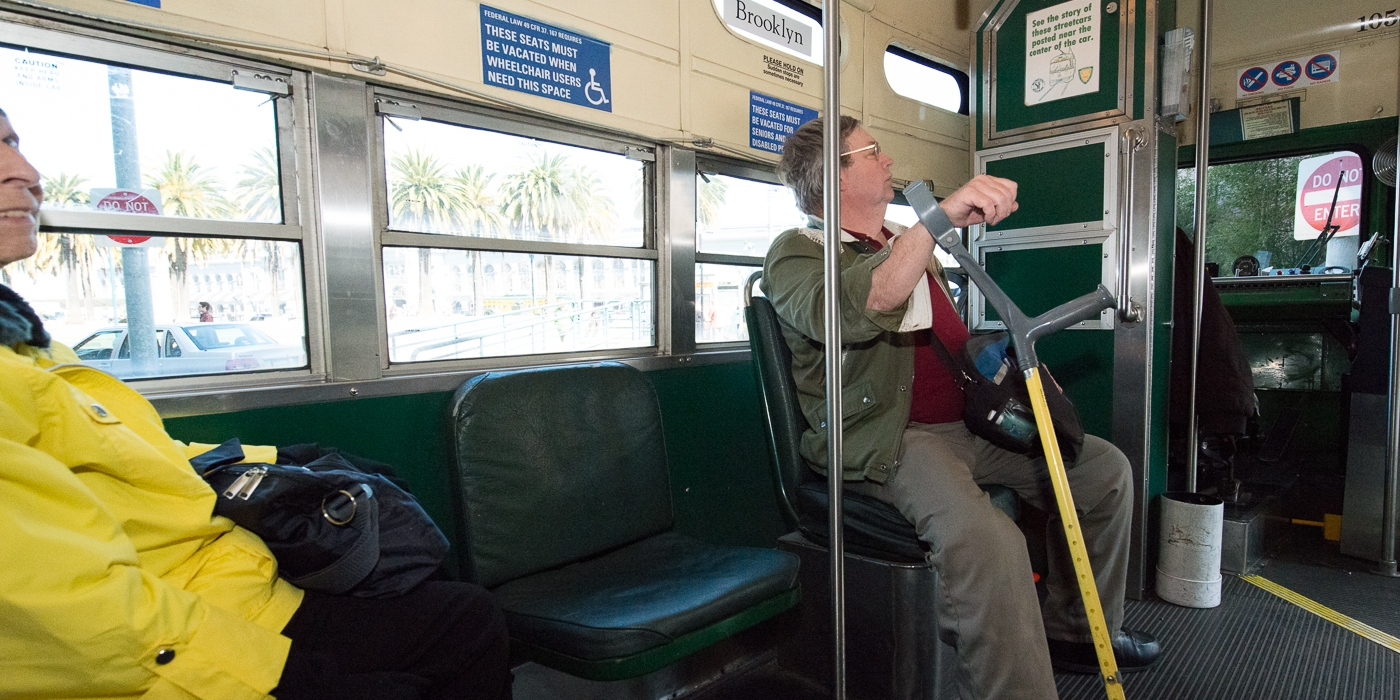 On crowded streetcars, the priority seats may already be occupied by seniors and people with disabilities or by other customers. Upon request, operators can ask passengers to give up their seats, but cannot force them to do so.

Four accessible F Line stops have mechanical lifts to raise the passenger to the level of the car floor. The lifts are located at inbound stops at Market and Church streets, Market and 5th streets and Market and 1st streets, and at the outbound stop adjacent to Hallidie Plaza.

Boarding and Exiting at Wayside Platforms

Customers should use the ramp to the wayside platform to wait for a streetcar. When the streetcar arrives, the Operator will deploy a portable bridge plate between the car and the platform to allow you to cross into the car. Immediately upon boarding, let the Operator know your destination stop and whether you need help with the securements. Proceed to one of the securement areas.

Boarding and Exiting at Wayside Lifts

Wayside lifts are separated from the boarding island by a gate which remains in the lowered position when not in use. To use a lift, go through the gate and wait for a streetcar on the lift platform.  Locate the control button. When the street car arrives, push and hold the up button to raise the lift. You must press the button continuously or the lift will stop moving. Customers who are unable to press and hold the button may ask the streetcar Operator to raise and lower the lift from inside the car.

When exiting the streetcar at a wayside lift, the Operator will raise the lift from inside the vehicle, open the vehicle door and the lift gate then deploy the bridge. Once on the lift platform, press the down button continuously until the platform has lowered completely. Be sure the lift is completely lowered before opening the gate.  Please let the streetcar Operator know if you cannot press the button to lower the lift.  Lifts can accommodate up to 600 pounds.