The project team has updates to share on the Central Embarcadero Safety Project, including key takeaways from the public engagement survey, modifications to the proposal based on feedback, and upcoming dates for the public hearing and approval.

Near-term safety changes envisioned between Mission Street and Broadway (previously called the Embarcadero Enhancement Project, Phase 1A) are now referred to as the quick-build phase of the Central Embarcadero Safety Project. The Central Embarcadero Safety Project also envisions a follow-up capital phase to consider updates to the quick-build segment and the extension of the two-way waterside bikeway from Folsom Street south to Bryant Street.

The SFMTA and Port of San Francisco will advance work along the Northern (north of Broadway) and Southern (south of Bryant Street) Embarcadero as part of the Embarcadero Enhancement Program. This re-branding is in recognition of the multiple projects and extended timeframe needed to address safety issues along the corridor – particularly in light of the pandemic-related economic downturn and the need to coordinate with planned land-use changes along the waterfront. 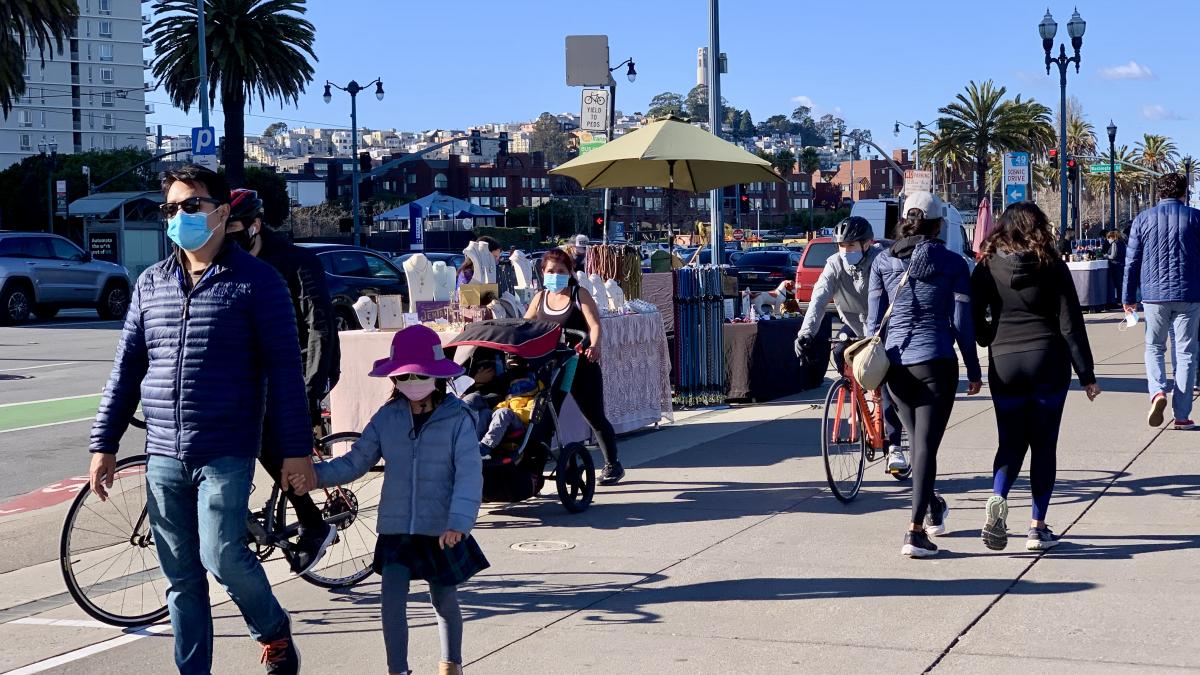 We heard from you

Over 1,400 people responded to the public perception survey in March and April, almost half saying they live nearby. Respondents expressed the diversity of how they use the Embarcadero, ranking traffic safety, the shared-used promenade, recreation and open space, and shopping, dining, and events as their most important priorities. The project team learned much from the community, and we outline key takeaways below. A complete summary is available on the project website.

While opinions differ on the specifics, we heard overall support for the project and the importance of managing conflicts between users on the crowded Embarcadero corridor – critically, that the status quo isn't working. The project team greatly appreciates the time folks took to respond to the survey and will continue to utilize this feedback in the project's design and evaluation plan.

Changes to the proposal

We have made a few changes to the project proposal based on public feedback:

We thank everyone who has engaged with the project team and helped refine the proposals. We are now advancing the Central Embarcadero Quick-Build to review by the Port Commission and SFMTA Board of Directors.

The official public hearing date is the first Port Commission meeting on May 25. Staff will then update the SFMTA Board a week later, with the Port Commission approval hearing scheduled for June 8.

If approved, implementation could begin as early as late summer. We are seeking to coordinate with an in-progress SFPUC project to limit impacts to traffic, restriping the roadway after they finish and repave the street.

We had a lot to share – thank you for reading. Additional project information is available at SFMTA.com/Embarcadero, and please pass any feedback to Embarcadero@sfmta.com.

Sep
1-30
Virtual Open House: Geary Boulevard Improvement Project What are your priorities for the future of Geary? Visit our online open house to learn about...
Sep
22
2022 Muni Service Network Virtual Open House 2 of 3 As the city recovers from the COVID-19 pandemic, the SFMTA is developing a proposal for how Muni...
Sep
23
ISCOTT Meeting 1509, September 23, 2021 Due to the pandemic and to protect our staff and members of the public, the SFMTA Meeting Room (...