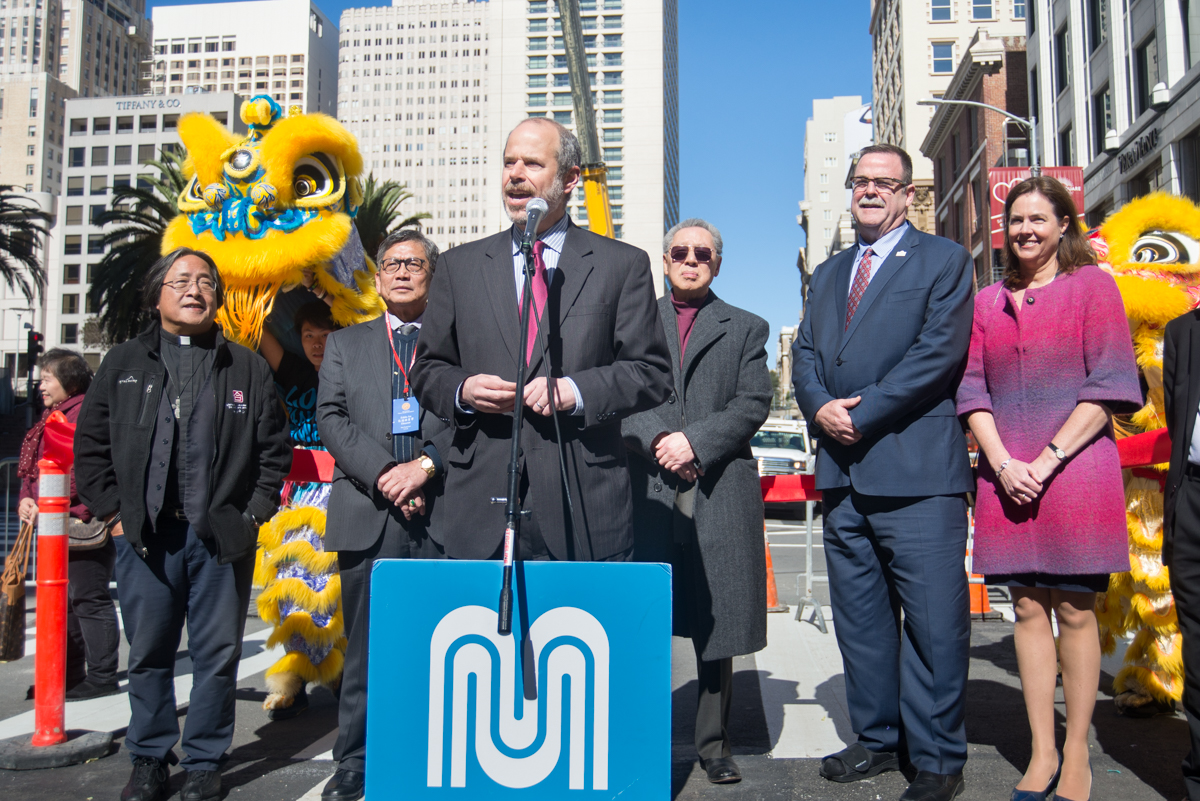 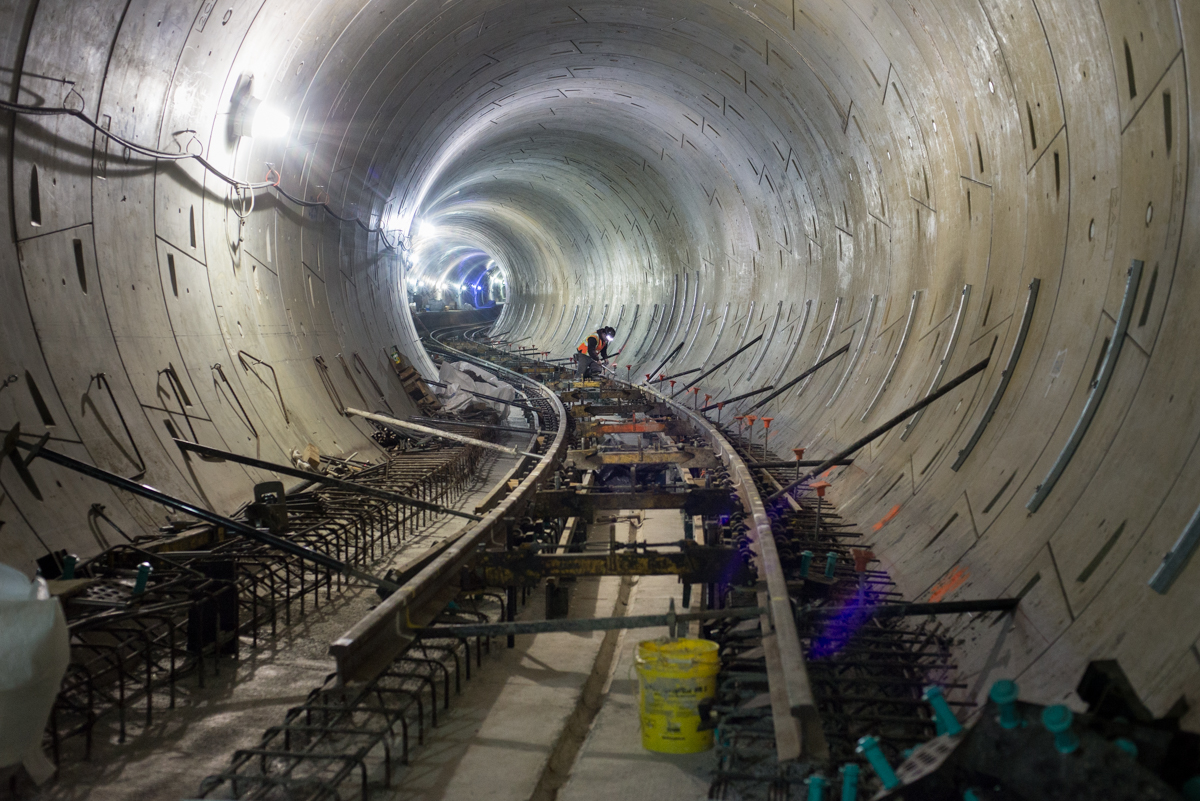 Rebar for track foundations continues to be installed in the southbound tunnel just south of the Union Square/Market Street Station platform, inside the S-curve under the Market Street subway. Surface Station, Trackwork and Systems Work along 4th Street between Bryant Street and King Street includes construction of a surface station between Bryant Street and Brannan Street. The construction team is upgrading utilities and trackwork on 4th Street between the tunnel portal at Bryant Street and the connection with the existing light rail system at King Street. 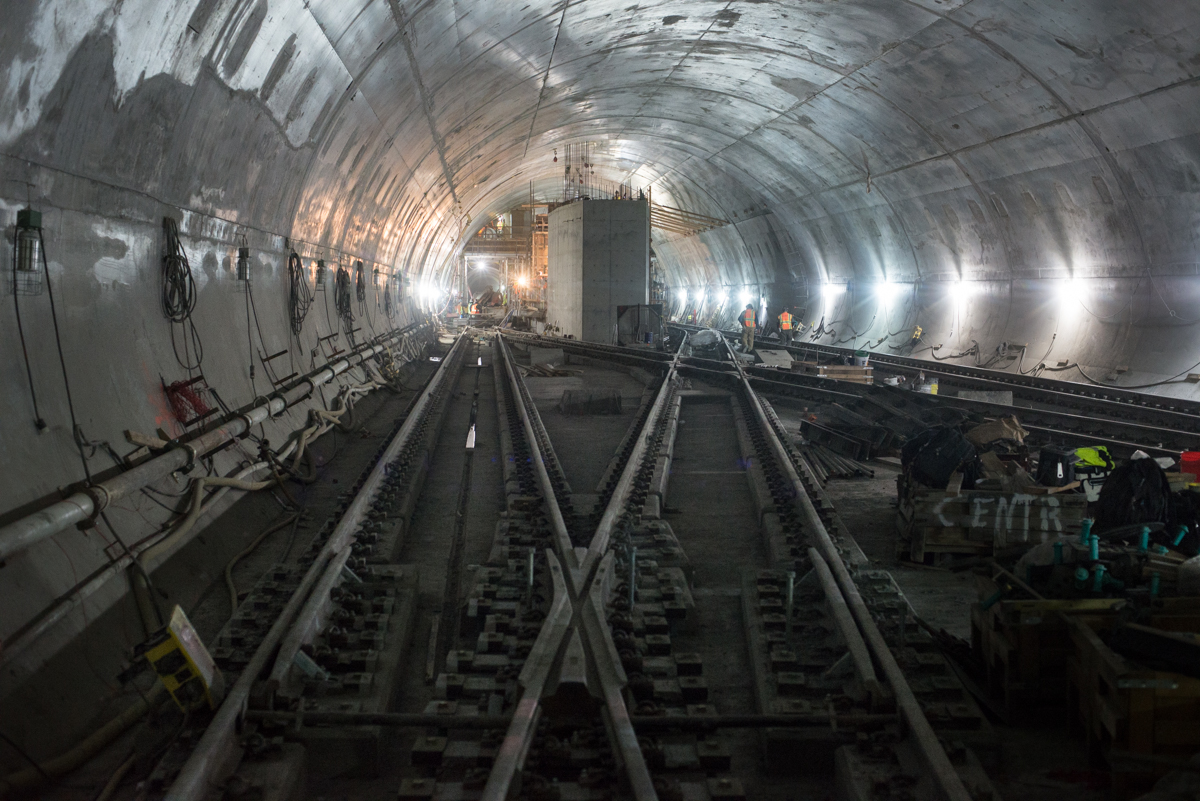 Tracks diverge along the southbound side of the Chinatown Station track crossover cavern, just south of the station platform. 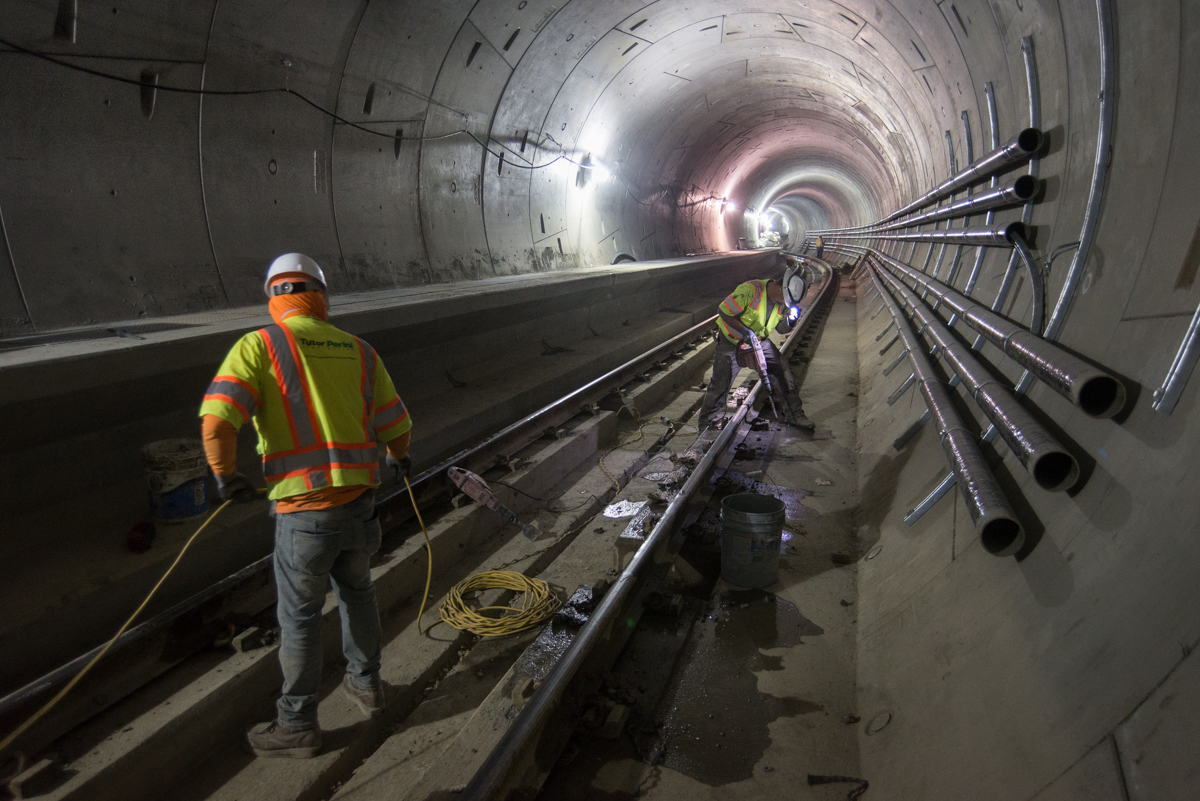 Workers clean this section of the northbound tunnel just south of the Market Street S-curve, following the installation of utility conduits. Overview 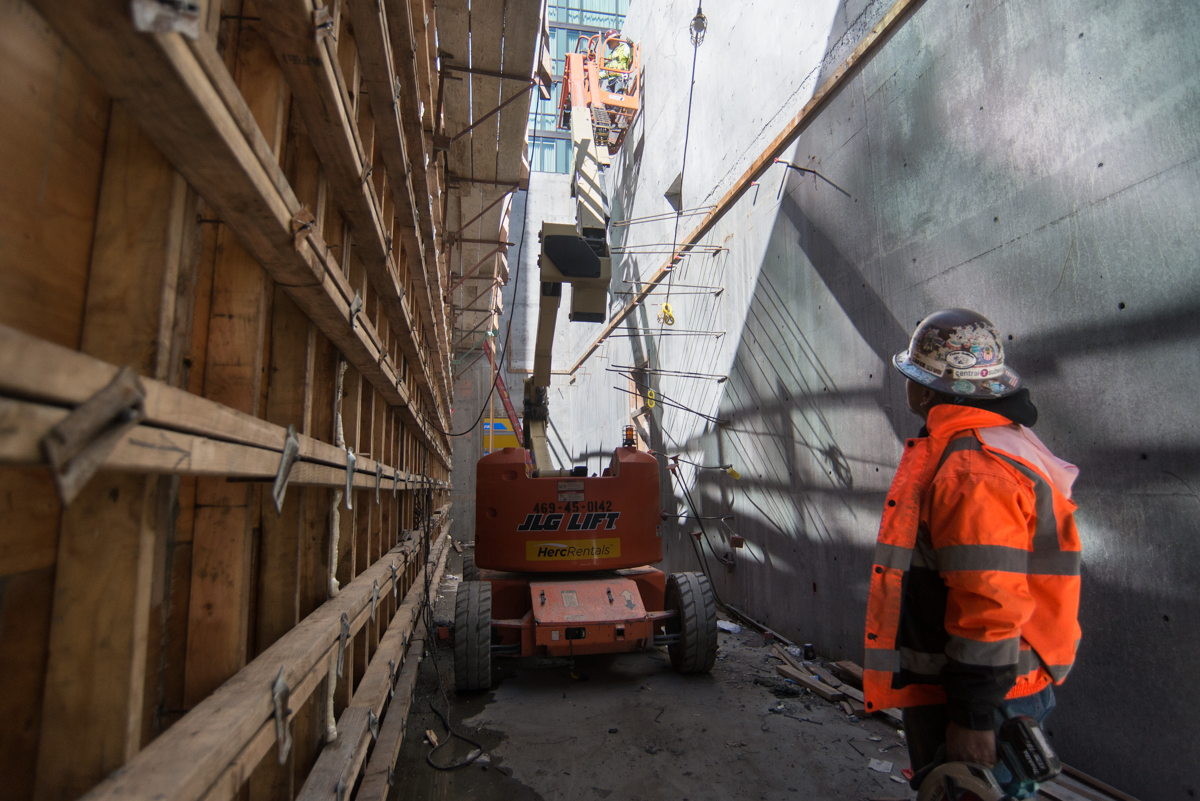 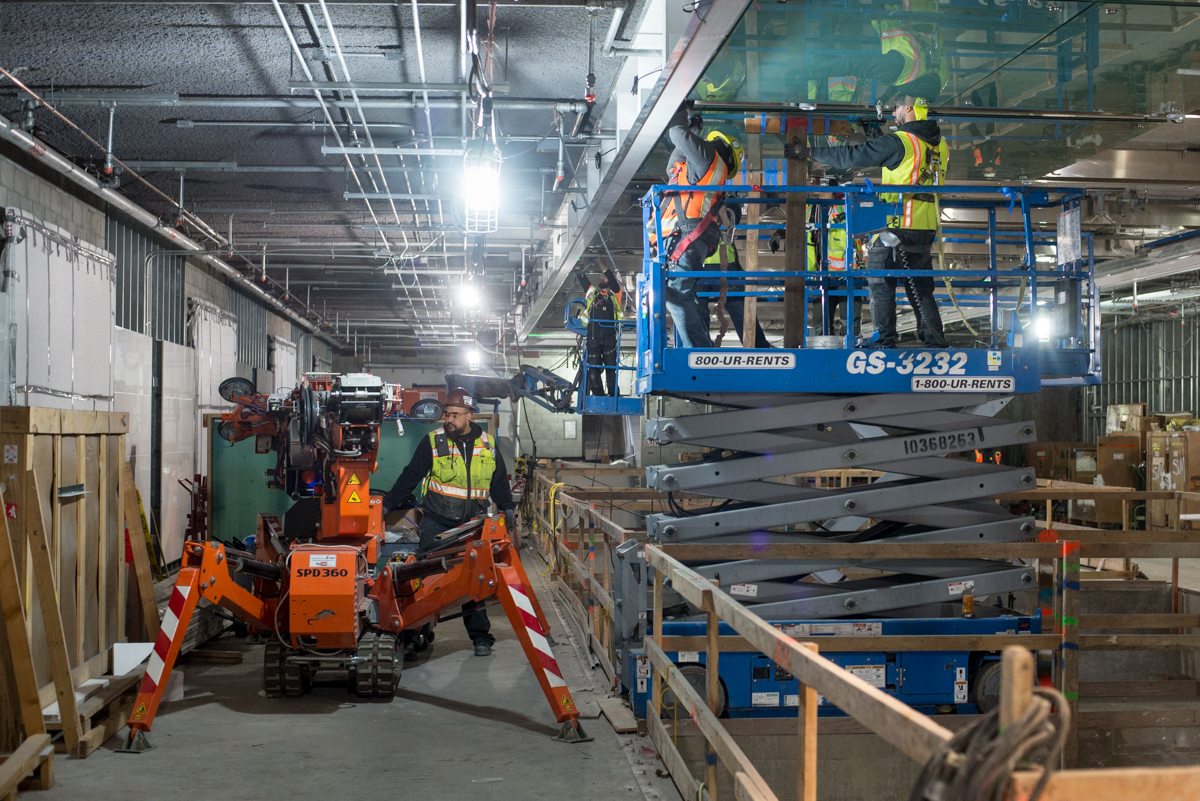 A vast array of interior elements including glass paneling and utility conduits are being installed on the concourse level. 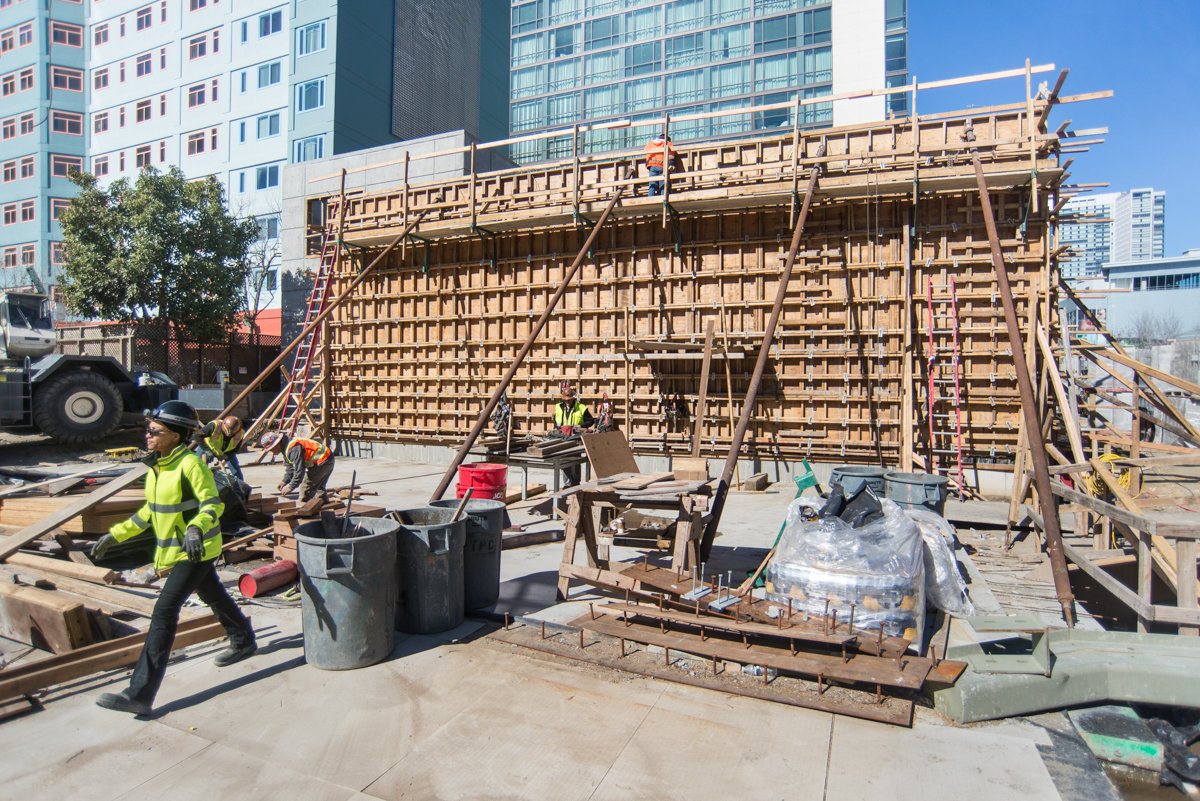 A massive concrete form stands as part of work to construct the wall at the south end of the main station entrance structure. Overview 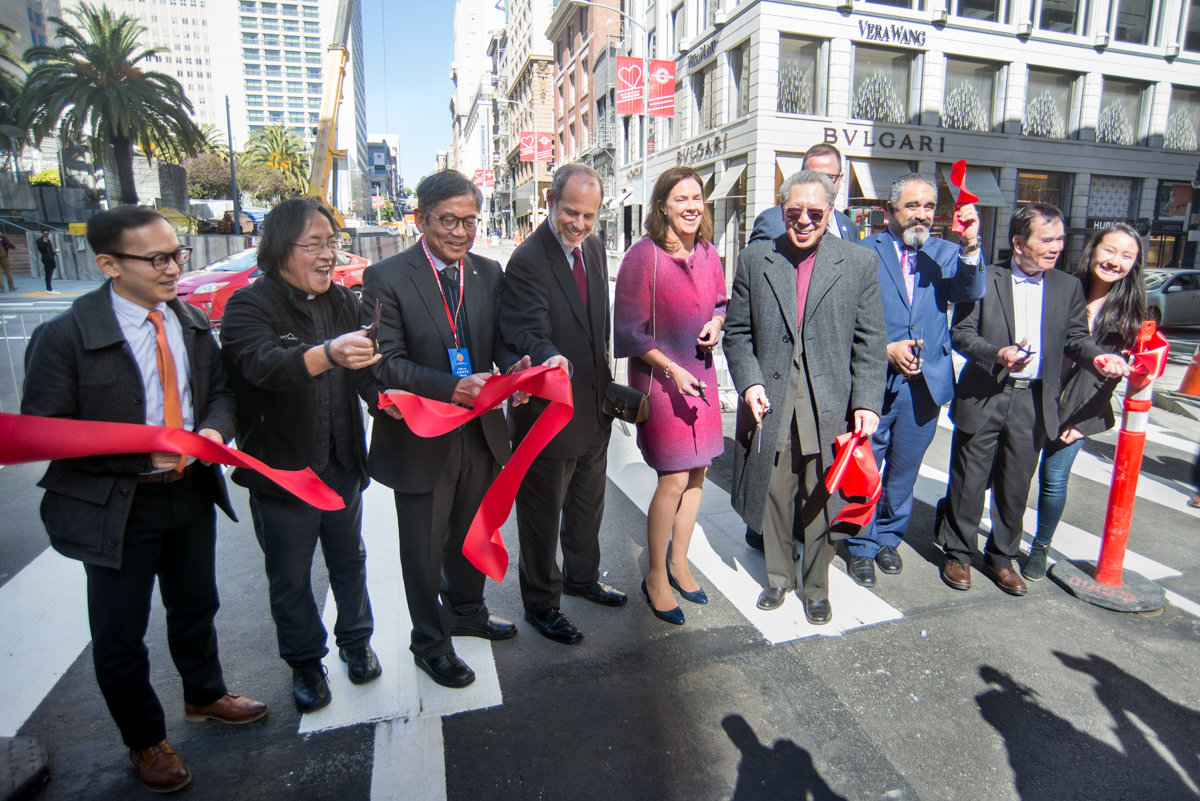 SFMTA Director Ed Reiskin and a host of community and business representatives cut the ribbon to reopen Stockton to vehicular traffic between Geary and Ellis. Union Square | Market Street Station

Stockton Street has been reopened to both traffic and transit between Geary and Ellis. This allows the 8, 8AX, 8BX, and 91 OWL bus routes to return to their previous alignments, with the 30 and 45 returning later this year.  One lane on the south side of Ellis Street is open at all times for eastbound traffic.  Parking garage access is open on north side of Ellis Street.

The installation of waterproofing, structural elements, and concrete at the southeast corner of the Union Square Garage continues.  There will be a continued presence of vehicles and equipment as work at this location continues.  Installation of internal structural elements and utilities is ongoing under Stockton Street as well as the northeast corner of Stockton and O'Farrell. 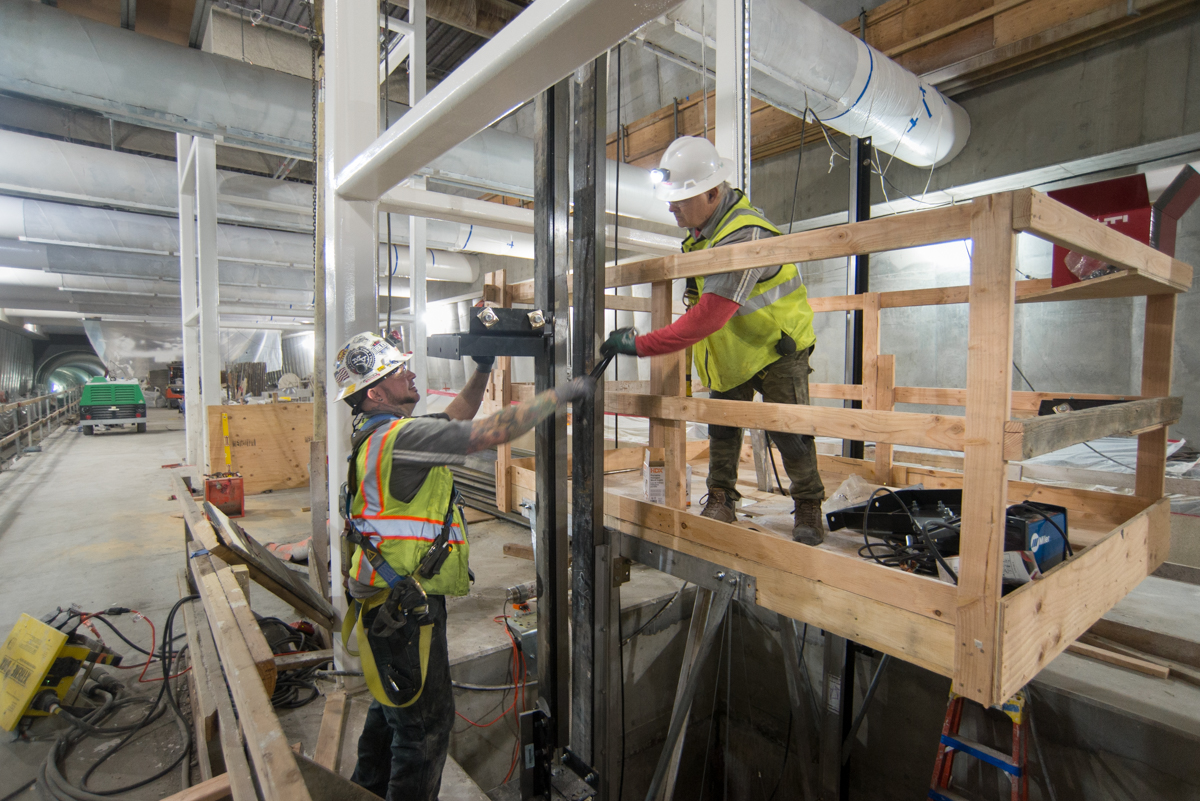 Two men on the platform level pass tools to each other while installing portions of a future elevator mechanism. 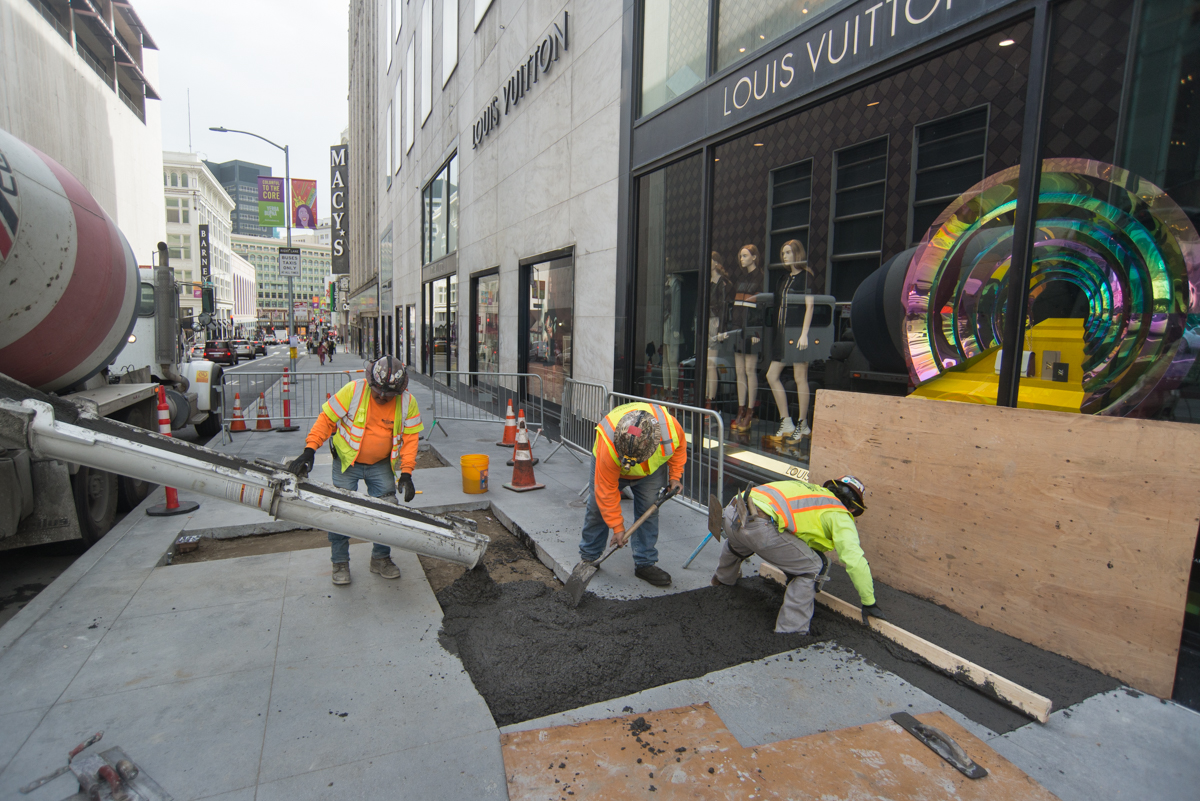 A crew pours concrete on to fill a last few panels of sidewalk following the reopening of Stockton between Geary and Ellis. Overview 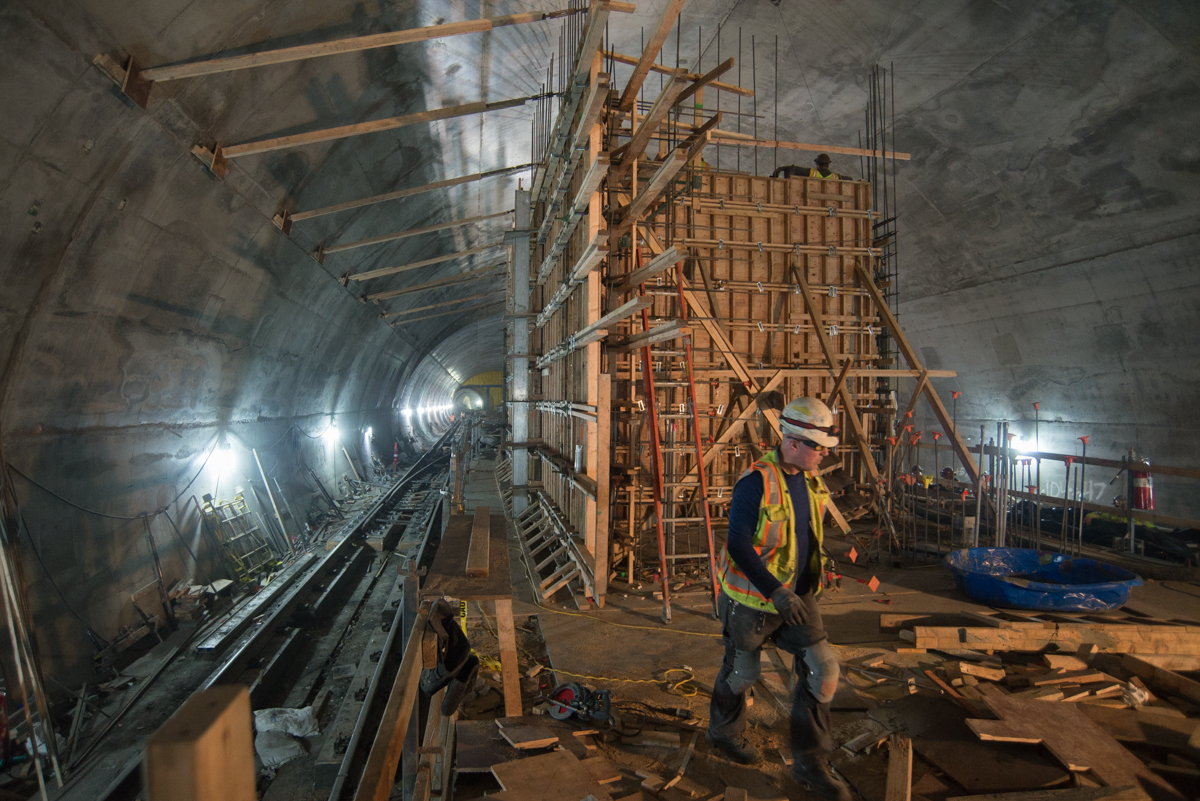 Current activities include construction of the north and south platform caverns, cross-cut cavern, track crossover cavern, and interior structural elements of the station headhouse.  The sidewalk along the west side of Stockton between Washington and mid-block toward Clay has temporarily been closed to facilitate utility upgrade work.  A pedestrian walkway is open on the north side of Washington connecting Trenton and Stockton.  Work to build the north egress shaft on Stockton south of Jackson is underway. 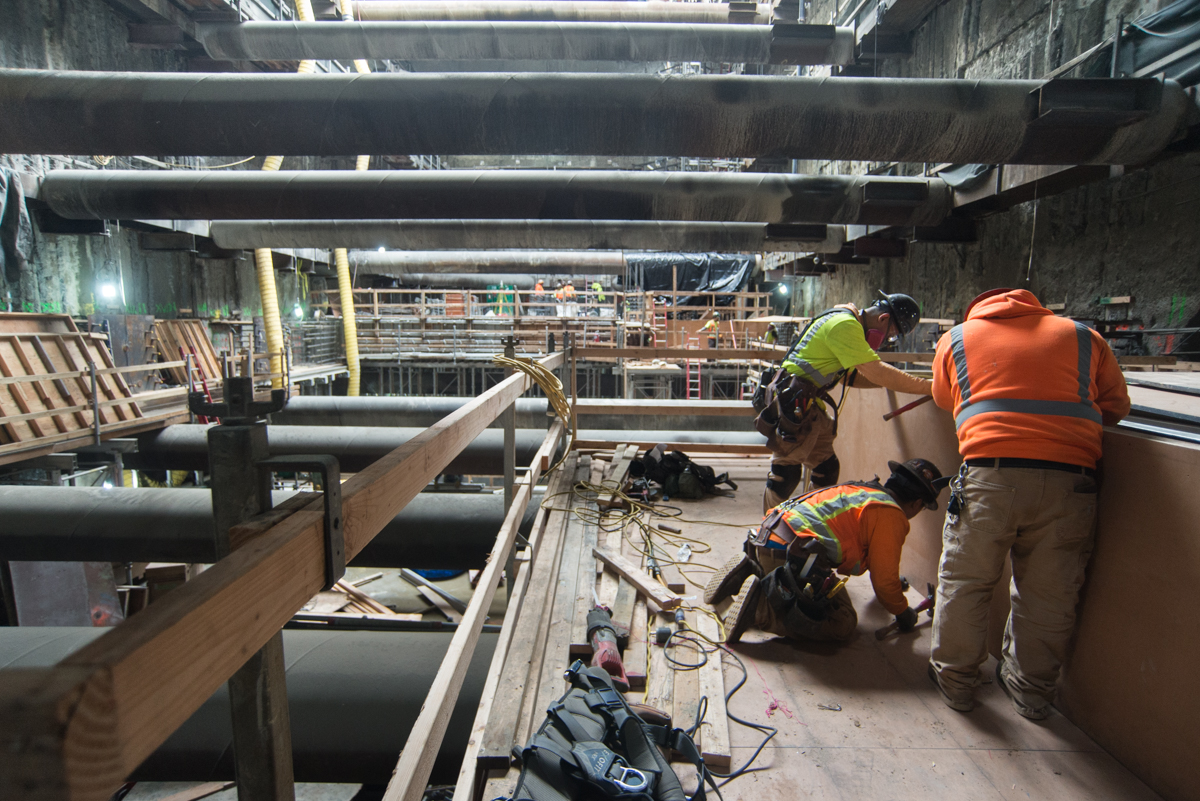 Carpenters build sections of concrete forms on the level above the Chinatown Station concourse, inside the headhouse. 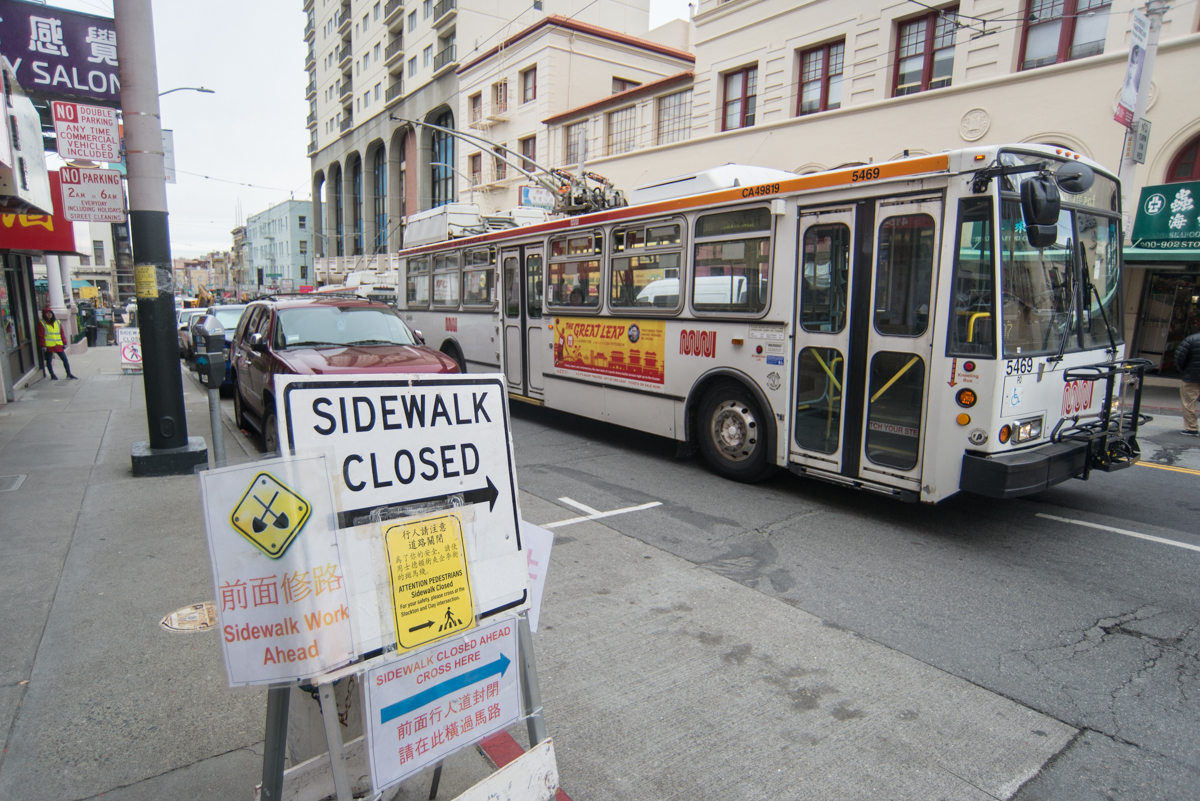