All LRV4 Doors and Two-Car Trains Back In Service

This week the agency announced the unlocking of the back door and the resumption of two-car train service on the new LRV4 trains.

All single panel train doors, which are located at the ends of each car, have been retrofitted with additional sensors. In addition, the train couplers, which allow for the connection of two trains, have been modified to allow safe operation of two-car train service.

Between November 2017 and April 2019, there were three incidents that involved the rear-door that resulted in a passenger injury. The most recent incident was on April 12, 2019, when a passenger tried to hold open the rear door and fell into the trackway at Embarcadero Station. Siemens, the train manufacturer, developed an updated door design that provides two additional sensitive edges, including one on the exterior side of the single panel door. This provides increased sensitivity to account for a broader range of obstructions with the doors. 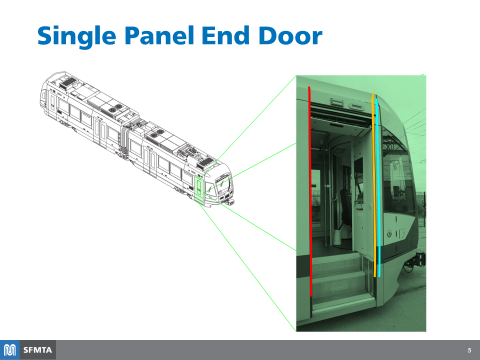 Customers should always avoid holding the doors open in any way. Preventing the doors from closing can damage the door mechanism, cause service delays and it can also be dangerous.

On April 11, 2019, a two-car train with no passengers onboard experienced a coupler failure. Couplers are a train component that allow multiple vehicles to operate under the control of one operator. Upon inspection, Siemens and the SFMTA found broken shear bolts that were a symptom of a design flaw within the coupler. Siemens addressed the design flaw, inspected all vehicles and replaced the shear bolts. They are also in the process of replacing any coupler units that were damaged and expect to be complete by the end of July.

These repairs allow for the continued rollout of these once-in-a-generation trains that are more comfortable, reliable and rider-friendly. These cars are part of a fleet expansion that will add more train service to reduce crowding and improve service for hundreds of thousands of daily riders.