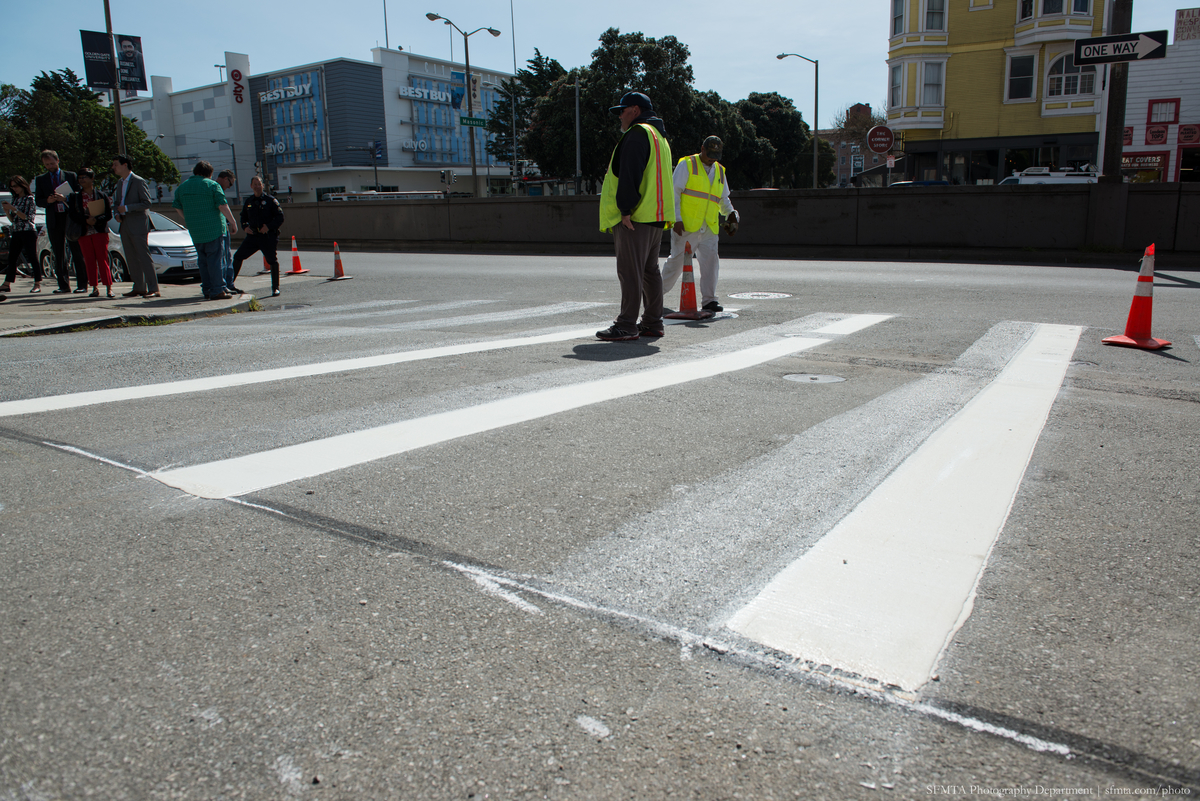 Reflections on the recent traffic fatalities on Geary Boulevard and on Lincoln Way led this morning’s press conference to announce 33 new crosswalks on Geary and a speed limit reduction on Fulton Street. These improvements are part of Vision Zero, the city’s goal of getting traffic deaths to zero by 2024. Our condolences go out to the families and friends of the people who died. We still have a lot of work to do so that inevitable mistakes on the street don’t lead to serious injury or death.

At 11:30 a.m. this morning the SFMTA’s Director of Transportation, Ed Reiskin, stood with Mayor Ed Lee and Supervisor Eric Mar at the corner of Geary and Emerson, next to the Public Storage off of Masonic, to highlight the city’s ongoing efforts to make our streets safer by implementing numerous improvements, such as hundreds of zebra-striped crosswalks. Mayor Lee, Supervisor Mar and Ed all had a try (and did quite well) at laying down the first layer of thermoplastic striping paint to upgrade the crosswalk. The Mayor also announced the change of the speed limit on Fulton (between Arguello and Great Highway) from 35 to 30 mph.

If you are interested in learning more about the city’s Vision Zero efforts and how you can help, please visit www.visionzerosf.org.

The San Francisco Municipal Transportation Agency (SFMTA), which manages all surface transportation in the city, including the Municipal Railway (Muni), today joined Mayor Edwin M. Lee and District 1 Supervisor Eric Mar to announce the completion of work to install zebra-striped crosswalks along various Geary Boulevard intersections, as well as the implementation of a reduced speed limit on Fulton Street between Arguello and the Great Highway. The two pedestrian safety projects in District 1 are in support of Vision Zero, San Francisco’s goal to eliminate all traffic deaths by 2024.

“Even one traffic fatality in San Francisco is unacceptable, and we are committed to making our city’s streets safer for all road users,” said Mayor Lee. “Straight-forward and practical solutions like new crosswalks and traffic signals will help move us towards our Vision Zero goal of zero traffic fatalities in San Francisco by 2024.”

Over the past several months, the SFMTA has upgraded 33 intersections on Geary Boulevard with bolder, zebra-painted crosswalks which increase pedestrian visibility. Geary Boulevard is on San Francisco’s “High Injury Network.” This network is made up of 12 percent of city streets that account for 70 percent of severe and fatal traffic injuries across all modes of transportation.

Until recently, the SFMTA had primarily implemented these high-visibility crosswalks near schools and at mid-block crosswalks. As part of Vision Zero, the city’s goal now is to gradually enhance all crosswalks with this new pattern. So far, hundreds of crosswalks citywide have been upgraded on streets like Geary Boulevard, 3rd Street and Guerrero Street.

"We need to end the culture of speeding and dangerous driving in San Francisco, and lowering speed limits and improving crosswalks are powerful tools," said District 1 Supervisor Eric Mar. "Improvements like these can save lives, but we must act faster to prevent tragedies like the one the city suffered yesterday."

With high traffic speeds being the strongest predictor of whether people are killed or seriously injured when hit by a car, the city also recently completed a speed limit reduction on Fulton Street from Arguello to the Great Highway from 35 MPH to 30 MPH. Since 2011, the SFMTA has reduced the speed limit on 13 streets citywide, such as Sunset Boulevard, Howard Street, the Broadway Tunnel and John Muir Drive.

“Our goal of zero traffic fatalities by 2024 isn’t just about numbers, it’s about using all the tools we have to make sure everyone is safe in San Francisco, from kids walking to school to seniors strolling the neighborhood,” said SFMTA Director of Transportation, Ed Reiskin.

San Francisco adopted Vision Zero as a policy in 2014, committing to build better and safer streets, educate the public on traffic safety, enforce traffic laws, and adopt policy changes that save lives. The result of this collaborative, citywide effort will be safer, more livable streets as San Francisco works towards the Vision Zero goal of zero traffic fatalities by 2024. For more information, go to: www.visionzerosf.org. 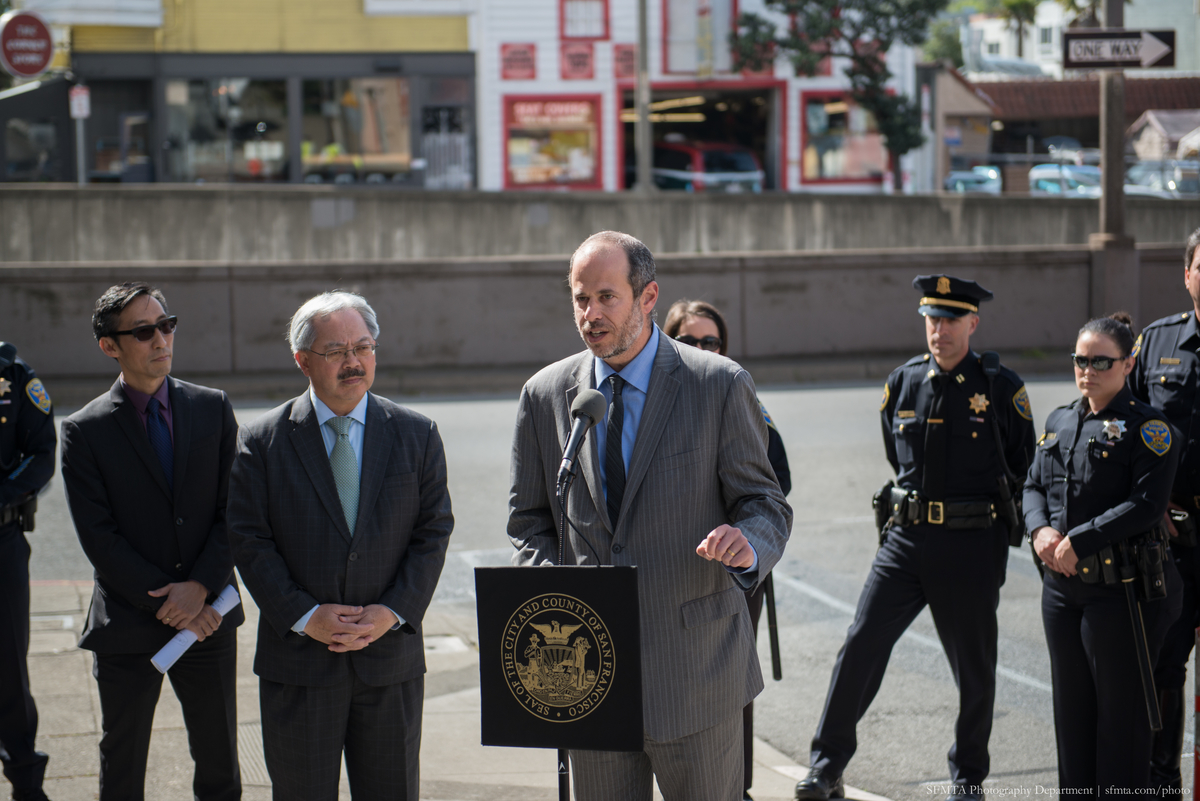 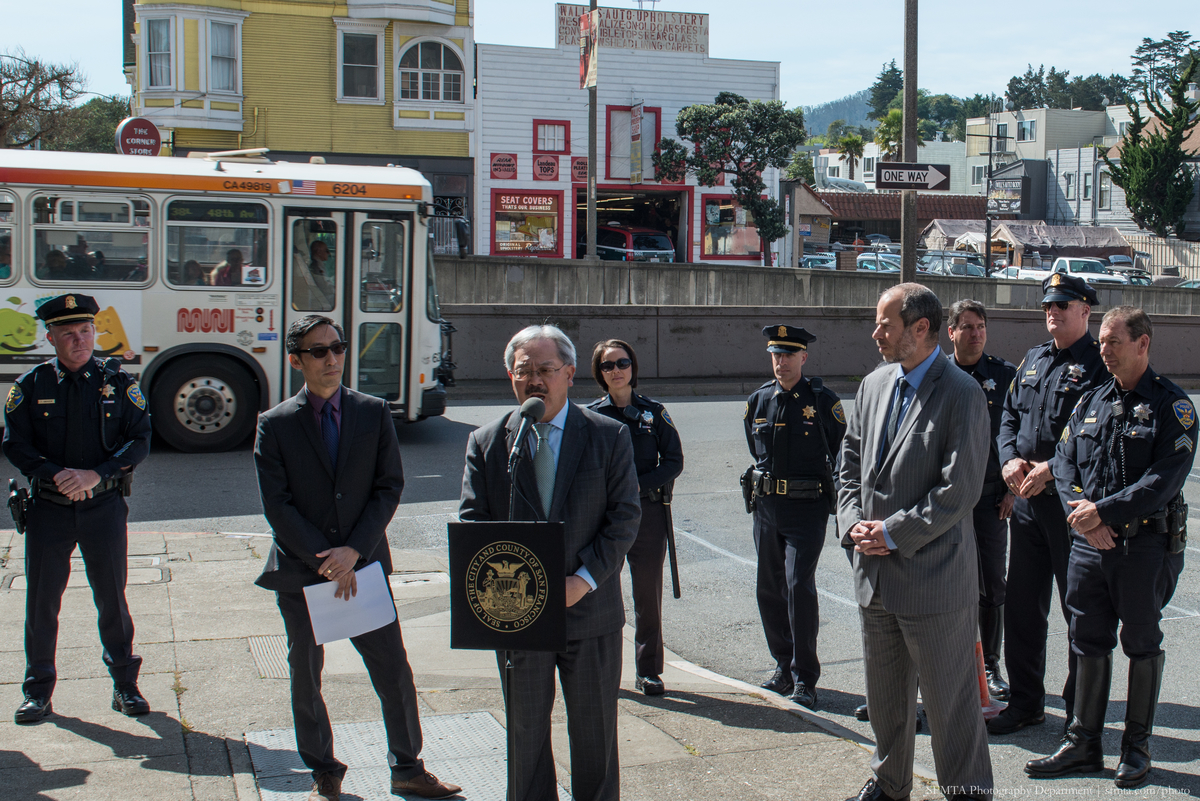 Mayor Lee highlights the importance of moving swiftly to implement "straight-forward and practical solutions" for making our streets safer. 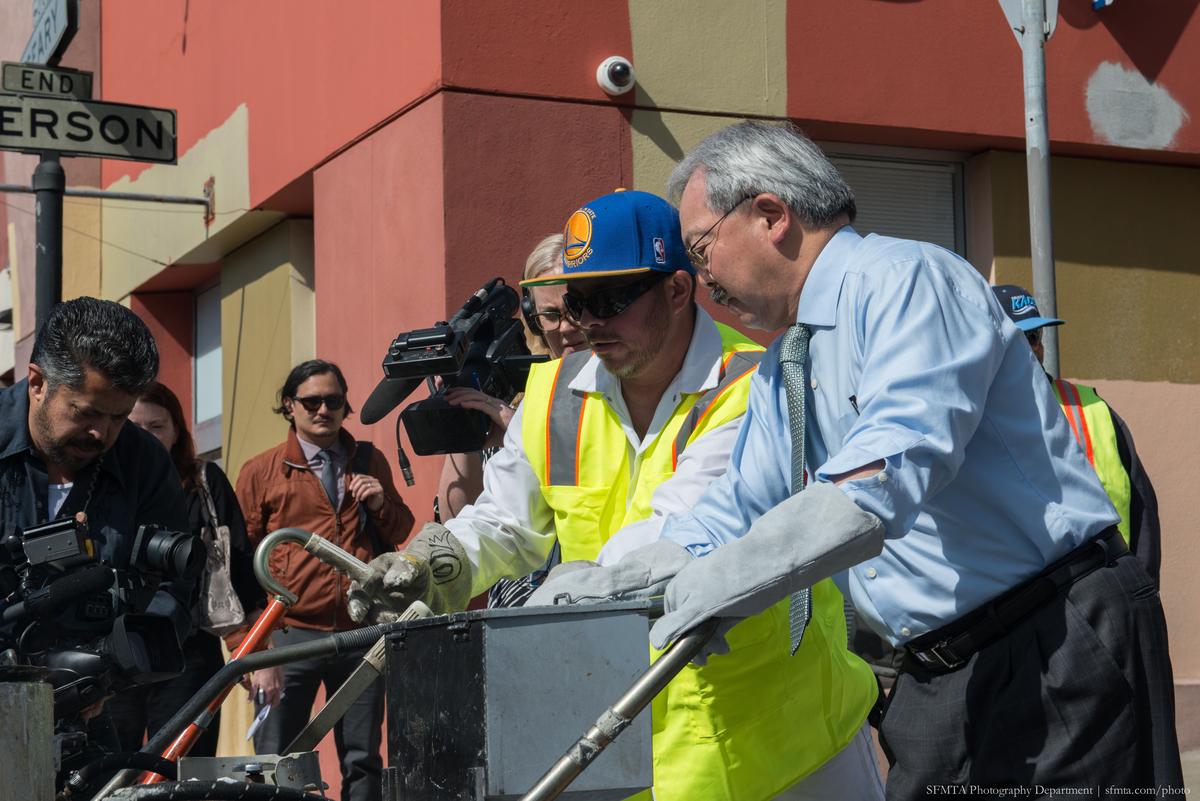 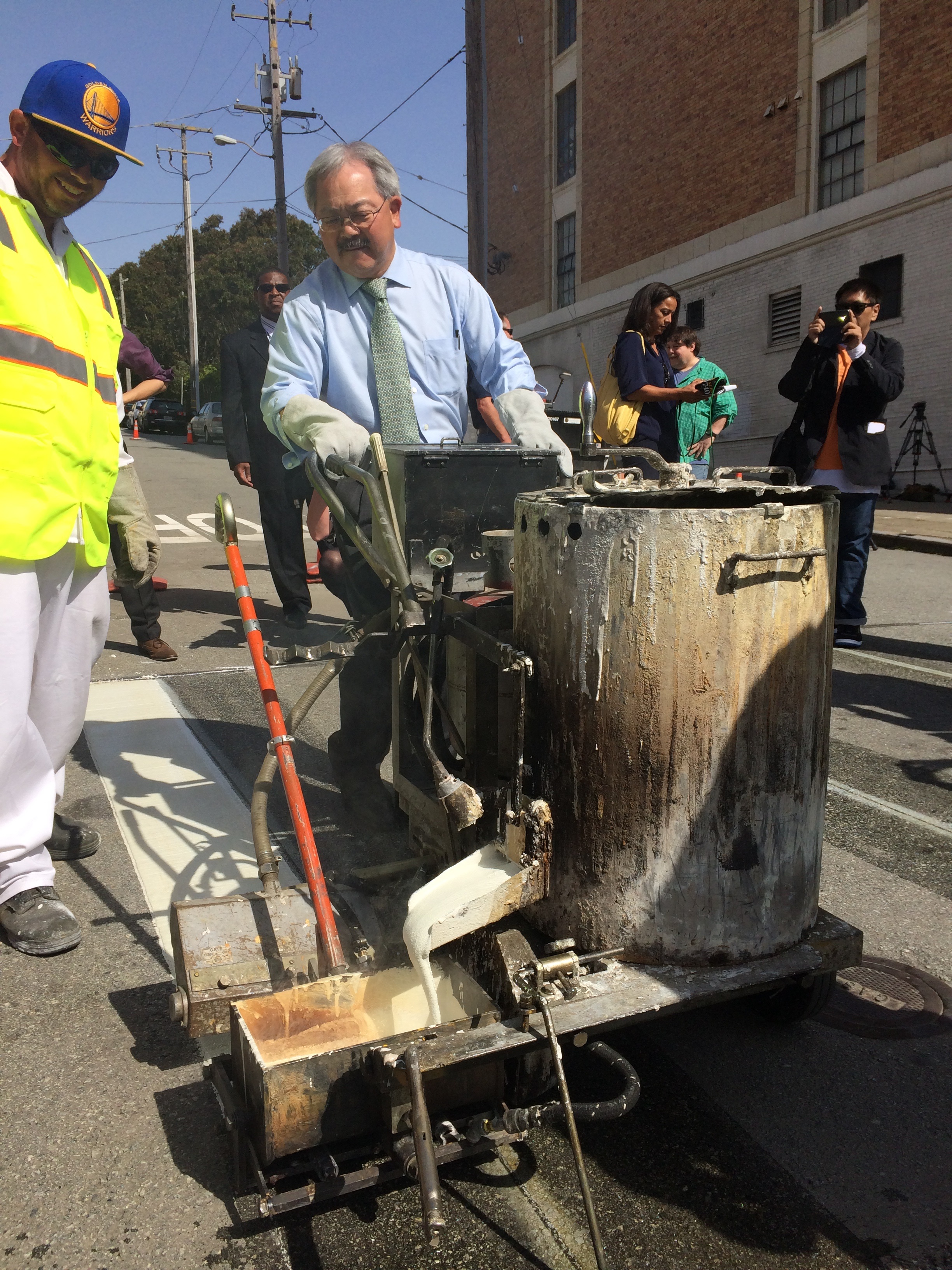 As Mayor Lee lays down the first stripe of paint for the zebra-striped crosswalk, the professionals on the paint crew declare him a natural.
Neighborhoods
Outer Richmond