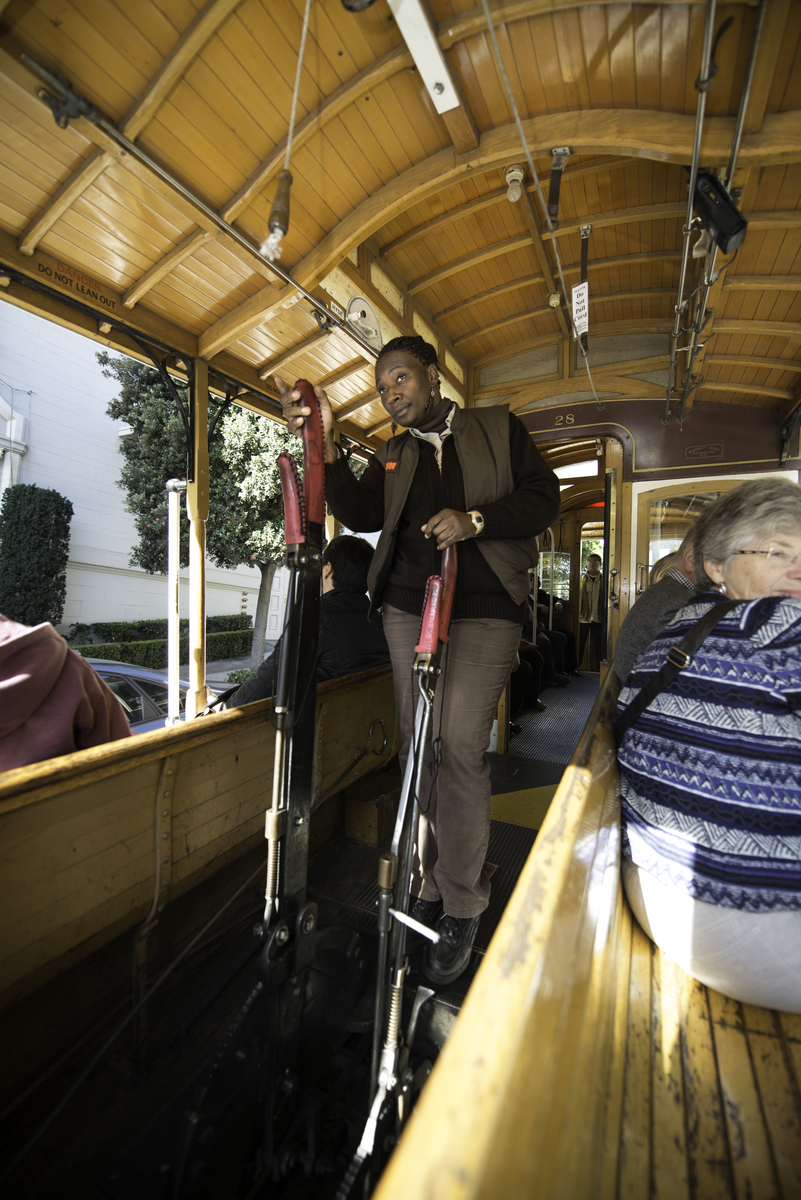 With her certification as a cable car grip on April 12, 2010, Johnson became only the second woman in 142 years to helm the iconic symbol of San Francisco transportation.

On the job now for five years, Johnson sends the previously accepted term of “gripman” into the history books. She’s shattered the record of her predecessor and close friend Fannie Mae Barnes, who retired from active cable car duty in 2002 after serving just over two years as a grip and conductor.

Johnson, currently on medical leave, seems almost embarrassed to admit that she tore a tendon in her right hand after hitting it on the cable car brake. Out since May, she’s anxious to return to her five-day-a-week, 9 a.m. to 6 p.m. shift as a grip on the Hyde Cable Car Line. That’s where she often times sees her longtime friend, Barnes. The two have maintained a warm relationship that has developed and matured over time.

“She brings her grandkids to cable car to ride,” Johnson says with a smile, adding that the two rarely go more than a few months without seeing each other.

“I still have the pink grip covers [leather covers used on the cable car brake handle] she gave me when I started in 2010,” Johnson says, “It’s just that they’re a little soiled now.”

After two years as Local 250-A secretary for Cable Car Division from 2008 to 2010, Johnson felt the need to switch from conductor to grip to fully understand the needs of her fellow union members.

“I didn’t feel that I could represent them effectively until I understood exactly what it is that grip persons do,” Johnson said.

Grip persons are located in the front of the car and are responsible for operating the various hand and foot controls that propel and stop the 15,500-pound vehicles. Conductors are usually based at the rear of the cable car.

There was another reason Johnson wanted to move up front. “I like a good challenge,” she says, flashing a devilish grin.

Challenging it was. The affable Johnson failed in her first attempt — as do approximately 80 percent of all applicants who take the month-long training course. Demanding and unforgiving, gripping a cable car requires jet fighter-type pilot skills: arm, hand and upper body strength; mental and physical coordination; and the confidence and determination of a bull rider.

The majority of those who fail in their first attempt do not return for a second. Johnson did. Though only of average stature, she credits regular workouts for building the strength required for the job. When asked what she’s learned after half a decade on the job, Johnson is quick to answer.

“It’s a stressful but challenging job. A lot of people try and don’t make it,” Johnson says. “I don’t have a lot of complaints, except for traffic on Powell Street.”

When Johnson returns to work in the next month, she will continue her legacy as Muni’s only female cable car grip. She joins Barnes and the late Maya Angelou — one of Muni’s first female streetcar conductors — as pioneers who have helped opened the doors for other women in the transportation industry. Cable Car Division currently employs four female conductors: Rashawn Smothers, Cassandra Griffin, Illa Ames and Catrena Brown.

At their initial meeting in 2010, Barnes presented Johnson a custom-made set of pink, leather grip covers and told her that she was “handing over the torch to her.” Johnson thanked Barnes and with a smile acknowledged both women’s place in San Francisco transportation history.