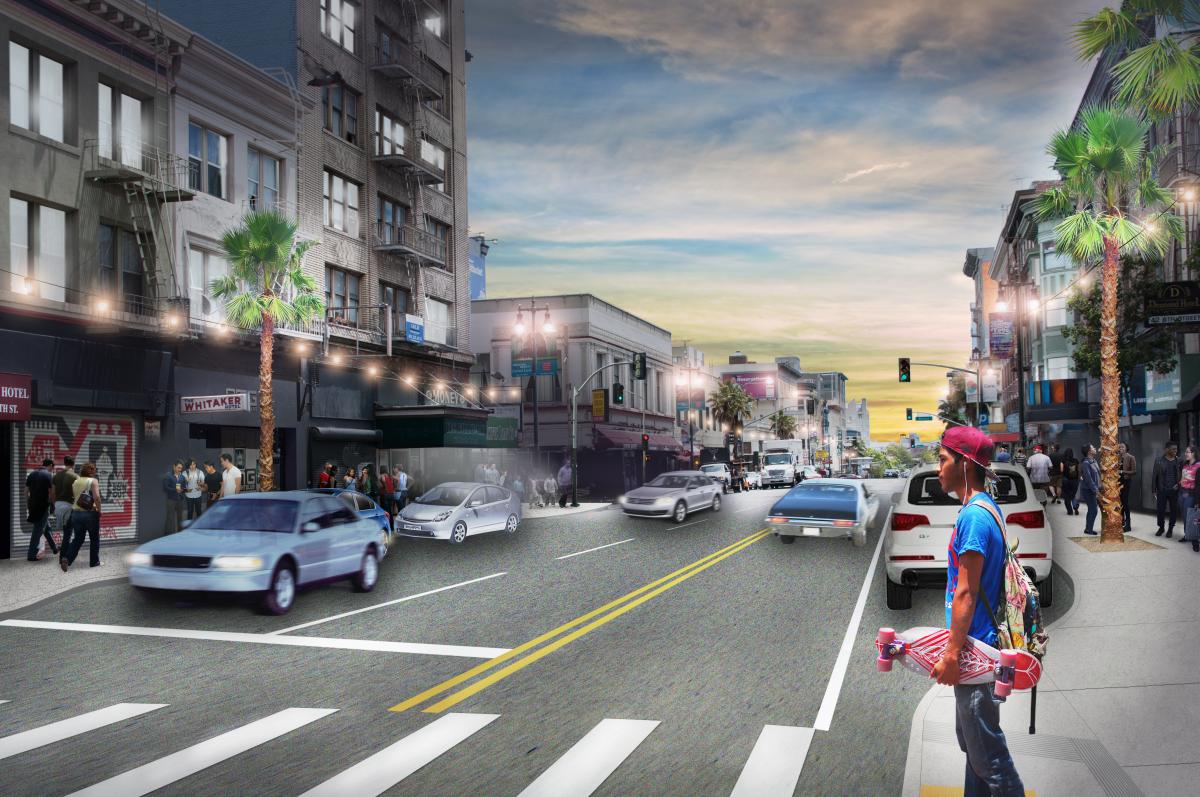 Rendering of 6th Street between Market and Howard Streets.

When planning for new projects in Downtown San Francisco, the SFMTA must look at potential sites through multiple lenses:

This dual-pronged approach allowed the SFMTA to address immediate safety issues along 6th and Taylor streets while collaborating with San Francisco Public Works to bring capital improvements to these corridors. We’re excited to share that capital construction is beginning on 6th Street in February, and work will begin on Taylor this spring!

6th and Taylor streets are among the 13%  of city streets that account for 75% of severe traffic injuries and fatalities known as the Vision Zero High-Injury Network. The communities that live along these corridors largely consist of seniors, children, people with disabilities, limited English proficient people, and lower-income families—all of whom face higher risks of traffic collisions resulting in injury and/or death.

Both the 6th Street Pedestrian Safety and Safer Taylor Street projects were legislated in the fall of 2018. Within a year, the SFMTA constructed its first quick-build improvements along 6th and Taylor streets to address critical pedestrian safety needs. These included:

These changes reduced opportunities for conflict between motorists and sidewalk users while accommodating the community’s various street usages. After implementation, evaluation showed a 21% decrease in vehicle speeds on average along 6th Street, and a 100% reduction in double parking along Taylor Street. Larger capital projects take time to design and bid, but the SFMTA did not have to compromise time for street safety. The quick-build improvements were installed while the projects’ construction-heavy streetscape elements were still being refined. 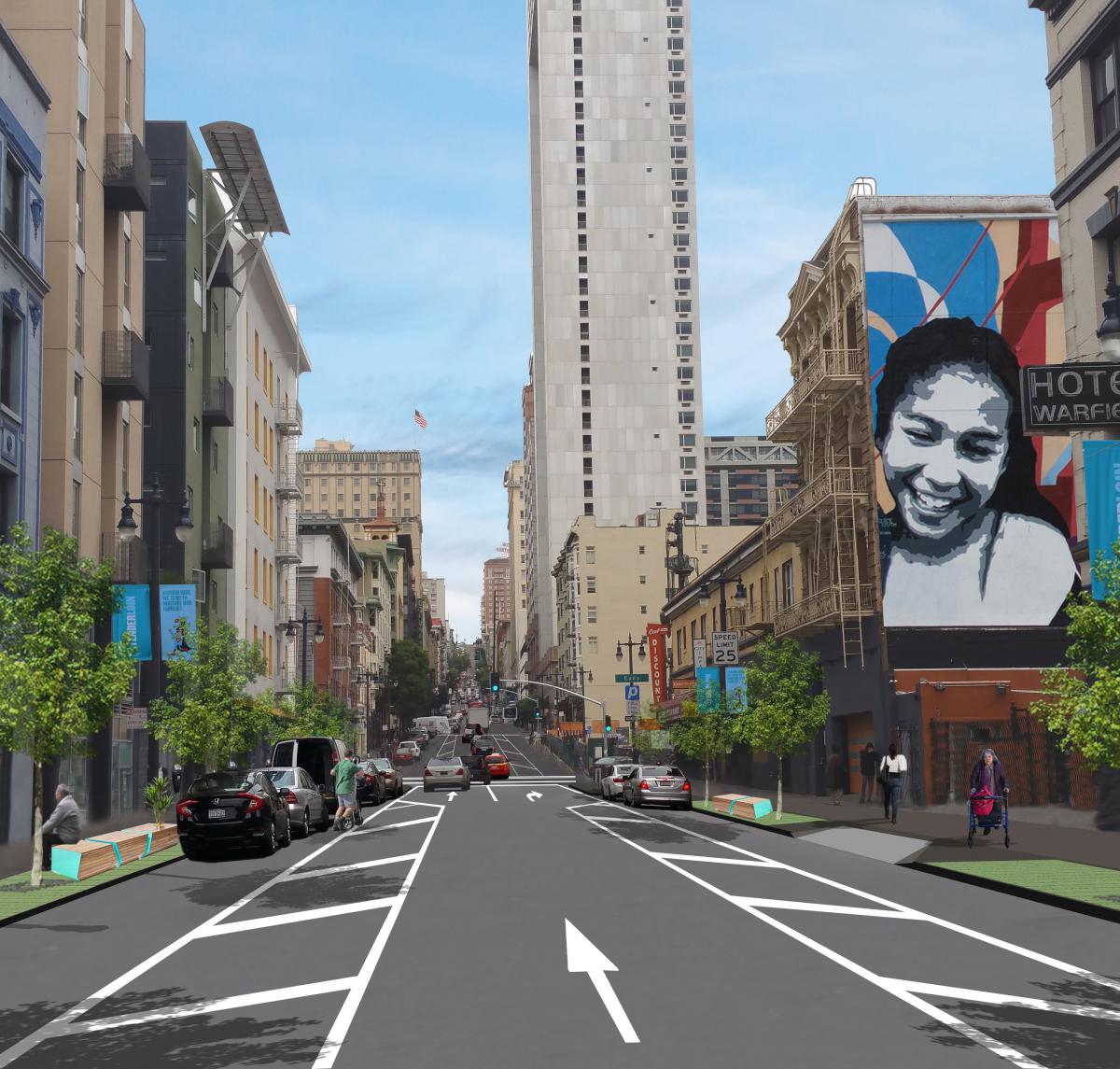 Rendering of Taylor Street between Turk and Ellis Streets.

While quick-builds address many of the immediate traffic safety needs, the capital streetscape improvements that are beginning construction now—including signal improvements and landscaping features—create more durable safety features and quality of life improvements. Many downtown residents live in small quarters like single-resident occupancy (SRO) properties, often with little to no outdoor space. The sidewalks along these corridors often function as an extension of people’s homes. Widening the sidewalks will enhance the space and allow a clear path of travel, especially for those using mobility devices, like wheelchairs.

Throughout the process from quick-build to capital construction on these corridors, we’ve partnered with local organizations to get the word out to community members about the planned improvements. This winter, our partners at Code Tenderloin hosted three information pop-ups in the project area, where they served barbecue and chatted with residents about the upcoming streetscape changes. Over the course of long-term construction projects like those beginning at 6th and Taylor streets, building community trust and creating channels for consistent communication, especially with hard-to-reach populations, is essential.Code Tenderloin is planning more events to keep people informed. Subscribe to the SFMTA project email lists to learn more! 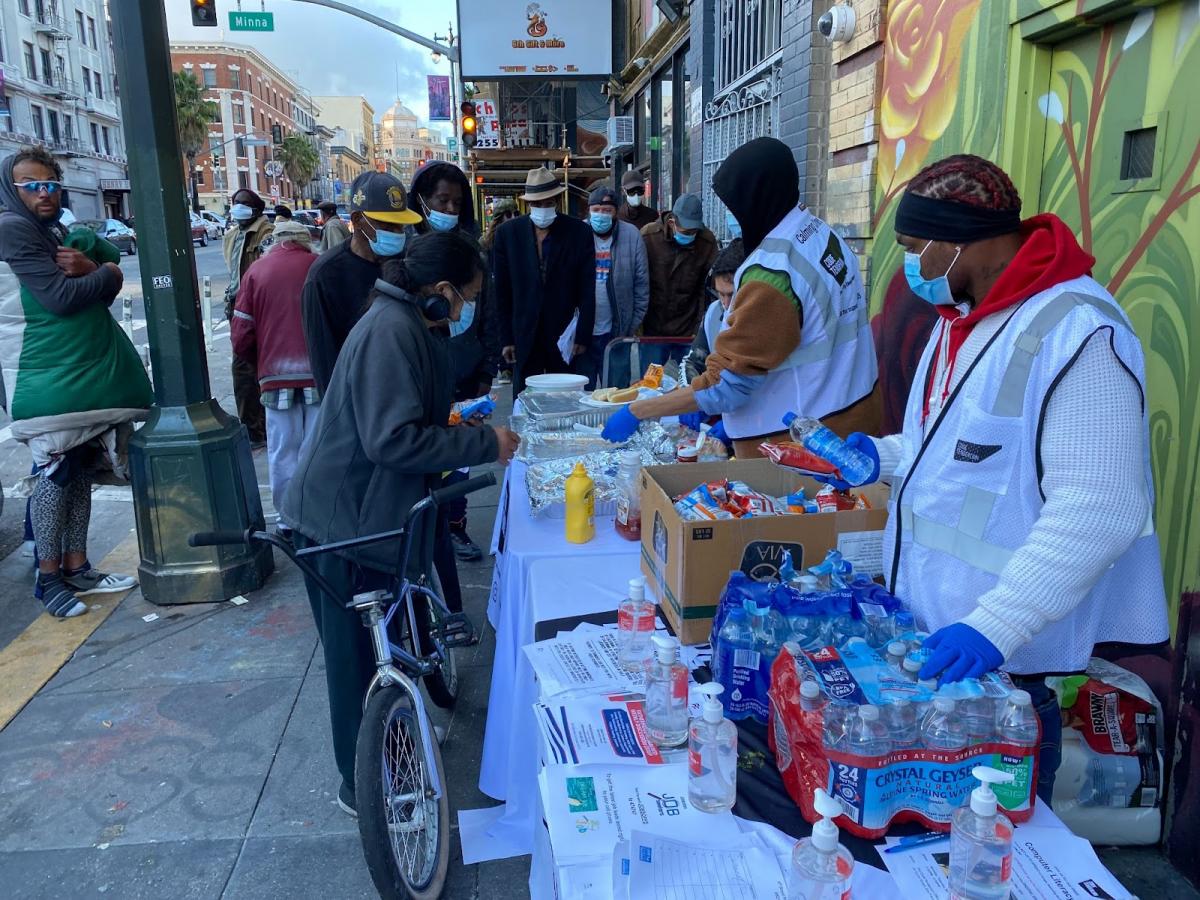 Capital improvements also allow for more possibilities to incorporate community elements and identity. 6th Street is part of the Filipino Cultural District, and both 6th and Taylor streets are part of the Transgender District, the first legally recognized transgender district in the world. Throughout the detailed design phase, we have been working closely with local groups such as SOMA Pilipinas and The Transgender District to implement community-identifying decorative crosswalks. These improvements will build off the previous quick-build work to further enhance safety and livability for people walking along these corridors.

Since fall 2018, the SFMTA and Public Works teams have been diligently designing construction plans that include sidewalk widening with corner bulb-outs to shorten crossing distances and reduce speeds of turning vehicles, new and upgraded utilities and traffic signals and streetscape amenities such as new trees, benches, and decorative crosswalks.

These project elements will continue to enhance the walking, biking, shopping, and living experiences of the 6th and Taylor Street communities. Due to unique issues below street level involving utilities and sub-sidewalk basements along the project corridors, these projects will require extensive construction.

While the SFMTA led the planning and legislation processes of these projects, we will be handing the baton to San Francisco Public Works to manage implementation and construction communication. If you haven’t already, head to the SF Public Works 6th Street Pedestrian Safety Project page to sign up for updates. As construction begins, both agencies will continue to reach out to the community to minimize disruption to merchants, residents, and visitors along 6th and Taylor streets. For more information, please visit 6th Street Pedestrian Safety Project and Safer Taylor Street.