Share this: FacebookTwitterEmail
By
Mark De Anda (no longer with the SFMTA)
Friday, April 29, 2016

Those are some of the key reasons there’s been an 18 percent dip in overall crime on Muni between February 2015 and February 2016, according to SF Police Department Lieutenant Tim Paine.

“My teams are out there,” Paine said, “and we take crimes on Muni seriously.”

Paine is the SFPD officer in charge of the Muni Enforcement Team, directing the Muni Task Force, Muni Response Team and the Muni K-9 unit. Paine, who reports to SFPD Commander of Transportation and Security Ann Mannix, works collaboratively with the SFMTA’s head of Security, Investigations and Enforcement, Chris Grabarkiewctz, to thwart criminal behavior on the city’s public transportation system. 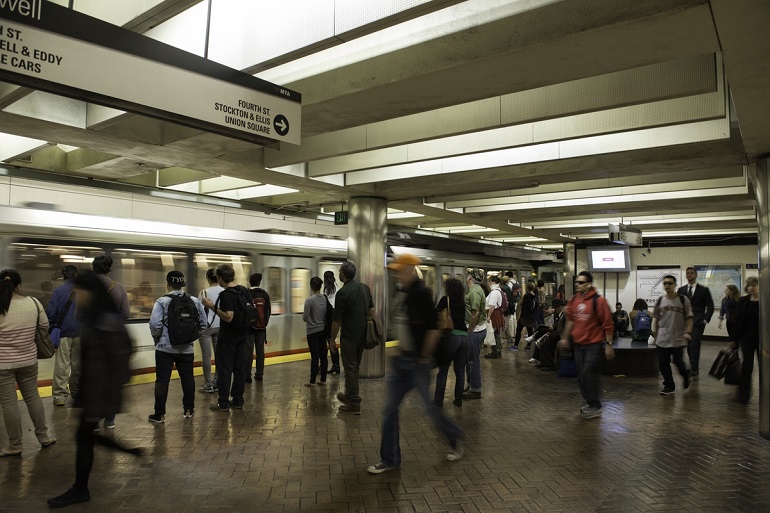 Each team under Paine’s jurisdiction serves a specialized function to dissuade or stop crime on Muni.

The Muni Response Team provides a uniformed presence on Muni vehicles and supports the transit fare inspectors. They are considered the “Muni beat cops” who know the routes, lines and Muni crime hot spots. Muni’s K-9 team is responsible for explosive threat assessment and detection and are often seen at work in our subway system.

Using data-driven policing, Paine deploys each of his teams to areas where crimes occur most often. Using a combination of SFMTA and police CompStat crime statistics, Muni’s enforcement team can see where specific crimes are occurring by location, time of day or other criteria. Most crimes on Muni are handled by police district stations, handed off to a district investigator when necessary, and then forwarded through to Paine and Grabarkiewctz. 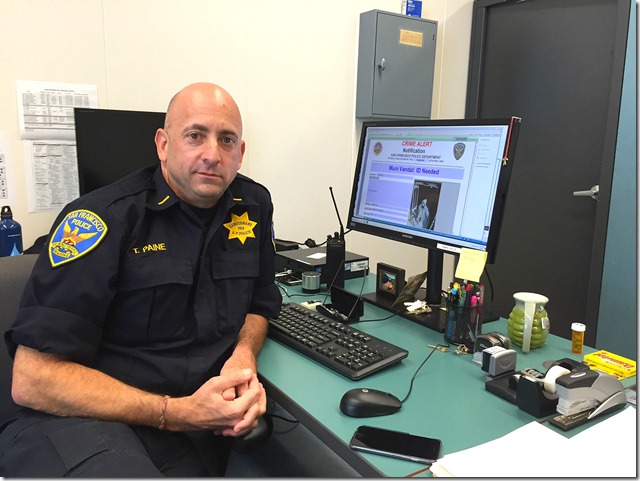 Lieutenant Tim Paine, the SFPD officer in charge of the Muni Enforcement Team.

Advances in technology and coordination

As we speak, Paine’s computer monitor shows an image of a young man who intentionally shattered the glass on a Muni door in one of the city’s 10 police districts. The full-face image pulled from surveillance footage is as clear as a high school yearbook picture. It was captured by one of the nine to 16 cameras on every Muni bus and light rail vehicle.

Photos and/or video of perpetrators are sent out across the police department, either via e-blast or a secured YouTube channel, by investigators from district stations where the illegal activity occurred. That information is electronically transmitted to each of the other nine police district captains and to every member of the SFPD — nearly 2,000 officers.

Paine points out the clarity of the photo on his monitor, which he hopes will help lead to the vandal’s identification.

“As you can see, the picture quality is fantastic. So in this case, following up on what MTF could do is they can look at this guy and say, ‘since I ride the lines, I know where this was,’” Paine said. “Or they could say, ‘this looks like the same guy that did this a week ago, and he did it in the same area.’ At that point my plainclothes MTF officers can go and see if they can locate him.”

An SFPD Gang Task Force member who receives the photo, Paine points out, may be able to help identify a subject based on the color of his clothing, through prior contact or arrests, or through gang markings. In essence, the new cameras and internet technology make it easier for SFPD officers to positively identify criminals — particularly repeat offenders — capture them, and prosecute them to the full extent of the law. Fifteen years ago, Paine recollects, the fuzzy, single-angle videos were essentially useless.

“So we can take our expertise with looking at Muni videos and Muni lines along with the full weight of all the experts within the SFPD and come together to solve more of these crimes,” Paine said.

Still more work to do

Paine will be the first to admit he’d like to see more officers on his SFPD enforcement team. Additional enforcement support, he stresses, is needed to put a serious dent in crimes such as fighting, vandalism and theft — the top three illegal activities on Muni vehicles in February 2016.

“We hear it all the time,” Paine said. “People want more cops, and I would love nothing more than to put a uniform officer on every single bus, every single line and have officers on every street corner.”

Still, advancements in technology and having the institutional knowledge of the entire SFPD available is helping take a bite out of Muni crime.

“We want Muni riders to know that we’re not just writing reports and being reactive, but that we’re taking an active role and doing our best to get a prosecution and a conviction.”