Keeping Score on the SFMTA’s Sustainability Efforts on Earth Day 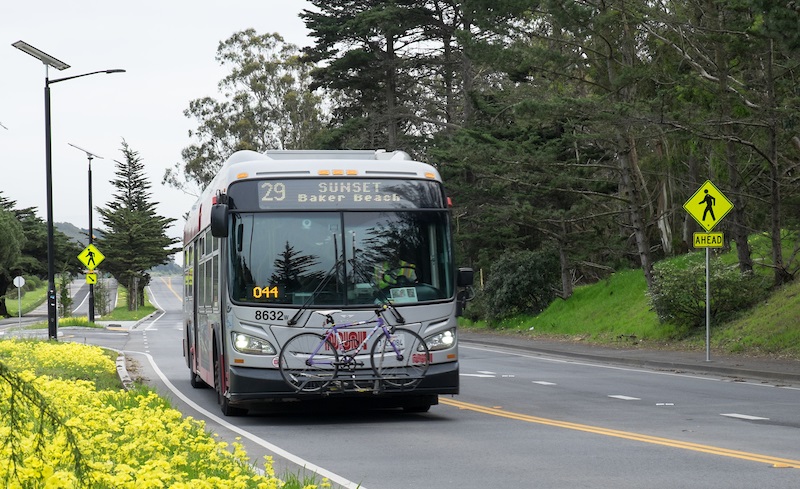 A hybrid electric Muni bus on Mansell Street in McLaren Park, which was recently redesigned with a beautiful path for walking and biking.

Earth Day was started in 1970 to foster forward-thinking initiatives that would benefit the environment and the planet. At the SFMTA, we continue to meet that call to action with more achievements each year.

As Mayor Ed Lee announced this week, San Francisco reduced its greenhouse gas emissions to 28 percent below the 1990 levels in 2015, two years ahead of our goal to do so by 2017. Greenhouse gas emissions come from electricity, natural gas, fuel, waste and transportation, which is one of the largest contributors in the city, at about 46 percent (mostly from cars and trucks).

At the SFMTA, where we oversee Muni and all of San Francisco’s surface transportation, Earth Day’s message of sustainability is embedded in nearly every aspect of what we do every day.

Overall, the SFMTA has reduced its greenhouse gas emissions by 90 percent since 1990. In just the past year, we reduced our carbon footprint by nearly 45 percent. There’s a reason we’re one of just four agencies to have received Platinum Level status for sustainability from the American Public Transportation Association.

Here are a few highlights of recent progress we’ve made in making SF more sustainable:

Muni’s fleet is now one of the greenest in the nation.

Most trips in San Francisco are made by walking, biking and transit.

You can celebrate the planet on Earth Day this Saturday, April 22 at the Earth Day festival at Civic Center Plaza. Learn more about it and other events taking place this weekend in this week’s “On Tap” post.