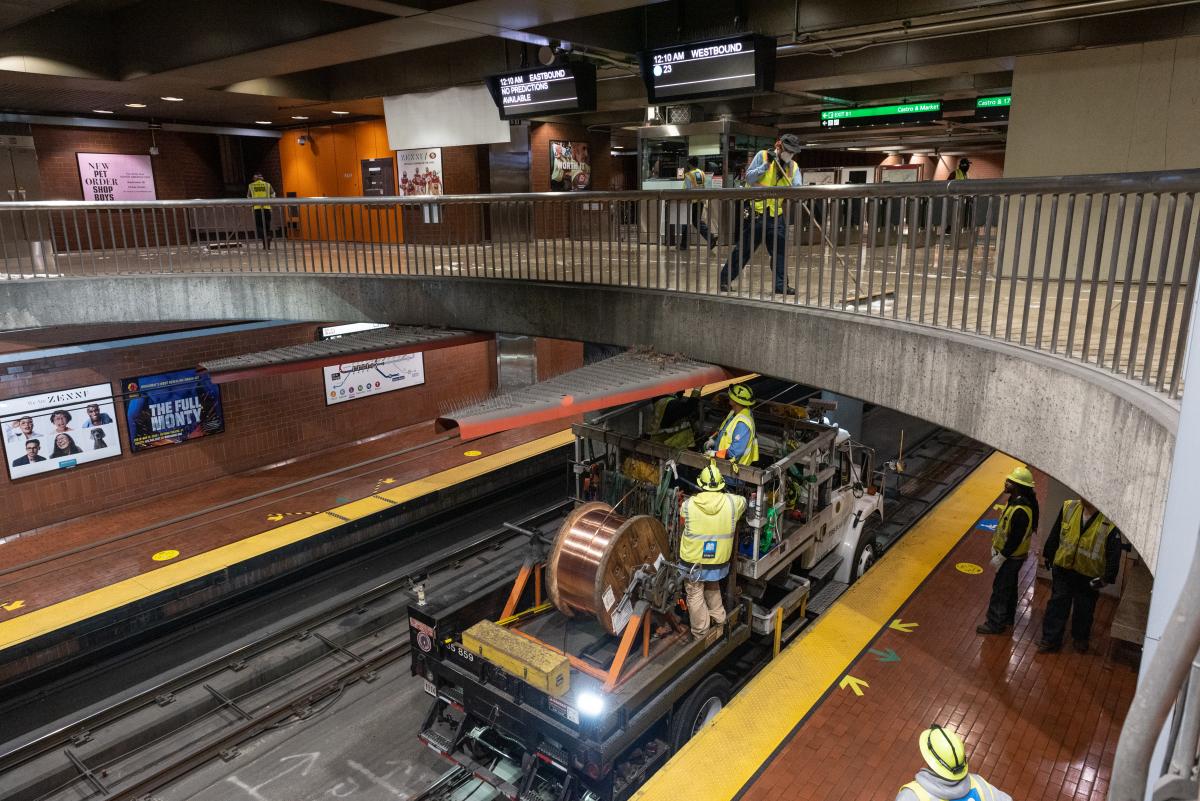 A new quarterly effort to increase work time to accomplish necessary Muni Metro system maintenance in April 2022 was a resounding success. Here is a behind-the-scenes video recap. The maintenance initiatives aimed at making subway operations more reliable and preventing feature breakdowns. The maintenance teams were able to perform an entire month of work within the 10 days when subway service was substituted by bus service to provide SFMTA workers the extended Fix It! Week work window.

Every night after Muni Metro subway service hours, SFMTA maintenance crews work to maintain the tracks and equipment underground. On most nights, this gives our teams only about two hours to get work done. During the first Fix It! Week, from April 14 to April 23, 2022, buses provided substitute service for Muni Metros lines and the subway between Embarcadero and West Portal was closed early for work to begin at 9:30 pm. These nightly early shutdowns gives SFMTA maintenance crews more hours to complete infrastructure improvement works underground that cannot be completed during the normal windows.

The Fix It! Week provided 56 total work hours, during which several SFMTA teams completed over 2,000 hours of maintenance and inspections. On the busiest nights, the maintenance teams had up to 55 staff in the tunnel from West Portal to Embarcadero delivering safety improvements, station and tunnel enhancements, subway track and wayside equipment maintenance, and traction power upgrades.

Each night during Fix It! Week, custodians from the Buildings and Grounds teams did deep cleaning at West Portal, Forest Hill, Castro, and Church stations, while the Maintenance Engineering staff was in the tunnel inspecting and collecting data. Stationary engineers from Mechanical Systems in various stations focused on safety enhancements such as installing new safety handrails at the platform ends, new ventilation for station agent booths, new pump covers, fire and life safety systems, and new electrical room ventilation.

The Overhead Lines crew also used Fix It! Week to replaced 600 feet of wire at Castro Station while the Track Maintenance team brought two pieces of 1,500-pound stock rail in and out of the subway. The Motive Power crew replaced emergency battery systems and worked with all-electrical clearance holders to restore systems on time for rail service to restart as the Signal team removed legacy train control systems for future upgrades. The Underground team and the Paint Shop staff also contributed to this remarkable accomplishments. The Cable Car division, who had not previously participated in extended maintenance periods, did channel and conduit cleaning and checked and confirmed all wires were in good condition during the April Fix It! Week.

Many people in the support team who were not doing the maintenance but coordinating the efforts all helped to make Fix It! Week successful. They ensured safety standards were being upheld, critical repair priorities were being addressed, and the subway was being reopened to restart rail service on time every day.

Muni operations and transportation infrastructure are vital to San Francisco’s economic vitality, environmental sustainability, and cultural diversity. The FY 23 - FY 24 SFMTA Budget will continue to invest in infrastructure improvements to keep the Muni Metro system in a state of good repair. Thank you for your patience and understanding while we improve the safety, reliability and on-time performance of the Muni Metro system.

The next Fix It! Week will be happening in August of 2022.