Share this: FacebookTwitterEmail
By
Luis “Loui” Apolonio
Friday, May 6, 2022 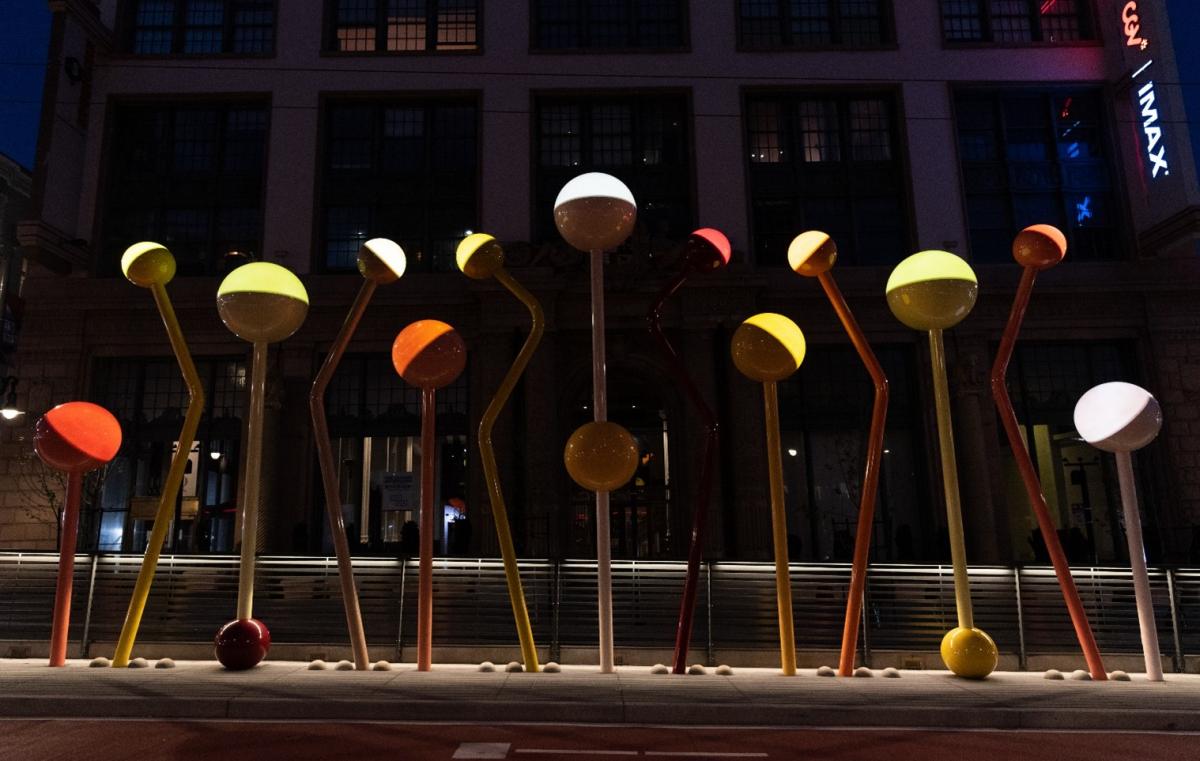 Spectators gathered both online and in person to watch new lighting sculptures on Van Ness turned on for the first time on March 31, 2022. The whimsical and brightly colored sculptures located on the new Van Ness BRT boarding platform between Geary and O’Farrell are made of steel with LED lights inside on a timer set to illuminate at night.

The lighting event was kicked off with SFMTA Director Jeff Tumlin and MTAB Chair Gwyneth Borden serving as emcees. Mary Chou, Director of Public Arts and Collections at the San Francisco Arts Commission, spoke about the art installation itself, as well as the process for selecting the artist who would be awarded the project. In addition, Maddy Ruvolo, a member of the SFMTA’s Accessible Services team and a recently appointed member of President Biden’s U.S. Access Board, shared the importance of having accessibility as a part of transportation projects.

However, the true star of the evening was the light sculpture itself—the two installations at the intersections of Geary and O’Farrell streets are parts of a single piece of art. At a prime location among the culture, arts and civic life of Van Ness Avenue, this artwork is meant to inspire conversation.

Contrasts among Pardo’s modern fixtures provide pops of bright color and light against the architecture and more muted tones nearby. The light sculpture at once stands out as being unique and colorful while also complementing the space in which it exists without competing with the surrounding visual elements in the area.

Cuban-American artist Jorge Pardo described the sculpture as “an urban coastal redwood.. it is made of steel, light and weather… it is young not old… it comes out of the concrete…not the soil…it does not grow… its purpose is to orient and remind… maybe of the past... maybe the present... it is an urban machine…”

Pardo, who is based in Los Angeles, is an internationally acclaimed contemporary artist and 2010 MacArthur Fellow known for colorful, architectural, thought-provoking designs. His work is displayed in Miami, Berlin, New York and Paris, and now San Francisco.

The San Francisco Arts Commission selected his proposal which was then shared with the public for comments in 2015. San Francisco’s commitment to public art is codified in the 1969 Arts Enrichment Ordinance, which mandates a percentage of construction costs be earmarked for public art.

Pardo’s creations provide plenty for San Franciscans to discuss. Next time you’re on a bus traveling down Van Ness, visit the new installation and be sure to catch a selfie of yourself with the sculptures.

Published in memoriam of our colleague, Luis “Loui” Apolonio.