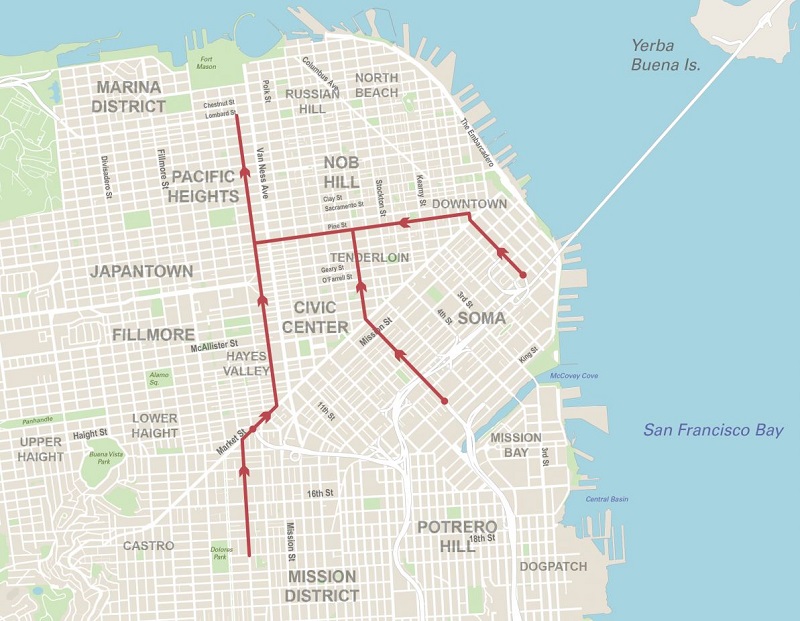 This Friday the left turn on northbound Van Ness Avenue at Hayes Street will be permanently removed as part of the Van Ness Improvement Project. As the construction zone extends south, traffic lanes on Van Ness and South Van Ness between Mission and McAllister will also be shifting on July 12.

The Van Ness Improvement Project is a major overhaul of Van Ness Avenue between Lombard and Mission streets, bringing much-needed utility replacements and a host of other transportation and street-level upgrades that include San Francisco’s first-ever Bus Rapid Transit System. Another major goal of the project is to improve safety, as Van Ness is part of San Francisco’s High-Injury Network – the 12 percent of city streets that see 70 percent of collisions that result in serious injuries or fatalities. Left turns are one of the leading causes of these collisions in San Francisco.

After the left-turn at Hayes is removed on July 6, the only left turns allowed from Van Ness will be northbound at Lombard Street and southbound at Broadway. Removing left turns on Van Ness not only creates safer conditions for people walking on Van Ness, but it has also allowed the SFMTA to re-time traffic signals on Van Ness and neighboring streets to improve traffic flow.

Drivers who currently make left turns from Van Ness Avenue onto Hayes are advised to test new routes before the turn is eliminated on Friday, to help facilitate a smooth transition. We have some tips listed on our project page.

The construction zone on the west side of Van Ness Avenue will extend from Sutter to Mission streets and on the east side of Van Ness Avenue from Lombard to Sutter. In this current utility phase of construction, crews are replacing the 1800s-era water and sewer systems beneath Van Ness, reducing their vulnerability to damage from earthquakes and minimizing potential service outages. They are also overhauling portions of the emergency firefighting water system, which supplies more than 1,200 fire hydrants throughout San Francisco. This work is projected to continue into mid-2020.

With the project shifting into the next zone of construction, we are closer to having a safer and more efficient Van Ness Avenue for the thousands of San Francisco residents and visitors that live or travel along this historic corridor every day.

For more project details and to sign up for construction updates, please visit our webpage.