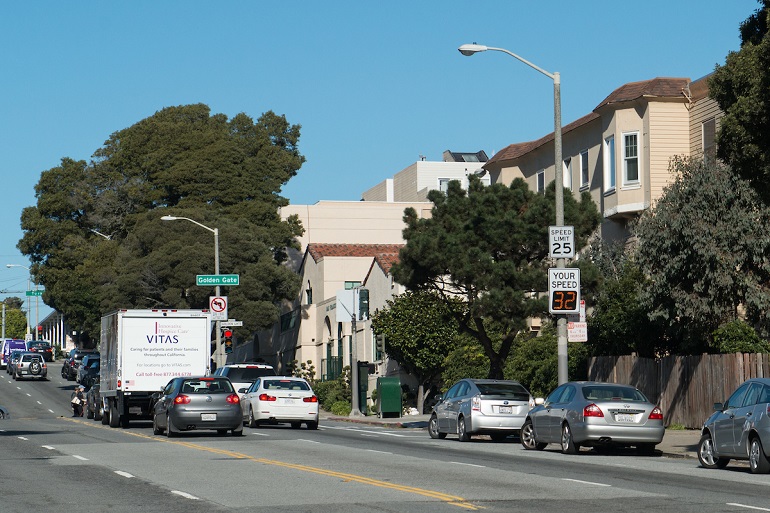 Nearly 42,000 traffic citations were issued last year by the San Francisco Police Department for the top five traffic violation categories, and a quarter of them alone were for speeding.

Unsafe speed is also a leading cause of traffic deaths in the city. That’s why the city just launched a new round of radio ads focused on reducing speeding as the city pursues its Vision Zero goal of eliminating traffic deaths by 2024.

The Vision Zero team launched the first round of that campaign in August with a series of 15-second radio spots in English and Spanish to do just that. Now we’re following up with the launch of a new round of radio ads designed to focus attention on safe speeds.

Speed is a crucial factor in collisions. Research has shown that lowering speeds dramatically improves the likelihood someone will survive a collision. If you’re hit by a car going just 5 mph over the 25 mph speed limit, your chance of survival drops by half.

The Safe Speeds SF campaign was developed with feedback from focus groups and communitywide research polling. In this research, we found that while people feel that speeding is frowned upon in San Francisco, it is often perceived as something that only happens on freeways or outside of city limits. Additionally, drivers tend to consider themselves as above average in skill and therefore believe they don’t need to drive the speed limit.

The September campaign is designed to inform or remind drivers that:

Focus group participants who were frequent drivers in the city identified this approach as powerful, engaging and informative.

The first of these new round of ads began airing last week during drive time, as well as on Pandora and Spotify in San Francisco. They will run in English, Spanish and Chinese. You can listen to the English version online.

Starting in October, a third round of ads will be coupled with strategic police speed enforcement on key corridors with demonstrated high rates of speeding.