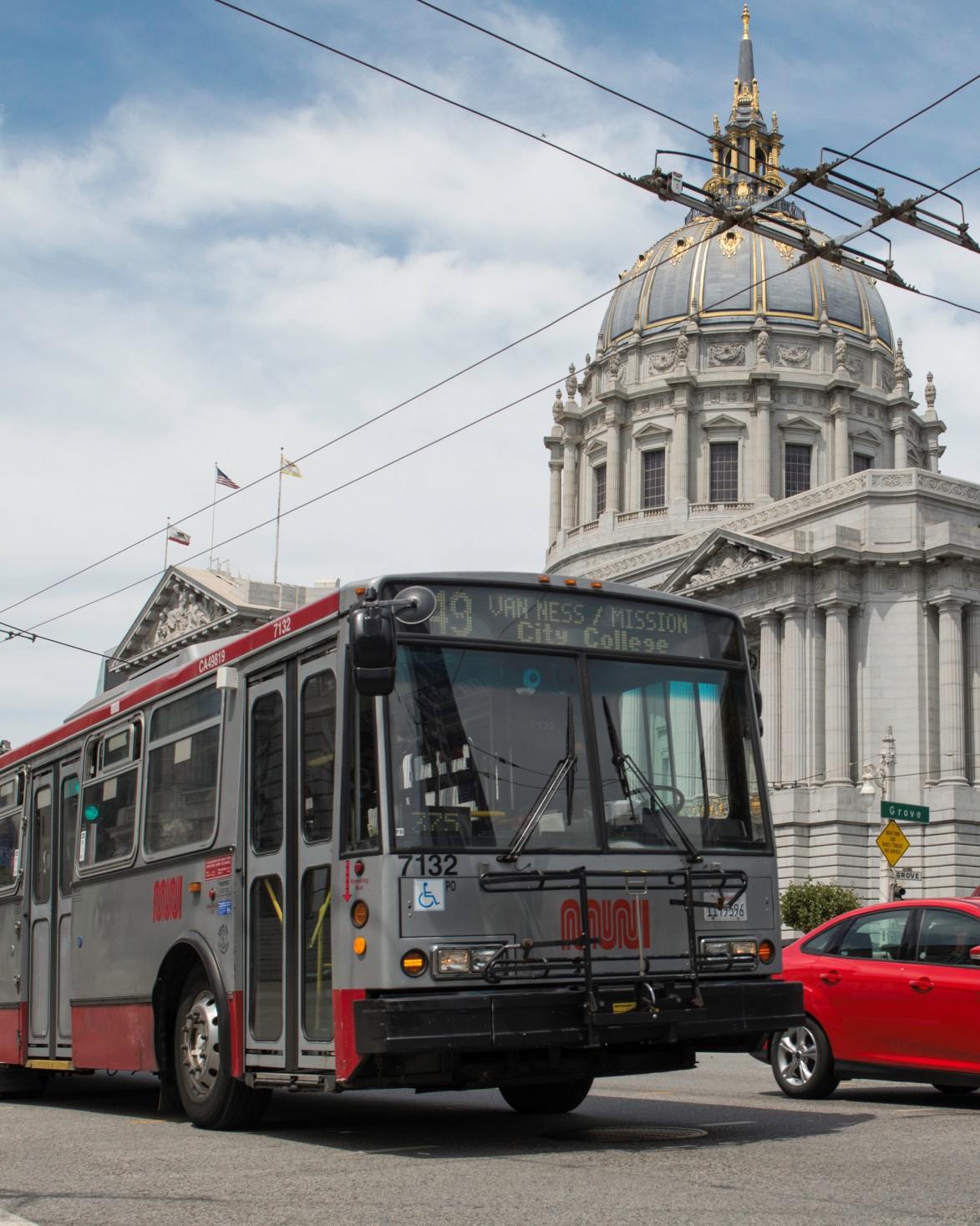 A 49 bus drives by City Hall on its route to City College. The Van Ness Corridor Transit Improvement Project will upgrade the street, including four blocks within the Civic Center Historic District.

The Van Ness Corridor Transit Improvement Project, which will include massive upgrades and improvements to a street that has played a critical role in shaping San Francisco, went before the Planning Department’s Historic Preservation Commission yesterday. While the project will shape the character of Van Ness Avenue, this agency and the project team are committed to honoring the history of the avenue and preserving key historic elements of the Civic Center Landmark District, bordered by Market Street, Golden Gate Avenue, Van Ness Avenue and 7th Street.

Our city prizes its history. When City Hall turned 100 this summer, thousands showed up to celebrate its birthday and historic roots. Honoring our city’s past, though, isn’t limited to centennial celebrations.

The Historic Preservation Commission is the official guardian of San Francisco’s history and is responsible for identifying and preserving landmarks. Any project affecting a city landmark or historic district must seek a Certificate of Appropriateness, the official stamp-of-approval from the city’s preservation experts. After a discussion of the project’s impact on the Civic Center Landmark District, the commissioners offered the project the approval needed to proceed.

To honor the rich history of the avenue, part of the Van Ness project will involve collaboration between project staff and city officials to develop and install permanent signs in the historic district to highlight and preserve some of the area’s unique historic elements and landmarks. One of these features includes a red-and-gold firebox in front of the War Memorial.

At the turn of the century, a network of fireboxes was installed throughout the city. Using telegraph technology, these boxes allowed the public to alert firefighters to emergencies. Over 2,000 of these antique boxes are still in use today. In fact, the San Francisco Fire Department still answers more than 1,000 legitimate calls made from them each year. The lone firebox within the historic district on Van Ness has stood in front of the War Memorial across from City Hall since 1899. The box will be preserved by the project and will continue to serve the city after construction ends.

The project will also preserve some of the historic walkways in the district: the brick-paved walkway in front of the San Francisco Unified School District and the iconic granite curbs throughout the historic district. The brick paving dates back to 1926, the same year the High School of Commerce and Nourse Theater (Auditorium) were built as part of the school district.

The Van Ness Corridor Transit Improvement Project, while bringing much-needed transportation improvements to the area, is committed to preserving these historic and character-defining elements of the area.

For more information on the project, please visit the project website. If you have specific questions, you can reach the project team directly at vannessbrt@sfmta.com or 415.749.2446.