Skip to main content
UPDATE: The 48 and 67 continue to reroute around the area of 24th btwn Shotwell and Folsom. https://t.co/UQ0vJNDL1h (More: 34 in last 48 hours)
Subscribe
At a Glance

SFMTA and Supervisor Kim Switch On Safety at 6th and Jessie

Share this: FacebookTwitterEmail
By
Ben Jose (no longer with the SFMTA)
Wednesday, November 21, 2018

Today, District 6 Supervisor Jane Kim joined the SFMTA Signal Shop to activate a new traffic signal at the intersection of 6th and Jessie streets, which has been on that network of high-injury streets for too long.

In support of the city’s Vision Zero goal to eliminate traffic deaths in San Francisco, the intersection has been transformed from an unsignaled, mid-block crossing, to a safer place for pedestrians. Work recently completed includes:

In the past five years, the intersection had six reported pedestrian crashes and was quickly identified as a candidate for range of traffic safety improvements. As part of the broader 6th Street corridor, which has the City’s highest rate of traffic collisions, the safety improvements are a welcome addition to the neighborhood. 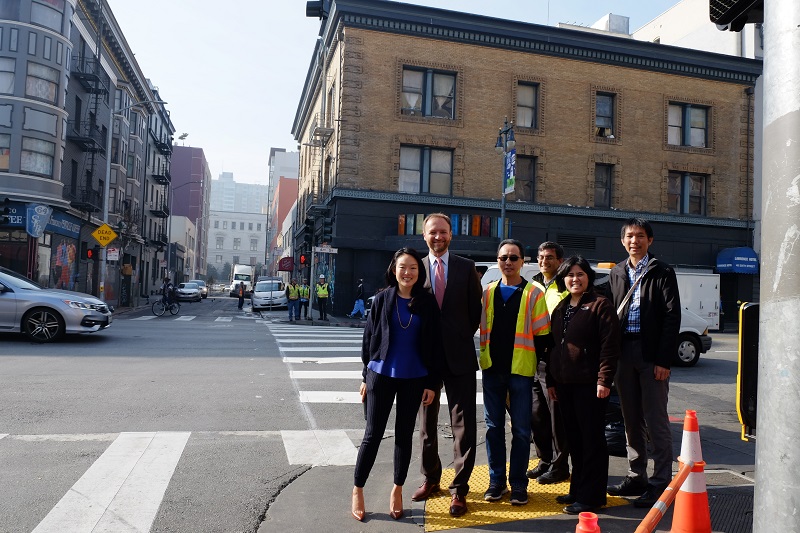 The safer crossing benefits everyone in the community, from small business owners and visitors, to long-time residents and at-risk populations, including people with disabilities and the homeless.

Design and construction for all the improvements cost $620,000 and was funded by the Proposition A Transportation General Obligation Bond funds, approved by San Franciscans in 2014.