Share this: FacebookTwitterEmail
By
Aaron Bialick (no longer with the SFMTA)
Friday, April 1, 2016

San Francisco’s investments in safer streets and a better Muni have never been sounder.

The SFMTA continues to be the safest bet in the nation, according to the major credit-rating firm Standard & Poor’s (S&P), which renewed its “AA” rating for the long-term credit of SFMTA revenue bonds and certificates.

The SFMTA’s credit ratings have been the highest among American transit agencies since 2014, when they were boosted by both S&P and Moody’s Investors Service.

The news continues a trend of growing confidence in transportation investments in San Francisco. In 2014, 71 percent of SF voters approved Proposition A, a $500 million bond which is bringing much-needed transportation improvements to the streets. 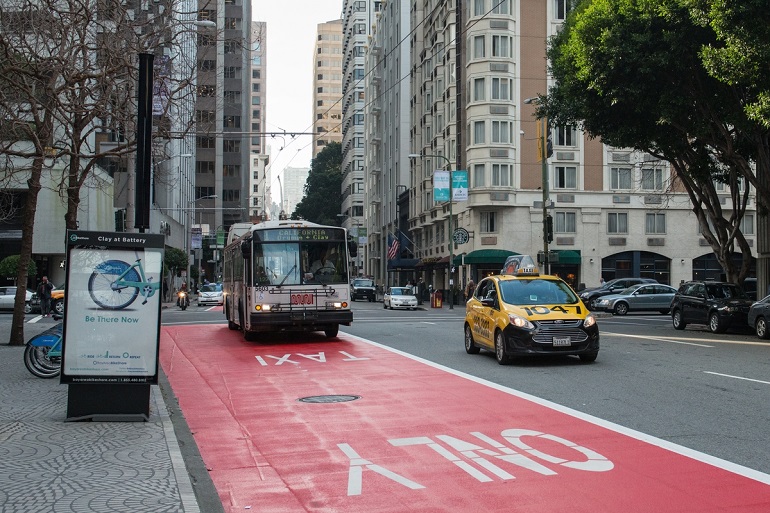 Muni runs stronger than ever in the Financial District - and in the financial department.

So, what makes the SFMTA so financially solid? S&P pointed to factors like:

“San Francisco is making investments in our transportation infrastructure every day, and at the same time restoring investor confidence that is backed by smart policies and responsible governance,” he said.

S&P uses a credit-rating scale from BBB (adequate) to AAA (extremely strong). Since 2014, S&P has raised the SFMTA’s ratings twice, from A to AA-, and then to AA. Copies of the detailed ratings are available on the SFMTA’s Investor Relations webpage.

The re-affirmed AA rating means lower payments on debt service will be required for the next revenue bonds we issue.

“Strong economic fundamentals and smart fiscal management is continued proof that San Francisco’s transportation infrastructure is a sound investment,” said Ed Reiskin, our director of transportation. “We will continue to work extremely hard to make responsible decisions that ultimately benefit those who rely on attractive transportation options in this city.”