Muni buses, formerly biodiesel, recently made the switch to renewable diesel fuel along with the rest of the city vehicle fleet, as Mayor Ed Lee announced earlier this month.

Renewable diesel is cleaner and easier on bus engines than the B20 Biodiesel fuel that most of the city fleet has used since 2007, when we switched from petroleum diesel. That means not just better air quality and lower greenhouse gas emissions, but also an improved Muni commute. 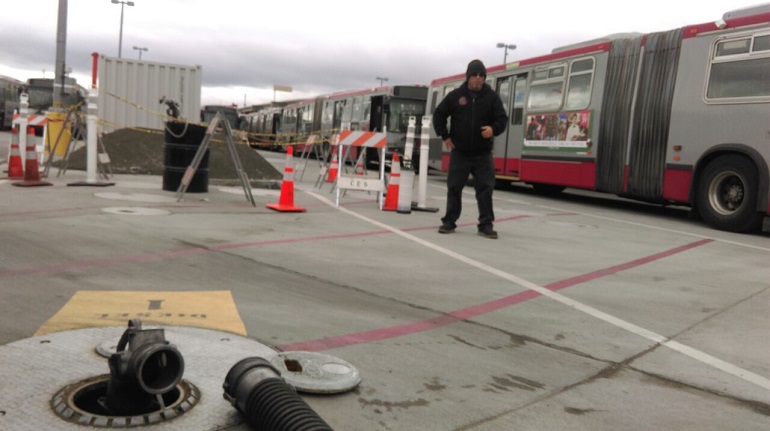 A hose sits next to a connector for an underground gasoline storage tank, with a Muni engineer and articulated motor coaches in the background.

It runs so clean, in fact, that the benefits sound “too good to be true,” according to one of the engineers at the Muni Islais Creek Motor Coach Facility, which recently filled its first tank of renewable diesel fuel. Muni’s motor coaches will require less maintenance, fewer gas re-fills, and less replacement filters and other equipment. In short, the new stuff will enable us to provide better service at less cost — all while making the fleet more sustainable.

“This change to renewable diesel reflects the high value that the SFMTA places on sustainability and recognition of our role in addressing climate change through sustainable transportation,” said Director of Transportation Ed Reiskin in a recent statement. “Even though Muni already has one of the greenest bus fleets in the country, we remain committed to making our system even cleaner and more efficient. I’m proud that we are able to make this immediate change to our fleets to further reduce greenhouse gas emissions and improve our air quality.”

To clarify, renewable diesel is not the same as the B20 biodiesel that our fleet previously used, which was supplied partially by the local GreaseCycle program. Both fuels are produced from numerous bio-feedstock sources, including fats, oils and greases, but the two fuels are produced through different processes. Renewable diesel uses a hydrogenation process, while biodiesel uses a transesterification process. According to the California Air Resources Board, the full lifecycle emissions of carbon from renewable diesel produced from sustainable sources are more than 60 percent lower than either petroleum or B20 biodiesel.

Chemically, renewable diesel is indistinguishable from petroleum diesel, and testing has shown it to have engine performance that matches or outperforms both petroleum diesel and biodiesel.

Muni riders are already enjoying new hybrid buses and electric trolley buses rolling out on streets across the city — and new trains are on the way as well. As we head into the new year, here’s yet one more reason to look forward to a better, fresher Muni.