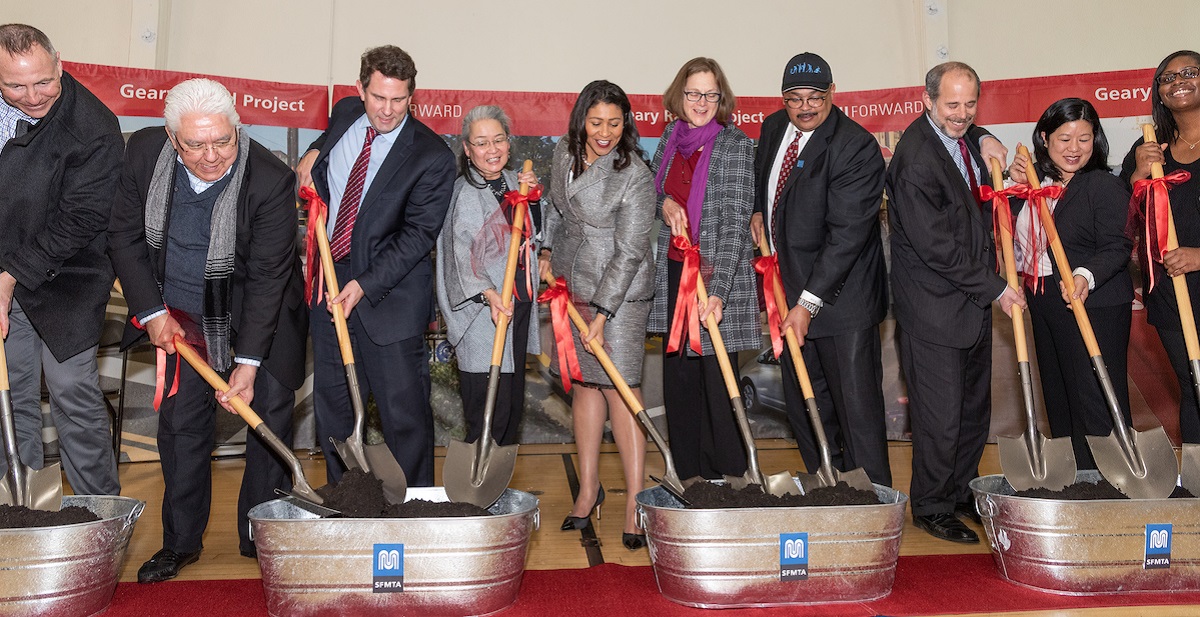 Earlier this month, Mayor London Breed, in partnership with the SFMTA and other City departments, officially broke ground on the Geary Rapid Project. This civic improvement project is bringing much-needed transit, safety and utility upgrades to one of San Francisco’s most-traveled corridors. With more than 54,000 daily customers who rely on the 38 Geary and 38R Geary Rapid, the Geary Rapid Project aims to improve the efficiency of the bus route, while making the corridor safer for people walking.

Construction is being coordinated with other City agencies. San Francisco Public Utilities Commission (SFPUC) is replacing one and a half miles of sewer and two miles of water pipelines along Geary, to repair these aging systems before they fail and require costly emergency repairs. Sewer and water replacement has already begun between Masonic and Van Ness avenues. That work will be followed by Public Works-sponsored roadway repaving, to rejuvenate 1.5 miles of deteriorated streets between Van Ness and Masonic avenues.

Members from the community were on hand to explain the artwork for median railings that will be installed at a new signalized pedestrian crossing at Buchanan, serving as both a physical and symbolic “reconnection” of communities divided by urban renewal. Each panel commemorates one of the three communities being reconnected: the Fillmore, St. Francis Square, and Japantown. For example, the bird medallion on the right, features the Sankofa bird representing the Fillmore. This traditional west African symbol illustrates the wisdom of looking back to one’s history and culture to inform the actions of the future. The border of eucalyptus leaves is a reference to Mary Ellen Pleasant who is the seated figure on the left panel. She came to San Francisco in the early 1850s and established the Western Terminus of the Underground Railroad. Charlie Parker also on the left, was one of many world-class jazz musicians who performed in the Fillmore over the decades that it was known as the “Harlem of the West.” And, in the cowboy hat is Mr. Wesley Johnson, Sr. who owned several bars in the Fillmore during its heyday, including the Texas Playhouse an important center for community gathering. Finally, across the panel is a staff of music – “Lift Every Voice and Sing” also known as the Black National Anthem.

The Geary Rapid Project is the first of two phases of improvements, planned for a three-mile stretch of Geary and O’Farrell between Stanyan and Market streets as part of the Geary Corridor Bus Rapid Transit project approved by the San Francisco County Transportation Authority and the SFMTA in 2017. The project builds upon prior improvements, including new low-floor buses and red transit-only lanes downtown.

For more Geary Rapid Project details and to sign up for construction updates, please visit our project page.