The Commuter Shuttle Program regulates employer-provided shuttles in San Francisco, charging a fee and requiring shuttle operators to adhere to a set of rules and regulations in order to access a network of shared Muni zones and shuttle-only white zones.

Commuter shuttles have existed in the Bay Area for decades, but their numbers have grown significantly in the last several years. In 2014, the SFMTA created the Commuter Shuttle Pilot program to test regulation of these shuttles in order to rationalize the network, reduce conflicts with Muni, and minimize private shuttle impacts on San Francisco neighborhoods.

During the Pilot, which lasted from August 2014 to January 2016, the SFMTA collected data from shuttle operators, riders, San Francisco residents, and community stakeholders. Based on this data, the SFMTA recommended a number of changes for a new Commuter Shuttle Program moving forward. In November 2015, the SFMTA Board passed legislation creating the new Commuter Shuttle Program. The Program went into effect in April 2016 with a term limit of one year.

In February 2017 the SFMTA board voted to approve the Commuter Shuttle Program. The vote allows the SFMTA to continue regulating operations of commuter shuttles in San Francisco and charging a per-stop fee beyond March 31, 2017, when the Program was set to expire.

There are 15 shuttle service providers with Commuter Shuttle permits:

There are 99 zones in the shuttle network: 52 are shared Muni-commuter shuttle zones, 41 are permitted commuter shuttles-only white zones, 6 are peak extension zones. The Program allows up to 125 zones in the city, and the SFMTA frequently makes changes to the stop network to address operational problems.

Commuter shuttle permit terms and conditions include but are not limited to:

Permitted shuttles make about 1,503 stop events per day (as of Oct, 2021) at zones in San Francisco’s shuttle network.

There is a detail of SFMTA Parking Control Officers who are specifically focused on Commuter Shuttle Program enforcement. The most common citations issued include double parking, Muni zone violations and idling. In addition, the SFMTA issues penalties to operators when their vehicles are detected traveling on non-arterial or restricted streets in violation of permit terms. 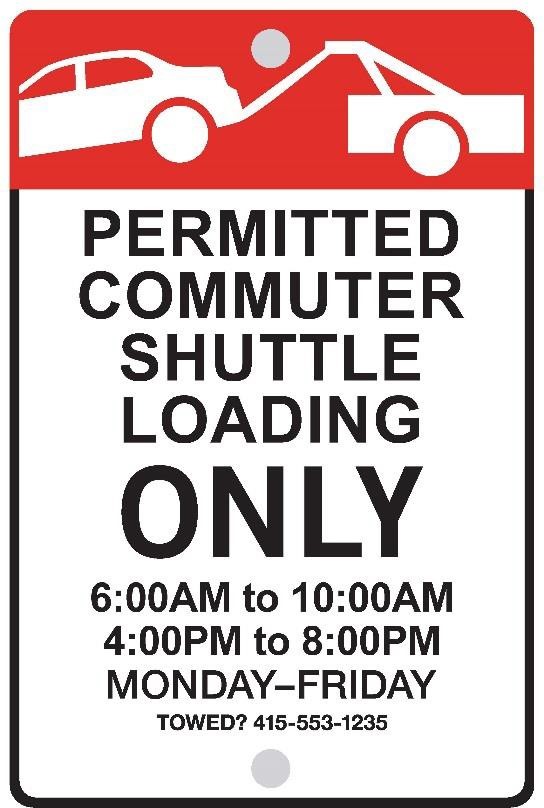 Residents can alert the SFMTA to shuttle bus issues via 311. In addition to calling 311, there is also a webform for sending shuttle bus concerns. SFMTA staff follows up on complaints by contacting individual shuttle operators and alerting our enforcement team. Please let us know if you see:

Buses (casino, tour, school bus, and shuttle) are under the California Public Utilities Commission (CPUC) authorization and are able to operate in San Francisco pursuant to the (California Vehicle Code (CVC) and the San Francisco Transportation Code. Only commuter shuttles that have SFMTA approved placard are regulated by SFMTA. 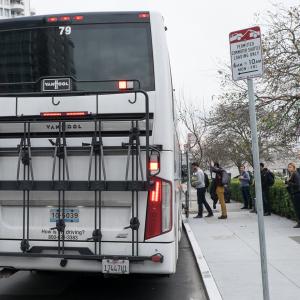