The Streets Division of the San Francisco Municipal Transportation Agency will hold a virtual public hearing starting on Friday, June 10, 2022 at 9:30 AM through Wednesday, June 22, 2022 at 11:30 PM to consider the items listed on the agenda below.

The event is virtual and can be accessed via the project webpage at SFMTA.com/GoldenGateSlowStreet. The purpose of the public hearing will be to get public feedback on these proposals. No decisions will be made on these items during the public hearing. Based on all public feedback received, the SFMTA will make and post the decision on these items by 5.pm. two weeks after the Engineering Public Hearing concludes on the project webpage.

The following items have been environmentally cleared by the Planning Department on July 21, 2021, (Case 2021-007227ENV): Golden Gate Avenue, between Masonic Avenue and Broderick Street – Slow Street

1. ESTABLISH – DO NOT ENTER, EXCEPT BICYCLES
Golden Gate Avenue, eastbound, at Masonic Avenue

Items denoted with an asterisk (*) can be approved by the City Traffic Engineer after the public hearing and such approval constitutes the CEQA Approval Action under S.F. Administrative Code Section 31.04(h). Otherwise, the SFMTA Board will make the final approval at a later date based on the outcome at the public hearing.

California Environmental Quality Act (CEQA) Appeal Rights under Chapter 31 of the San Francisco Administrative Code: For Approval Actions, the Planning Department has issued a CEQA exemption determination or negative declaration, which may be viewed online at http://www.sf-planning.org/index.aspx?page=3447. Following approval of the item by the SFMTA City Traffic Engineer, the CEQA determination is subject to appeal within the time frame specified in S.F. Administrative Code Section 31.16, typically within 30 calendar days of the Approval Action. For information on filing a CEQA appeal, contact the Clerk of the Board of Supervisors at City Hall, 1 Dr. Carlton B. Goodlett Place, Room 244, San Francisco, CA 94102, or call 415.554.5184. Under CEQA, in a later court challenge, a litigant may be limited to raising only those issues previously raised at a hearing on the project or in written correspondence delivered to the Board of Supervisors or other City board, commission or department at, or prior to, such hearing, or as part of the appeal hearing process on the CEQA decision.

A copy of this hearing notice can be obtained at http://www.sfmta.com/calendar. Opinions on these proposed changes may be filed in writing prior to the hearing with SFMTA Transportation Engineering, 1 South Van Ness Avenue, 7th Floor, San Francisco, CA 94103-5417. Written opinions may also be transmitted by fax to 415.701.4737 or by email to sustainable.streets@sfmta.com with subject line “Public Hearing.” Submitted opinions will become part of the official public record and will be brought to the attention of the person(s) conducting the hearing. Information on the proposed changes may be obtained from SFMTA Transportation Engineering at the above-referenced addresses or by telephone at 415.701.4615. 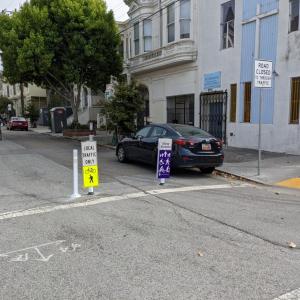