Happy Holidays from the SFMTA! The Central Embarcadero project team has an update to share on the implementation of the quick-build project and plans for evaluation.

You may have already seen some early changes being made near The Embarcadero to make way for the bikeway installation starting in January. 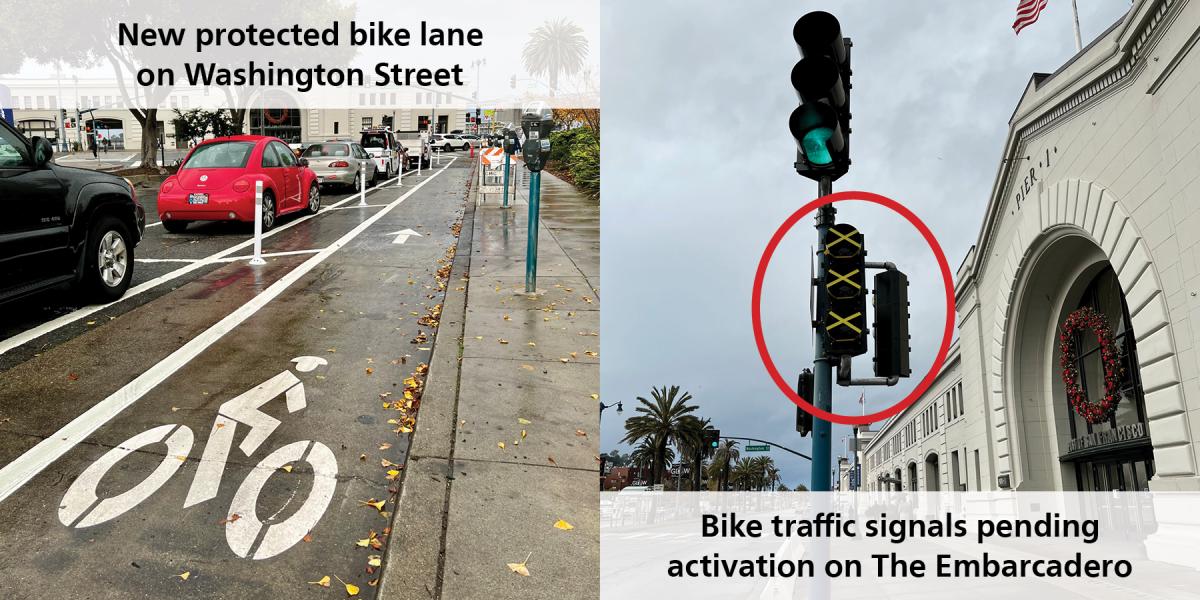 Work to install the two-way bikeway on northbound Embarcadero (water side) will begin after the holidays in coordination with the Ferry Building and farmers' market. We expect implementation to be ongoing through the end of January.

Additional changes, including adding safety signs on the promenade and bike/scooter parking changes, will follow in the months to come.

What to expect during implementation

The quick-build project will be quickly implemented and involve changes to roadway striping, signs, signal timing, and curb management. Lane closures are necessary to ensure worker safety and will result in limited traffic delays. Crews will strive to work outside busy periods, but it's not always possible. We thank you for your patience.

Ambassadors and signage will be in place as the roadway and bikeway changes take effect to help people use the new facilities.

The project team collected new pre-project traffic counts in fall 2021. Traffic is still depressed compared with pre-pandemic conditions, but this data will serve as a baseline to observe how travel patterns evolve. The team is still digging into the details of the activity on The Embarcadero's promenade. Additional data collection is planned for after implementation once folks have had a chance to adjust to the changes.

We will provide a status update to the Port Commission in spring 2022. We are also forming a stakeholder advisory group to monitor the quick-build changes and inform the next steps for the larger Embarcadero Enhancement Program.

Please get in touch with the project team at Embarcadero@sfmta.com with any questions or concerns. We look forward to expanding the protected bikeway and adding pedestrian safety measures to the waterfront in the New Year!