The work that was previously stated to begin the week of July 27 will begin on Monday, August 17th, and last for the duration of approximately one week. General work hours will be from 8 a.m. to 5 p.m.

During construction, crews will be adding new paint to the road and curbs, removing and installing metered parking, and installing pedestrian/bicycle waiting areas and protected bikeways.

Please look out for field staff and temporary signage and exercise care when using the street.

General metered parking will be bagged for removal on the waterside of The Embarcadero between Harrison and Mission streets in preparation for construction of the Rincon Restaurant Zone and Ferry Terminal Quick-Build Projects.

Road markings for the northbound protected bikeway, plastic posts, and extended passenger loading zone will be installed on northbound The Embarcadero between starting the week of August 17. The installation of meters for motorcycle parking is expected to be installed in September.

Road markings for the protected bikeway, plastic posts, and turn boxes will be installed on northbound The Embarcadero between Mission to Folsom streets starting the week of August 17. Five general parking meters are planned for installation on the block of southbound The Embarcadero between Mission and Howard streets. Concrete islands and railings to protect the two-way bikeway and bike signals at Howard Street are planned for installation in September.

NOTE: The Folsom-Mission protected bikeway will be northbound only until concrete islands are installed.

We will send another update when we have more detailed information about the construction dates for the concrete islands, railings, signals and the Pier 35 Quick Build.

Thank you for your patience and consideration as we work to bring these vital safety improvements to The Embarcadero corridor. 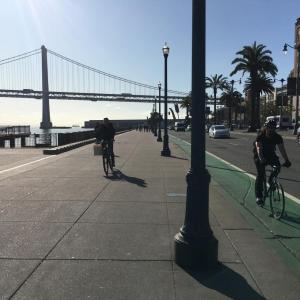