Skip to main content
HeadsUp: Real-time monitoring of this account will be limited for the remainder of today (6/28) beginning at 1 PM. https://t.co/db0UV4RCoJ (More: 12 in last 48 hours)
Subscribe

The Safer Taylor Street Project is happy to announce a “quick build” to rapidly bring traffic safety improvements to protect vulnerable road users, including people walking, seniors, children, and people with disabilities, on one of the Tenderloin’s most important streets. This summer, the following improvements will be made in advance of the larger streetscape project and bring us closer to meeting the City’s Vision Zero commitment to eliminate all traffic related fatalities and severe injuries:

The Safer Taylor Team has considered several “quick build” street configuration ideas (shown here) and is honing in on a design that will prioritize traffic safety, speed of installation, and street cleaning operations. SFMTA will install these changes beginning Summer 2019.

Meanwhile, the detailed design process led by our partners at Public Works is ongoing. Public Works engineers and designers are evaluating the feasibility of the approved sidewalk widening of Taylor Street, which would unlock opportunities for landscaping, lighting, and other livability enhancements. More on this to come!

Jun
28
Cancelled - Policy and Governance Committee meeting, June 28, 2022 POLICY AND GOVERNANCE COMMITTEE The SFMTA Policy and Governance Committee...
Jun
28
San Francisco County Transportation Authority Board Transportation Authority Board June 28, 2022 at 10:00 AM Legislative Chamber, Room 250, City Hall...
Jun
28
Board of Directors special meeting, June 28, 2022 This meeting will be held in person at the location listed above. As authorized by California... 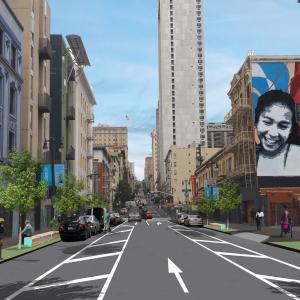