The SFMTA's Vision Zero Proactive Traffic Calming Program focuses on safety improvements on streets where pedestrian injuries to seniors and people with disabilities are concentrated, and in priority areas where seniors and people with disabilities live and travel by implementing measures designed to reduce instances of speeding vehicles along residential streets. These priority areas and corridors were developed through analysis by the San Francisco's Vision Zero SF Injury Prevention Research (VZIPR) Collaborative, spearheaded by SFDPH. The Visitacion Valley and Portola Proactive Traffic Calming Project will focus on the design and construction phases for speed humps and other low-cost traffic calming measures in these neighborhoods and at locations identified through the SFDPH planning process.

This traffic calming effort will use a proactive approach to prioritize locations in the Visitacion Valley and Portola neighborhoods where seniors and people with disabilities are more at risk for a severe injury or fatality resulting from a traffic collision. The Vision Zero Proactive Traffic Calming countermeasure toolbox is consistent with the Residential Application-Based Traffic Calming toolbox, with tools proven effective at reducing traffic speeds below the speed limit and significantly reducing the incidence of egregious speeding, which is defined as vehicles traveling over 30 mph on 25 mph speed limit streets.

Speed Humps and Speed Tables
Speed humps and speed tables (slightly expanded speed humps) are the default device used as part of the Traffic Calming Program to meet the program’s goals of reducing mid-block vehicular speeding. The devices are relatively inexpensive, simple to construct, and do not require any tradeoffs such as parking removal. Most importantly, speed humps and speed tables are the most effective traffic calming device in reducing vehicular speeds on residential streets.

Speed Cushions
Speed cushions are speed humps that include wheel cutouts to allow large vehicles, such as Muni buses and emergency response vehicles, to pass unaffected, while reducing passenger vehicle speeds. Speed cushions can either be a 5-lump design, allowing for a set of slots in each direction of travel, or a 3-lump design, with a single set of slots down the center of the street.

Raised Crosswalks
Raised Crosswalks are speed tables striped with crosswalk markings and signage to channelize pedestrian crossings, providing pedestrians with a level street crossing. Also, by raising the level of the crossing, pedestrians are more visible to approaching motorists.

The Visitacion Valley and Portola Proactive Traffic Calming Project will identify geographic locations for speed humps and other low-cost traffic calming measures identified through the SFDPH planning process. The project team will further confirm the locations with the community and the District 9 and 10 supervisor offices before legislation and construction. 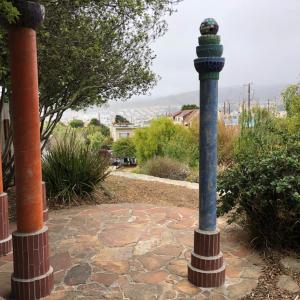