Our weekly historical series featuring Muni routes finishes up with the 22 Fillmore, a hard working line that has provided crosstown service for over a century.

Also, don’t forget to join us at “SF History Days” at the Old Mint this Saturday and Sunday. 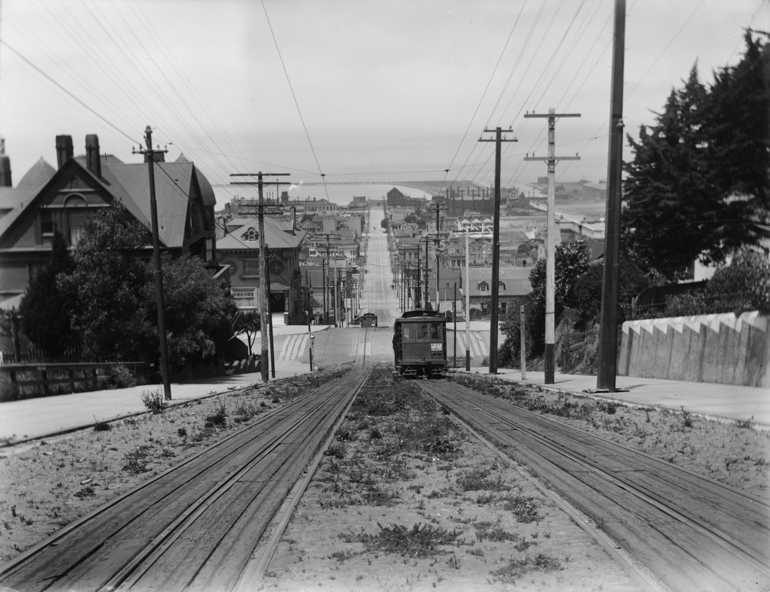 The first electric streetcar line on Fillmore Street opened in July 1895 and covered a portion of the modern-day 22 route from 16th and Folsom streets to Fillmore and Broadway. It was later expanded north to Bay Street and to the southeast over Potrero Hill to 18th and Kentucky streets (present day 3rd Street).

To climb the steep grade over Pacific Heights, the Fillmore Line incorporated a type of funicular- a unique mechanical solution that was not used on any other line in hilly San Francisco. Nineteenth century engineers combined cable and streetcar technology by using a counterbalance cable system to haul small electric streetcars between Green and Broadway. 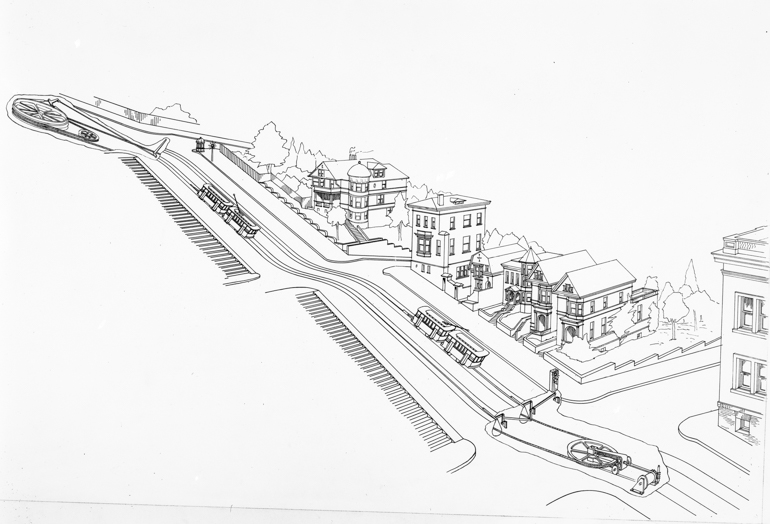 The above copy drawing illustrates the inner workings of the system. Unlike conventional cable car systems which use a motor-driven cable and "grips” inside the cars, the Fillmore Hill cars were helped by the force of gravity to climb the hill using an external hook connected to an underground cable on a pulley. As a northbound car descended from the top of the hill at Broadway (top left in the drawing), it pulled the southbound car motoring uphill from Green Street (bottom right). 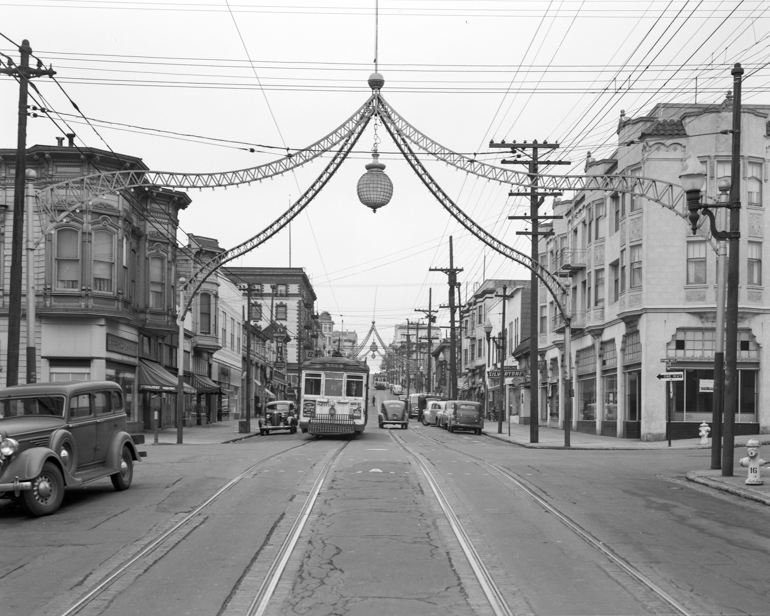 This photo shows the 22 Fillmore in its heyday when more people were taking public transit than ever before. Streetcars rolled underneath decorative ironwork arches that adorned intersections in the neighborhood known today as “The Fillmore.” These arches were scrapped in World War II for the war effort but the 22 carried on, providing crucial transit service for workers laboring in the shipyards and steel mills of the Dogpatch area. 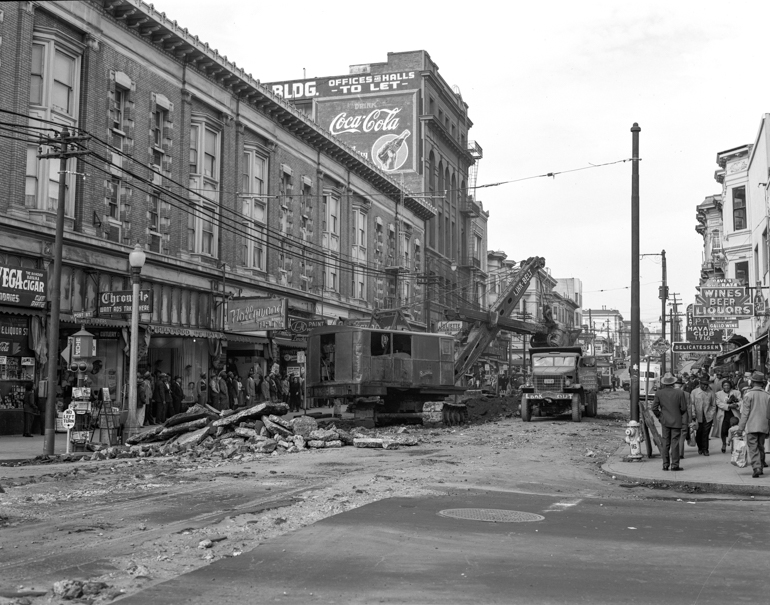 In 1941, the counterbalance cars were replaced with shuttle buses, marking the end of the line for a unique piece of transit history. Like many other rail lines in the city, the 22 was converted to trolley bus service in 1948. The photo above shows crowds watching a massive motorized shovel tear out the rails. 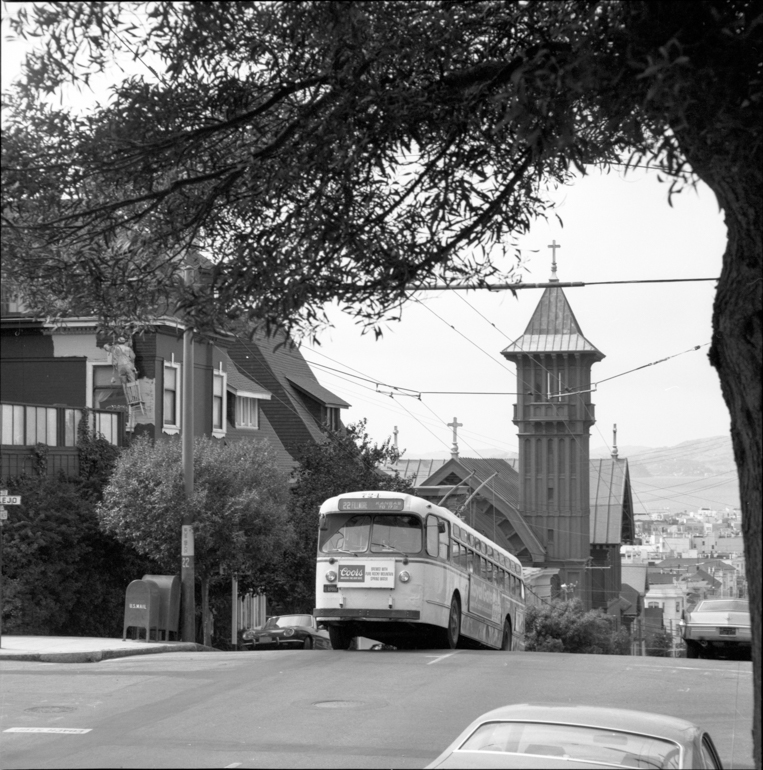 The 22 hasn’t seen major changes since then, and trolley buses mostly follow the same route that the very first streetcars did.

But some 120 years after starting service, the route is on the verge of a new era with the 22 Fillmore Transit Priority Project. It’s part of the SFMTA's Muni Forward initiative to make the route faster and more reliable with improvements on 16th Street.

Check out more great images from the SFMTA Photo Archive at the free SF History Days event this weekend, March 5 and 6, at the Old Mint. We'll be joined by a gaggle of other local history and neighborhood organizations to showcase the history of our great city. You can also get your historical photo fix by following us on Flickr, Twitter, HistoryPin and Instagram.