Skip to main content
ATTN: Due to staff scheduling, real-time monitoring will begin at noon today. We apologize for any inconvenience. (More: 11 in last 48 hours)
Subscribe
History in Motion

To celebrate today's Bike to Work Day, the SFMTA Photo Archive is going way back for a look at the early days of biking in SF. In the 1890s, bicycles were rapidly growing in popularity as a way to get around town quickly, easily, and cheaply. 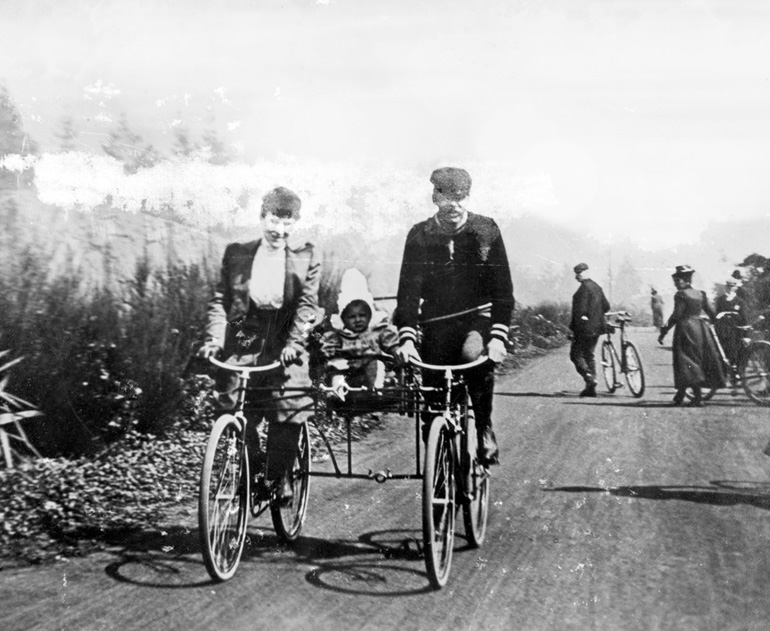 A family on conjoined bicycles, with a child seat in the middle, enjoys an outing in Golden Gate Park around the turn of the 20th century. Note that this image is a copy of a long-lost original photograph and shows some damage across the center.

At the end of the 19th century, cable car lines, which stretched across San Francisco, were the main mode of public transit. Some of these lines ended at Golden Gate Park, a popular destination for leisurely outings like a bike ride. Bicycling was becoming so popular that several cable car lines allowed riders to bring their bicycle on the cable car for an additional fare. Many riders took advantage of this easy way to get them and their bikes to the park, even with the extra cost.

Despite its popularity, the perk of bringing a bicycle onto a cable car only lasted for a few years because cable cars at the time were not equipped with bike racks like today's buses. Instead, cyclists had to squeeze their bikes on the open-air portion of the cable car, creating problems even on cable cars with lots of side-access transverse seating.

Over a century later, San Francisco is seeing another biking bonanza, with more than one million trips logged on the Market Street bike counter in 2015. So, happy Bike to Work Day and keep pushing those pedals!

Many thanks to San Francisco transit historian Emiliano Echeverría, author of San Francisco’s Transportation Octopus: The Market Street Railway of 1893, for cluing us in to the history of bicycles on cable cars in the 1890s.

To see more images of San Francisco transportation history, check out the SFMTA Photo Archive on Twitter and Instagram.