Biking in SF: Then and Now

In celebration of Bike to Work Day, let's take a glimpse into the past and present of biking in San Francisco. As these two photos demonstrate, biking conditions in San Francisco have improved dramatically in the last 50 years. 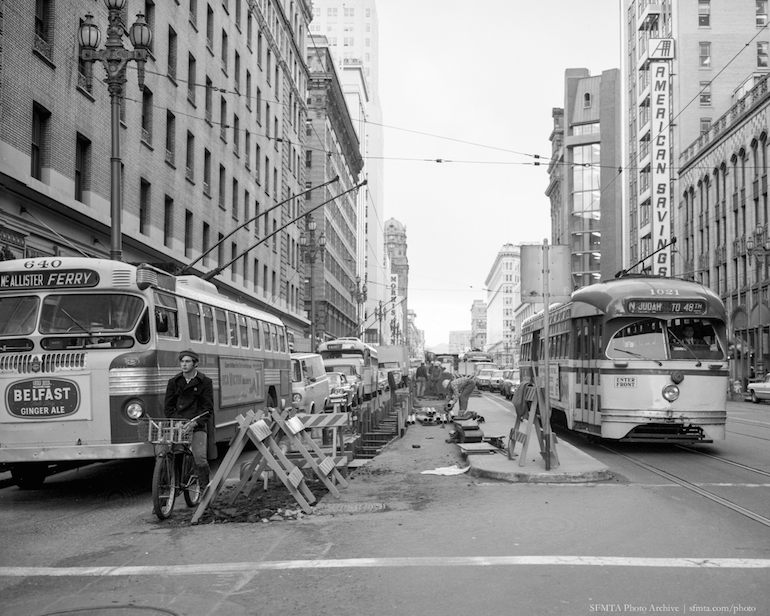 This shot, taken on Market and Montgomery in 1966 shows a lone cyclist waiting at a stop light amidst a crowded hazard zone of cars, buses and construction. While it's arguable that the cyclist here could have chosen a different route to bike, instead of battling it out in this construction area, in 1966 our streets had almost no infrastructure to provide a safer route, with or without construction. In this era, street design was heavily auto-focused. Roads were built to carry cars with no thought to accommodating people using other modes, including bicycles.

Almost 50 years later, we see a major shift in attitudes, design and structure that make for a far safer, more inviting space for biking. Improving roadways to encourage bike riding is a growing national trend and San Francisco has always been a strong leader in making streets safer for cycling. 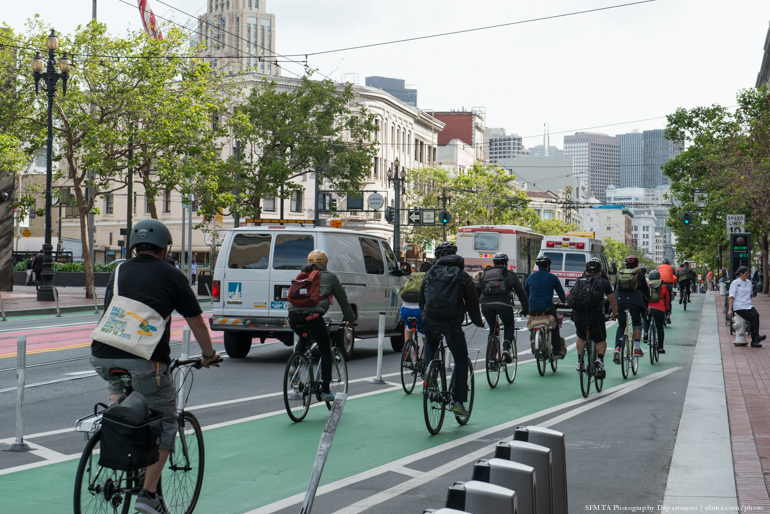 Taken on Market and 10th, this shot shows a cyclist passing the "Bike Counter," in one of our many green-backed bike lanes. This lane and the hundreds of miles of bike facilities like it are far friendlier to people on two wheels than the streets of 1966, and we have seen a massive increase in biking as a result.

Through a combination of physical changes to the roadway, adjustments to traffic patterns and increased awareness of biking, safe cycling is now an everyday reality for San Franciscans. Our city boasts one of the most extensive bike networks and some of the highest ridership numbers nationwide.

So oil up that chain, pump up those tires, grab a helmet and join thousands of your neighbors pushing those pedals to get to (and from) work today! And as always, remember to follow all traffic laws and be a shining example of a safe and courteous cyclist to your fellow road users.