A Bridge to Nowhere

The Mission Bay area is one part of town that has been changing rapidly in the past five-plus years, erasing its own history in the process.  Originally, Mission Bay was, you guessed it, a bay created by the confluence of Mission Creek and the San Francisco Bay but it now retains almost nothing from its watery past.  Early in the 20th Century, the area became part of the City's industrial heart; filled with rail yards, manufacturing, and warehouses.  Now, in the early 21st century, it is transitioning into a something altogether different; marked with high-rise condos, sprawling parking lots, and massive medical and tech-sector campuses.

One element of this area that has stayed nearly the same for the past 148 years is the Fourth Street Bridge, which has been in existence since construction was completed on the very first span in 1867.  The original span, called Long Bridge, was more like a causeway across the open waters of the Bay; built as a private toll road to connect the industrial South of Market Area to the heavy industry along the southeastern edge of the City.  While Long Bridge is long gone, replaced with landfill and asphalt, the drawbridge portion across Mission Creek remains in place to this day, albeit not in its original form.  Read more on the history of Long Bridge on the FoundSF site.

Today's photo shows workers rebuilding the southern approach to the bridge in 1909, removing rotted planks and worn streetcar tracks.  Those massive wood pilings seen just below street level are likely remnants of the original 1867 bridge, huge redwood beams hauled in and sunk into the mud of the Bay to support the structure.  Taken just three years after the remainder of Mission Bay was filled in with rubble from the 1906 'quake, the area looks like a vast muddy expanse with a smattering of rail and industrial activity. 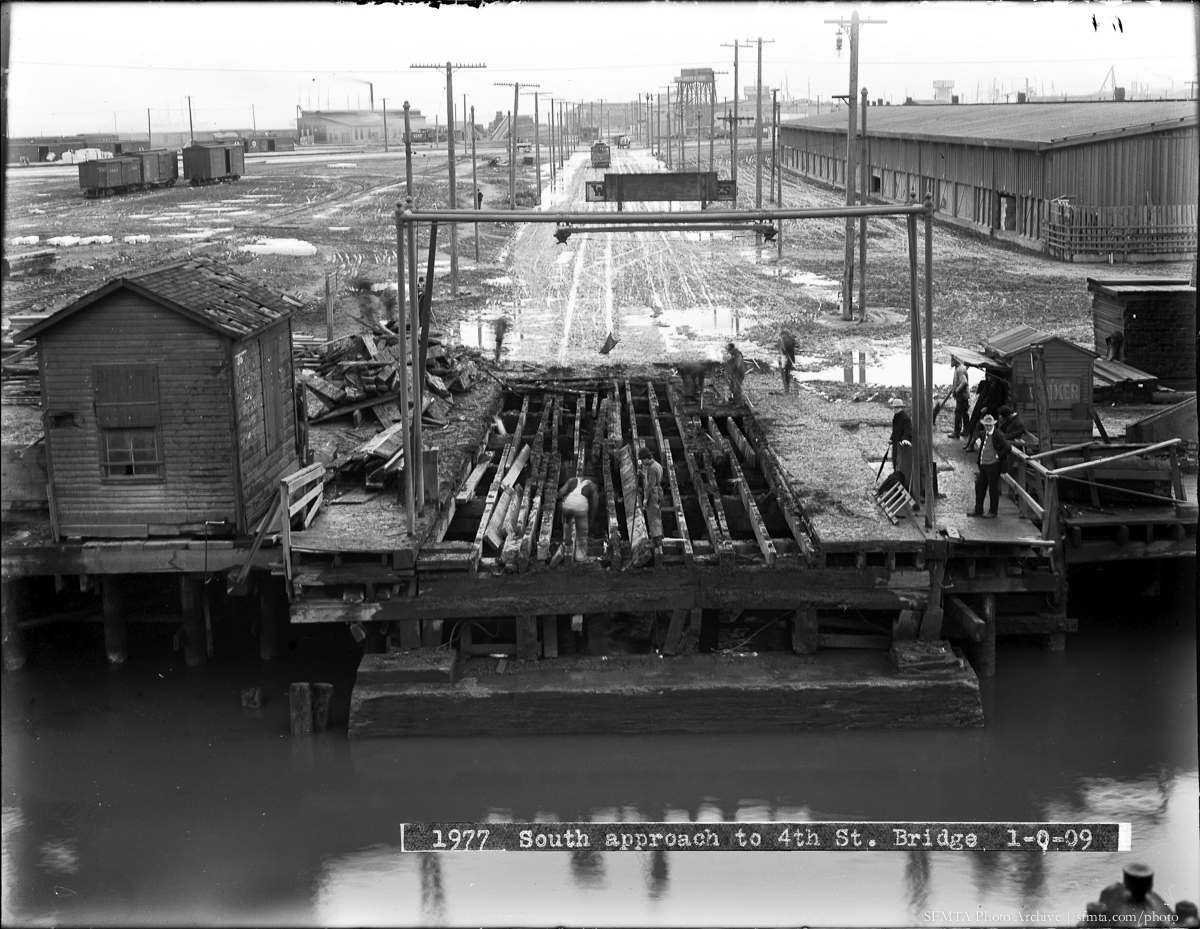 The bridge we have today was built in 1917, just one more chapter in this important span's lifetime.  Since its creation, this crossing has served as a vital North-South connection, carrying streetcars down Kentucky (3rd) Street along the waterfront on the 16 and 29 lines and now carrying the KT-Third's light rail trains and auto traffic.

Even as our City undergoes some major changes, important infrastructure elements like the Fourth Street Bridge will remain, rooted in the past but evergreen in their usefulness in the present.  So next time you're on the T, rolling across the heavy steel drawbridge, just imagine yourself bumping along in a horse-drawn cart on a long-lost plank road, surrounded by the waters of Mission Creek and Mission Bay.