As part of the 19th Avenue Combined City Project, the SFMTA will implement transit priority and safety improvements for people walking along the route of the 28 19th Avenue. The improvements will make it safer to walk, remove stops to make transit service more reliable, and enhance customers’ experiences—on and off the bus.

As part of the project, seven Muni stops were removed between Irving Street and Ocean Avenue on the 28 19th Avenue bus line to improve transit reliability. Removing closely spaced stops will help to reduce delays for the 28 19th Avenue line while preserving bus stops within a block of each removal to minimize impacts to people with limited mobility. Please visit our Travel & Transit Updates page for more details about these stop changes, which took effect on October 17.

The project includes transit bulbs that allow Muni vehicles to stop for passengers without having to pull out of traffic. It will also widen the sidewalk at corners by installing pedestrian bulbs along 19th Avenue and modify traffic and pedestrian signals to give people who walk more time to cross the street.

The SFMTA Board approved the project, including these stop changes, after community engagement and feedback in 2015. 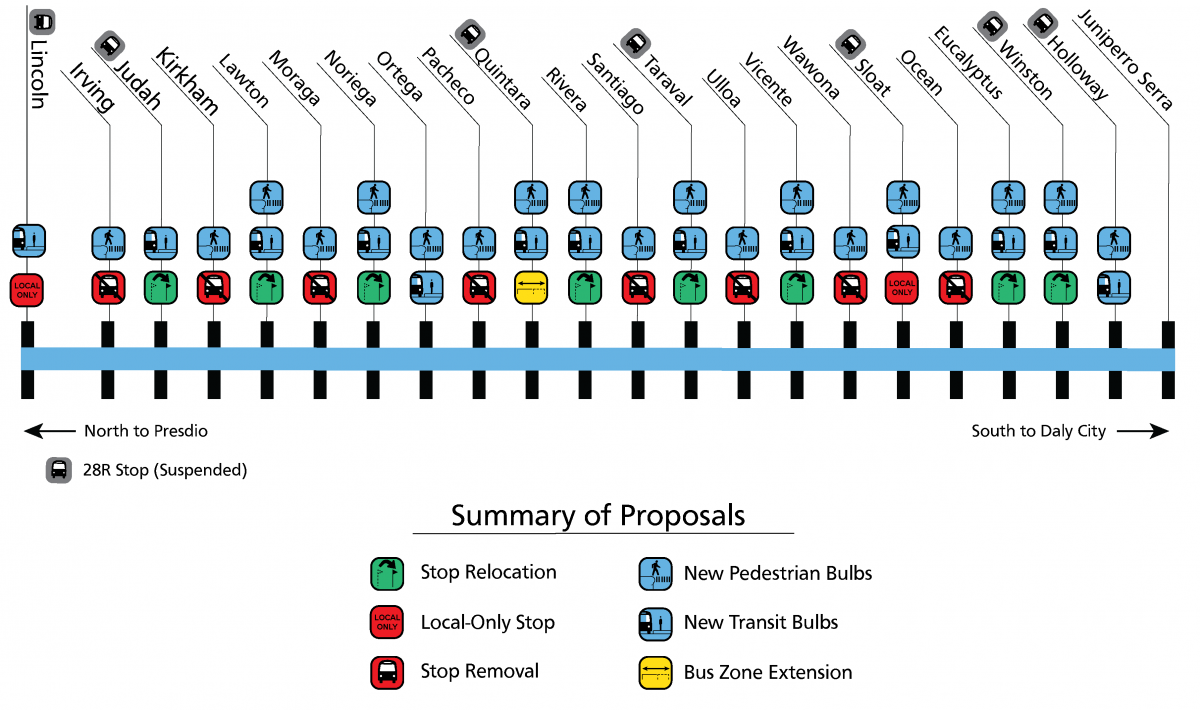 Diagram of 28th the 19th Avenue Rapid Project improvements (note: stop removal on 19th at Irving is still under review)

The transit improvements are just one part of the combined project that will also include water main and sewer replacement and rehabilitation and Auxiliary Water Supply Service for emergency fire fighting. This project will be followed by Caltrans repaving of 19th Avenue from Holloway Avenue to Lincoln Way.

San Francisco Public Works will lead construction, beginning in Fall 2020 and be completed in 2023. Project work will be completed in four segments to minimize construction impacts during its 27-month duration. The first construction segment from Lincoln Way to Noriega Street on 19th Avenue is anticipated to begin in November.

In preparation for stop changes this month, project staff has mailed over 10,000 postcards to residents near the project area, posted multilingual signs at every intersection, and briefed district supervisors for District Three, Four and Seven. Transit Information Program (TIP) staff along 19th Avenue were present during the first six days of these stop changes taking effect to help customers find alternative stops, provide project information and answer questions. 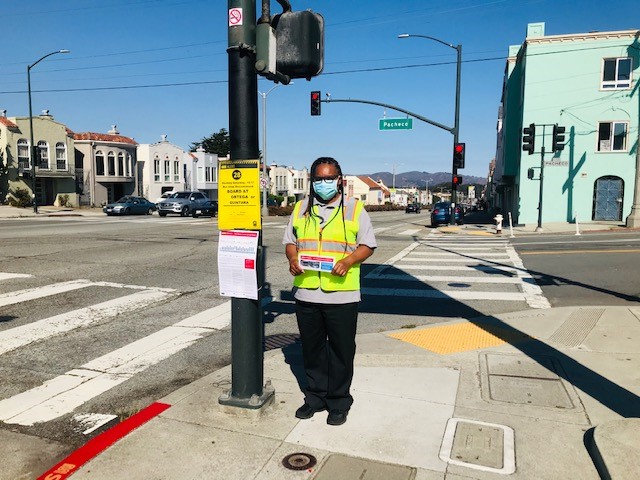 Find additional information about the transit reliability and pedestrian safety components on the project page. For the overall project information, please visit sfpublicworks.org/19th-Avenue.