With San Francisco’s growing economy and expanding population, it's no wonder drivers and transit riders can be slowed by congestion on their commutes. Keeping San Franciscans moving in our city is what the city’s transit-first policy is designed to do.

Decisions regarding the use of limited public street and sidewalk space shall encourage the use of public rights of way by pedestrians, bicyclists, and public transit, and shall strive to reduce traffic and improve public health and safety.

When the Board of Supervisors adopted San Francisco’s original transit-first policy on March 19th, 1973 they could see the looming consequences of not taking action -- more traffic congestion and air pollution. Giving priority to buses and light rail trains, which use less road space per passenger than private cars, keeps people moving while reducing greenhouse gas emissions.

Over the next decade San Francisco implemented the transit-first policy with improvements like new transit-only lanes, a rebuilt Market Street that prioritizes transit and pedestrians, and the opening of Muni Metro service. While much of the rest of the nation continued with a car-centric approach to planning, San Francisco had a renewed focus on public transportation.

Voters have repeatedly reaffirmed their support for transit-first goals in 1999, 2007 and 2014 and have authorized additional funding for Muni to make more improvements.

As part of the Muni Forward program, improvements include major initiatives like Muni’s new Rapid Network, which reduces wait times on its most heavily used routes that carry nearly 70 percent of customers. We’ve seen ridership increase on the Rapid Network by 18 percent in the past two years as a result of the transit-first measures on these lines.

More Muni Forward improvements that prioritize transit are on the way on 40 miles of city streets and include more transit-only lanes, new traffic signals that keep the light green for Muni and consolidation of some closely spaced bus stops to reduce delays and improve reliability.

Muni is also replacing and expanding its fleet of buses, paratransit vans and light rail vehicles and will go from having the oldest fleet in the nation to the newest -- and one of the greenest -- by 2019. And Muni’s Equity Strategy works to ensure that all San Francisco’s neighborhoods get the transit service residents need and that improvements benefit the riders who depend on transit the most.

And after 45 years, our transit-first policy is moving more people in San Francisco more efficiently than ever before:

And our customers are noticing, too: Customer satisfaction with Muni is at an all-time high of 70 percent over the last two years.

Sign up for alerts by email or text about current Muni Forward initiatives and stay updated as transit first rolls into its 45th year. 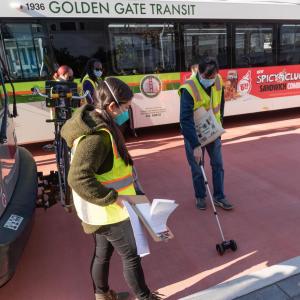