Just two weeks ago we announced the launch of another round of Muni service improvements aimed at reducing crowding and providing new connections across the city. Unlike the improvements we launched in January and April, the September changes will also include tweaks to the routing of several Muni lines.

Redesigning these eight routes allows Muni to adjust to the growing population and meet travel demands across the city, while also providing new service to new destinations and major transit hubs. We know that these new routes may change up your commute a bit, and that may take some getting used to. To be sure you have all the details before the September 26 changes, let’s start with a closer look at the new routes for lines serving the southwest part of the city: the 7X Noriega Express, 18 46th Avenue, 57 Parkmerced and 29 Sunset. 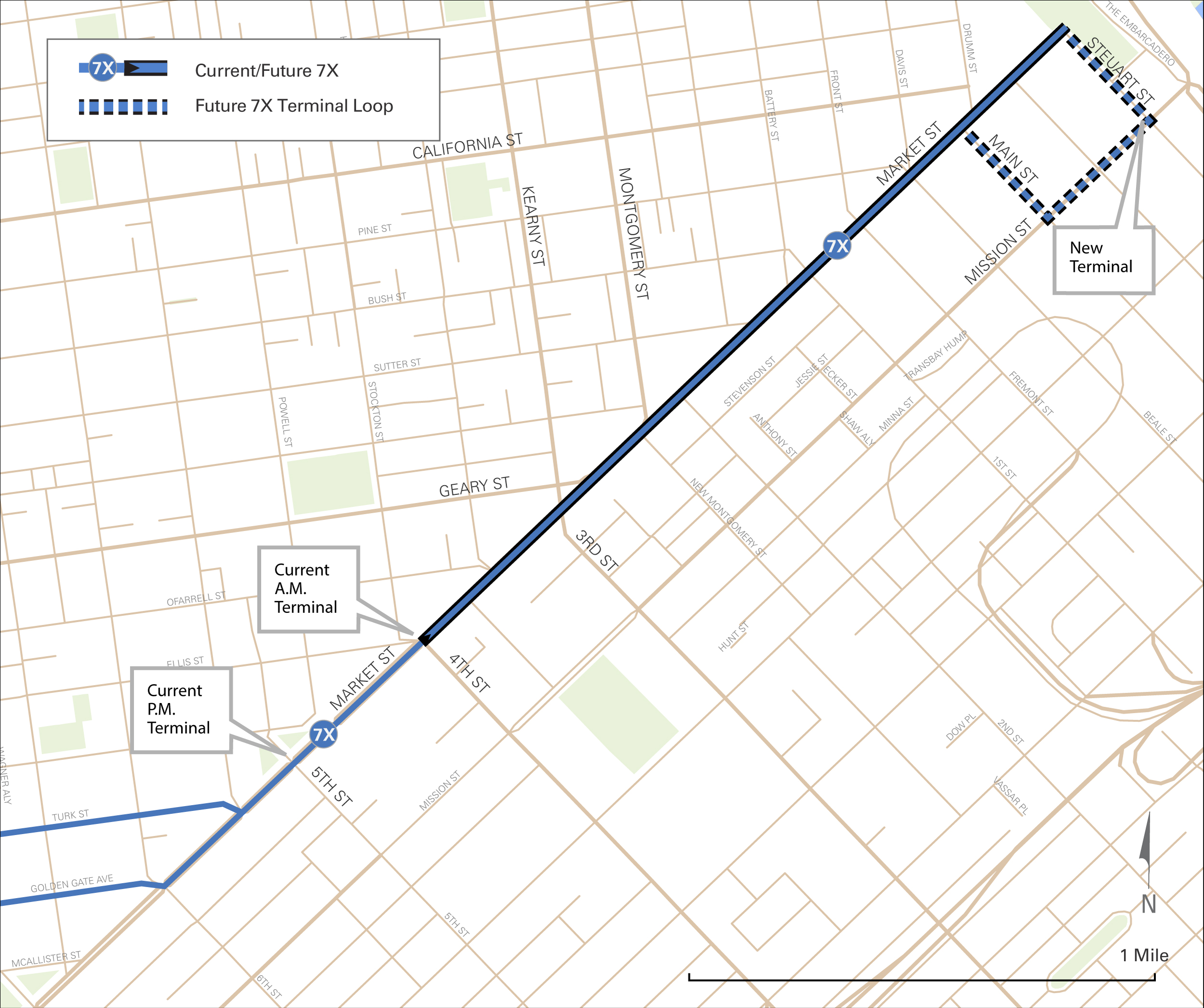 Hey Sunset residents — if you commute to the Financial District, consider taking the 7X Noriega Express! This route used to end its morning trip at 4th and Market streets, meaning 7X customers couldn’t get downtown without switching to another bus, train or mode of transportation. But starting Monday, September 27, the 7X will serve local stops along Market all the way to Steuart.

Here’s a list of the new 7X stops along Market: 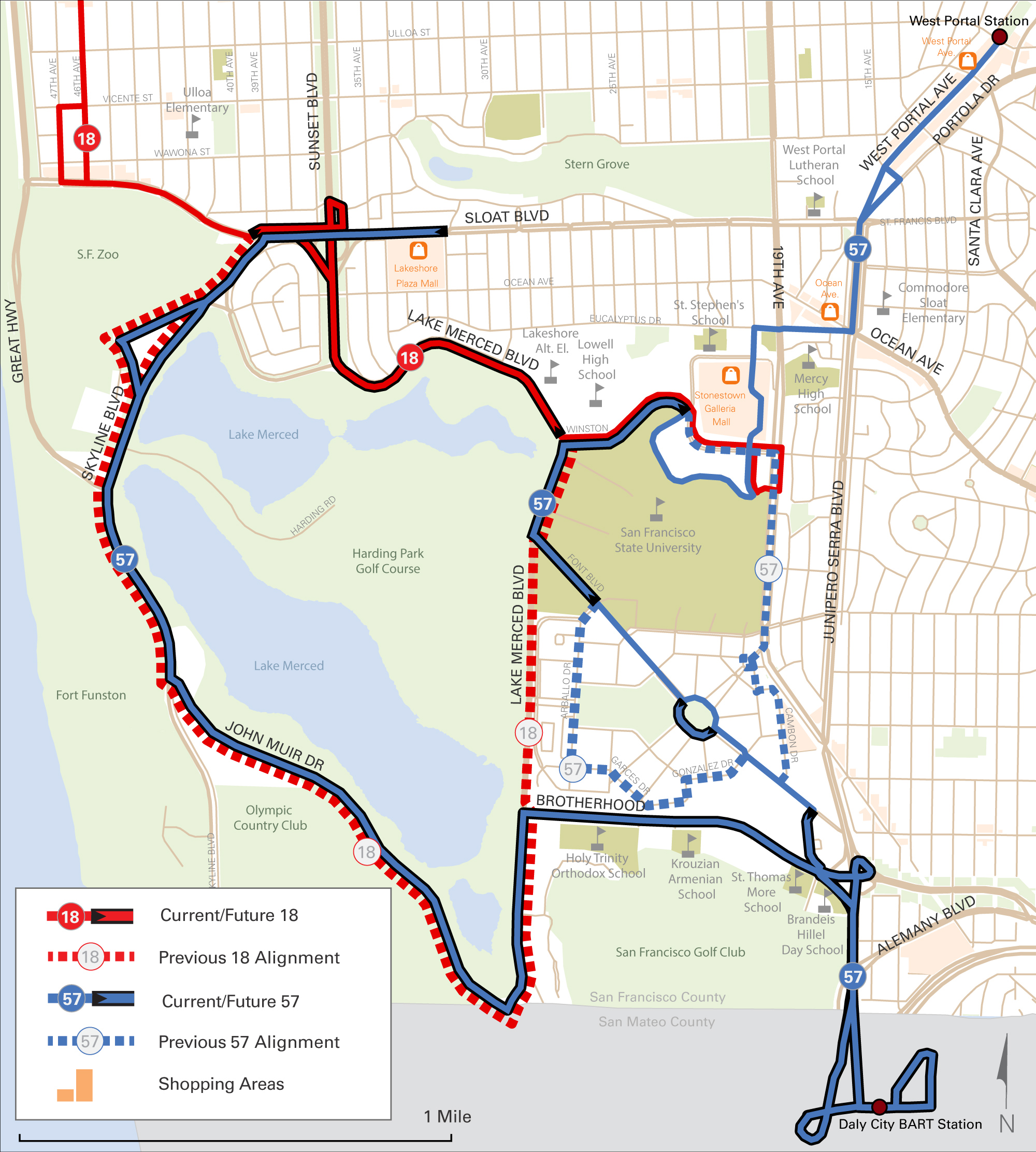 Although they’re two separate routes, the 18 46th Avenue and 57 Parkmerced reroutes are designed to work together to provide new connections for Parkmerced residents and streamlined service for riders on the 18.

This includes the 57 taking over the current 18 route around Lake Merced, while connecting West Portal Station and Stonestown to Daly City BART, and Lakeshore Plaza. New stops along Brotherhood Way will also provide new service to several schools and religious institutions. If you take the 57 from Arballo, Garces and Gonzales drives, you’ll need to board on Font Boulevard. If you board south of SF State along 19th Avenue, you’re likely to prefer taking the 28/28R 19th Avenue. Frequency on the 57 will also increase from every 30 minutes to every 20 minutes.

Here’s a list of the stops for the 57 Parkmerced:

With the 57 taking over the loop around Lake Merced, the 18 will be streamlined to provide a more direct connection to Stonestown, San Francisco State University, 19th Avenue and the M Line. Heading east on Sloat, the route will bypass the Lake Merced loop, traveling instead along Sunset Avenue and Lake Merced Boulevard, where it will pick up its original route at Winston Drive. We’ll also be increasing the weekend frequency on the 18, from every 25 minutes to every 20 minutes.

The 29 Sunset carries more than 20,000 customers each day, so we’re realigning the route to speed up the trip. The reroute is expected to shave more than three minutes off the trip in each direction.

Streamlining the route means the 29 will no longer serve stops on Mission Street or Geneva Avenue. Customers on Mission Street can take the 14 Mission to catch the 29 on Ocean Avenue, and Geneva Avenue residents can take the 43 Masonic or 8 Bayshore. The 29 will follow the same route as the 49 Van Ness/Mission on Ocean Avenue, making the same stops as well. A new stop will be established for the westbound 29 on the backside of Balboa Park Station at Ocean and I-280.

Here’s a list of the new stops for the 29 on Ocean, between Mission and Geneva: