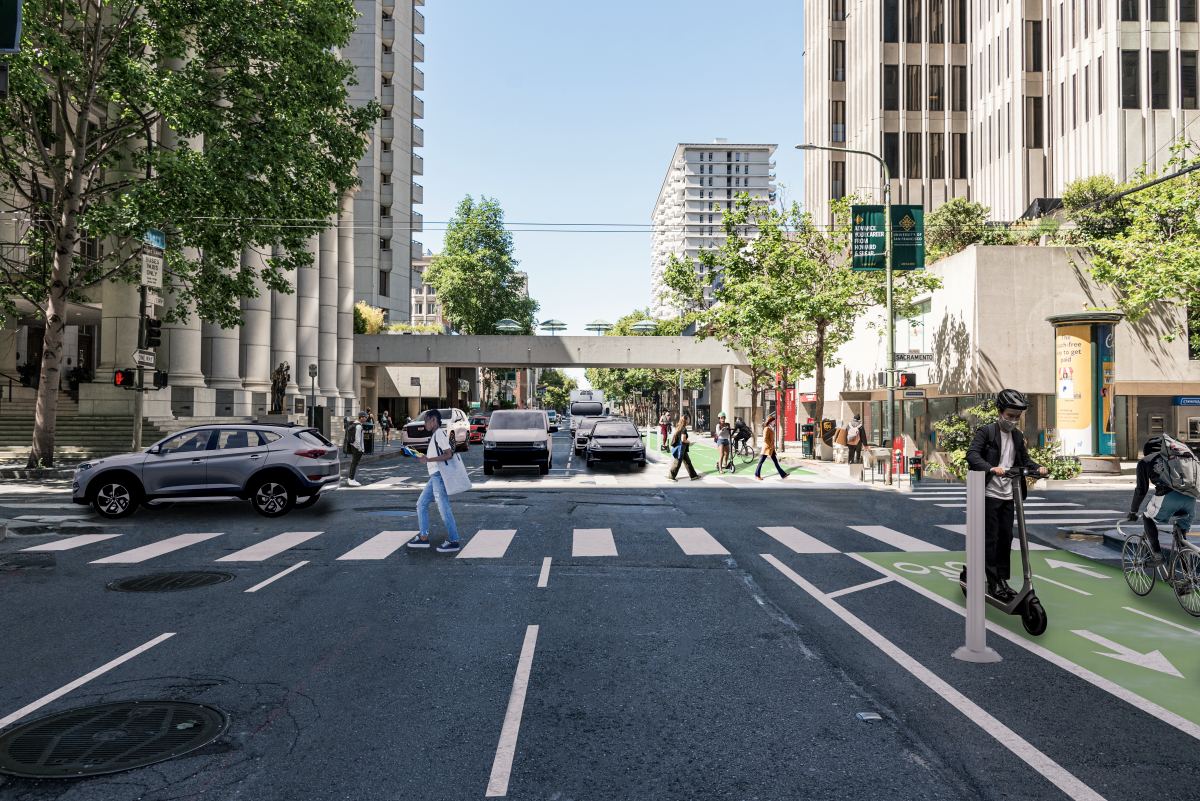 The first-ever protected bike lane in the Financial District is on its way in!

This week, SFMTA crews are starting work on the Battery/Sansome Quick-Build project. Approved by the SFMTA Board of Directors in September, this project will bring a two-way protected bike lane to Battery Street. The project will also add pedestrian safety improvements on both Battery and Sansome Streets, and some loading changes on Battery.

This project is a major step forward for cycling in the city. Apart from the Embarcadero, there is no other protected bike lane near the Financial District — even though two out of the 10 most active bike share stations in the city are in the downtown area. With so many people returning to downtown offices after working from home due to the pandemic, this new route will offer a safer option for those looking for a more active commute.

Over the past year, SFMTA staff have worked with neighborhood stakeholders to come up with a design that meets current needs and supports downtown San Francisco’s future. During the same time, the Downtown SF Partnership — the neighborhood’s nonprofit that supports local businesses — commissioned a plan to imagine how the neighborhood could evolve out of the pandemic. Downtown was hit especially hard by COVID-19 and has been slow to recover. The Downtown SF Public Action Realm Plan makes a number of recommendations for activating the neighborhood, from more greenery to improved public spaces. The plan also calls for creating better bike connections and a safer, more welcoming pedestrian experience throughout the neighborhood. The Battery/Sansome Quick-Build project was named in the plan as an essential part of transforming Downtown SF into a more welcoming space for all.

During our outreach, we heard a lot of enthusiasm for the idea of a two-way bike lane, which is now being built on Battery Street. But we also heard concerns that removing a vehicle travel lane could worsen congestion in the downtown area, especially during peak commute hours when people head toward the Bay Bridge. To address these concerns, the western side of the street will have commercial loading zones that local businesses will be able to use except for during peak hours, when the zones will need to be cleared. That way, the street will still have three functional vehicle travel lanes during rush hours. This solution was designed with the community to keep traffic flowing while creating a dedicated space for active travel.

Construction will likely take up to three weeks, and we appreciate your patience as these important street improvements are completed. By early next year, the Battery/Sansome Quick-Build will be open for use to explore all that Downtown SF has to offer. As you’re riding through, make sure you stop to admire the new mural at the Battery Bridge by Peruvian-born, SF-based painter Talavera-Ballón — and share what you think of the new bikeway with our team.