Skip to main content
ATTN: IB 29 blocked at Gilman and Hawes by #SFPD activity. IB 29 will reroute via Ingalls to Gilman. There will no https://t.co/VxyjRkga5v (More: 15 in last 48 hours)
Subscribe
Information Gladly Given

While most Californians welcomed the recent rain, the wild weather did put a damper on our San Francisco cable cars. Last Monday, we decided to not send the cable cars out on the street, but instead replaced them with shuttle buses. We didn’t purposely rain on your parade; this was a precautionary call made in the light of flash flood warnings and heavy rain—the kind of rain storm we hadn’t seen in quite a while.

Heavy rain can flush a lot of gunk on the street and into the track way and switches of the cable car lines. Removing this “gunk” is a crucial task that can’t always be maintained in the middle of a storm. For instance, cable car track crews sweep sections of the channels in which the cables run to ensure that drains are clear to prevent flooding under the streets. (Channels house the moving cable and other essential system parts, such as the pulleys that keep the cable moving and in place.) The cable car crews must also clean the track switches to ensure nothing blocks a cable car from going on its assigned route. For example, on Powell Street between Washington and Jackson, the system uses a track switch to direct cars over either the Hyde or Mason line.

Last Monday, we waited until the storm had passed to make sure the tracks and cables were ready to go.

Don’t get me wrong, the cable cars operate safely in the rain all the time. On occasion, though, there are more extreme conditions that argue for the prudent use of bus shuttles. Usually in rainy conditions, grip persons keep an abundance of sand in the cable car sand reservoir to help with braking. By dropping sand onto the rails before lowering the track brake, they are able to establish better friction for stopping.

It’s not just cold and wet weather that can affect the cable cars. Severe warm weather can also cause problems that are real doozies. During warm summer days, rail maintenance staff may go out to certain areas of the system to relieve pressure on the expanding metal slot in the street, through which the grip from the cable car connects to or “grips” the cable. The channels, where the cables run, are cleaned of debris to prevent fire that could be caused by extreme friction.

The bottom line is our cable car teams do everything possible to keep service rolling on the lines, but sometimes we have to make a difficult call to ensure safety. 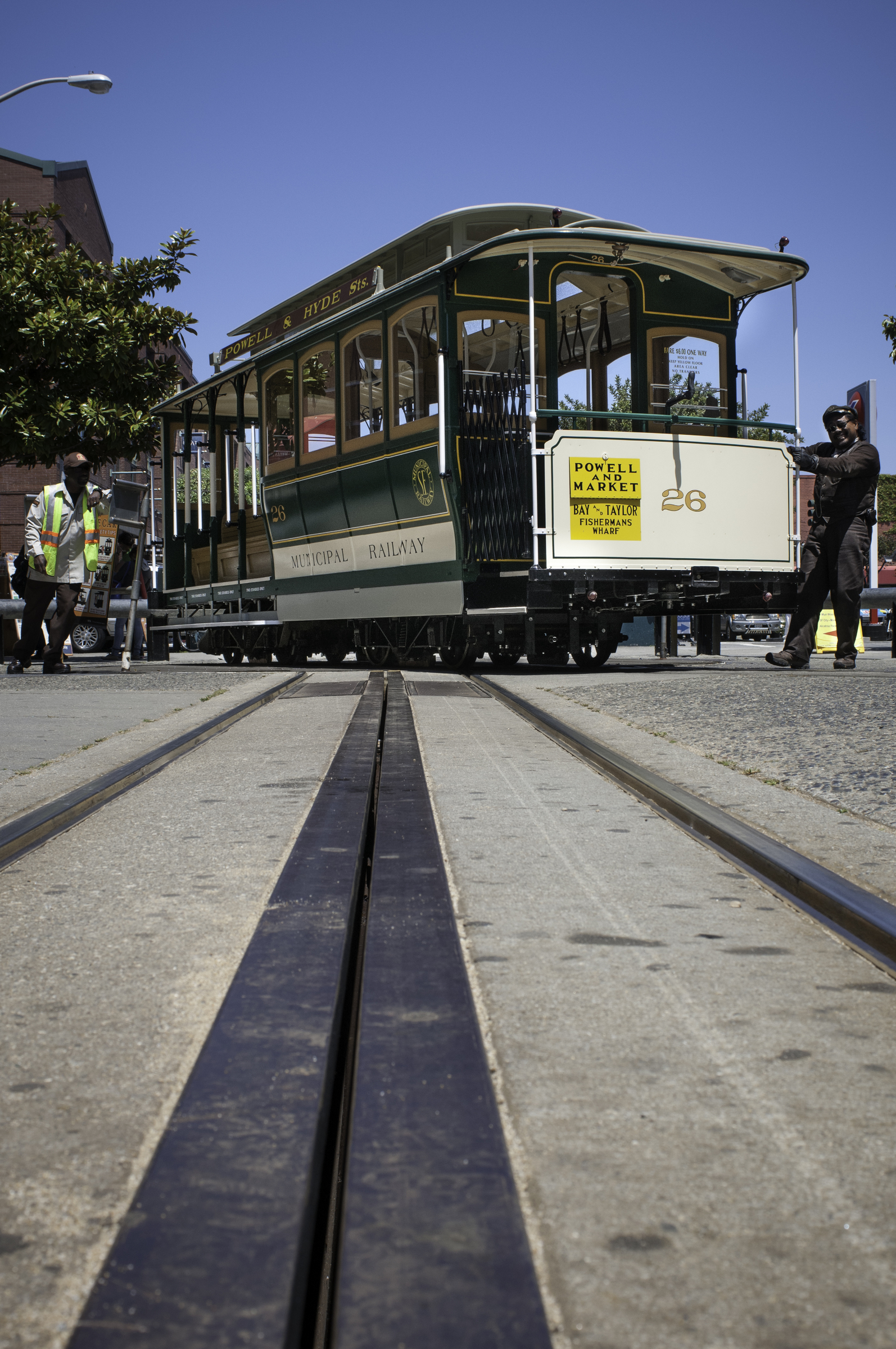 Conductor Calvin Watts and Gripman Val Lupiz turn Cable Car 26 around at the Beach and Taylor turntable duirng it's trial run. | May 23, 2012