Historic Travels on the T Third

For this Thursday’s “Throwback” blog, the SFMTA Photo Archive is taking a trip to the sunny, “bay side” of San Francisco, where today’s 3rd Street, now home of the “T” end of the “K-Ingleside / T-Third” light rail line, has long been the main thoroughfare for travels through Mission Bay, the Dogpatch and Hunters Point. 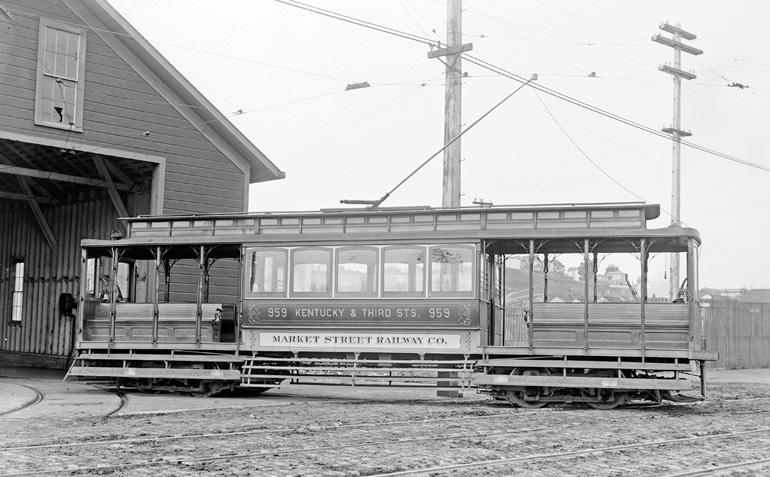 An early “Kentucky” streetcar in 1904. Although its ornate details and open-air benches resemble a cable car, this vehicle was powered by overhead electricity and operated on a route similar to the 3rd Street portion of the modern T Third light rail.

In 1895, the Kentucky electric streetcar line began operation on 3rd Street, then known as Kentucky Street. Back then, all the North-South streets in this part of town still sported the name of an American state: today’s 3rd Street was Kentucky Street, and Iowa Street still existed between Indiana and Pennsylvania (now Iowa Street is under the pathway of Interstate 280).

The neighborhoods along Kentucky Street, including Mission Bay, the Dogpatch, India Basin and Hunters Point, are connected by their history of bay-side industry. In the 1870s India Basin became home to a network of "Butchertown" slaughterhouses that relied on the daily influx of bay tides  to wash away offal. Although now most San Franciscans remember the contributions of the Hunters Point area to World War II military efforts, as far back as 1869 Hunters Point was known for its dry dock and shipbuilding complex. Transit lines on 3rd Street were important for the neighborhoods of workers and families that sprang up around the shipyard, Butchertown, various iron works and other factories on the edge of the bay. 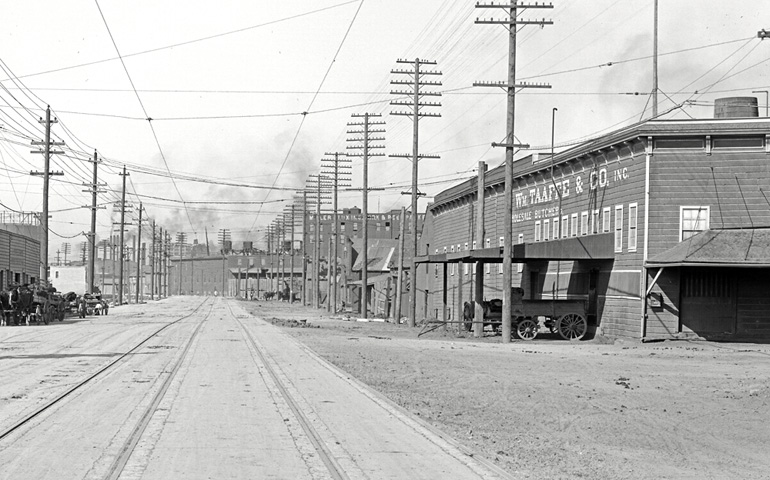 A view of “Railroad Avenue and 5th Avenue” in 1916. This location is now 3rd Street at Evans in India Basin. The Taaffe Company building on the right is part of the old “Butchertown.” The tracks down the middle of 3rd Street are for the streetcar lines that preceded today’s T Third light rail.

In San Francisco, most streetcar lines were converted to service by bus in the years just before and just after World War II. The 3rd Street streetcars were not excepted from this trend and were changed over to bus service in 1940. Although, from 1945-46, war-time conservation measures did see the lines revert to streetcar service. Around this time, Muni combined the different 3rd Street lines into one long bus route, the 15 Third, running from North Beach down Kearny onto 3rd, then all the way down 3rd Street to the Bayview neighborhood.

In 2007, San Francisco brought rail service back to 3rd Street with the T Third Line. Operation of the 15 Third bus stopped, and later on in 2007, the T-Third merged with the K Ingleside, creating a long line known as the KT: K Ingleside/ T Third. In 2016, Muni’s light rail lines are looking forward the arrival of sleek new trains.

For the past few weeks, the SFMTA Photo Archive has been bringing you the story of historic transit routes in San Francisco. Previous blogs covered the history of lines on Geary, including the Municipal Railway's oldest streetcar lines. Then SFMTA Photo took a look at the 14-Mission Yesterday, Today and Tomorrow, following that with the "fine" 9-San Bruno. If you still can’t get enough historic photos of San Francisco, there is always more to explore on Flickr, Twitter, Google+, and Instagram.