Skip to main content
ATTN: Due to staff scheduling, real-time monitoring will begin at noon today. We apologize for any inconvenience. (More: 11 in last 48 hours)
Subscribe
#TBT

Today’s Throwback Thursday is one for all of the “rambling and ambling” historians: a self-guided winter stroll through the Jackson Square Historic District with then-and-now views selected from the SFMTA Photo Archive.

Modern day Jackson Square is primarily a quiet neighborhood of tony galleries, but in the prime of Say Francisco’s 1850s Gold Rush heyday the area was known as “Sydney Town”—home to rough-and-tumble sailors, abandoned ships, and various other waterfront establishments.

Then-and-now: this simple building once housed vehicles of the Presidio and Ferries Railroad and was likely built in the 1880s. As the name implies, the small railroad—which had both cable cars and steam-powered vehicles—ran from the Ferry Building out to the Presidio. On the left, the structure in 2015; to the right, 1908.

At 444 Jackson is San Francisco Landmark 25, the Moulinie Building at 458-460 Jackson— immediately adjacent to the old Presidio and Ferries Railroad building. The Moulinie’s construction date of 1852 puts it among the ranks of the oldest structures in San Francisco. Strolling up and down the rest of this Jackson Street block, bounded by Montgomery and Sansome, will turn up no less than fourteen San Francisco landmarks, all wonderfully mapped, photographed and described at NoeHill.com.

Today it is hard to miss the fact that vistas in the Jackson Square neighborhood are dominated by the towering and photogenic Transamerica Building. The skyscraper pyramid now stands on the former site of the infamous Niantic merchantile ship, once buried under the streets of San Francisco and later excavated during construction of the Transamerica. 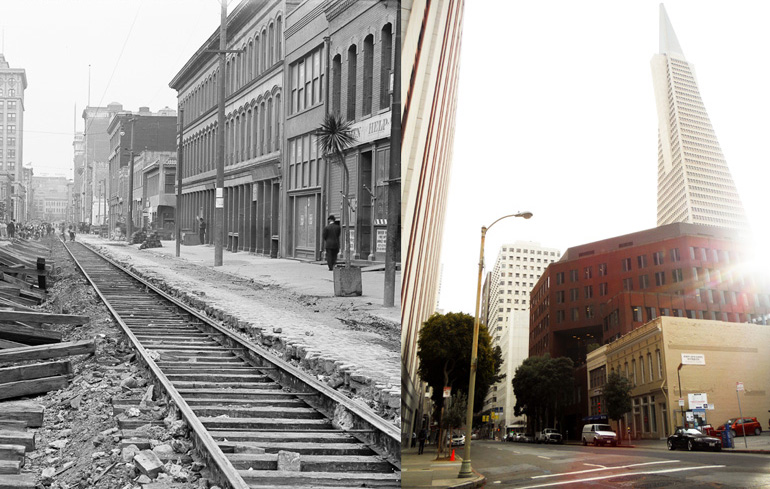 On the left: the view south down Sansome Street from Jackson in 1911. The two tan colored buildings in the contemporary image match up with those visible in the right foreground of the black and white archival image. The brick building visible in the modern image has replaced the 1911 structure at the end of the block, on the corner of Sansome and Washington.

To continue the winter history stroll, the SFMTA Photo Archive recommends grabbing a camera and your favorite walking shoes and checking out some of the neigborhood’s picturesque alleyways: our favorites are Hotaling Place, Osgood Place, and Gold Street.

If a winter stroll through Jackson Square piques your curiosity about the Barbary Coast, the Visitor Center at the San Francisco Maritime National Park has an excellent—and free—exhibit on San Francisco's Waterfront, including the myriad and mysterious buried Gold Rush ships below the Financial District.