Skip to main content
HeadsUp: Harvey Millk Day is this Sunday, 5/22, in the #Castro from 12 to 5 p.m. The #FMarket will have a reroute. https://t.co/OHpTF8oCcj (More: 19 in last 48 hours)
Subscribe
History In Motion

Today marks the 100-year anniversary of Muni's J Church rail line. Still looking spry for a centenarian, the J has operated since 1917, and it still essentially runs along the same route down Market and Church streets, through Dolores Park and Noe Valley.

While it’s not the oldest transit line in the city, the J Church is the oldest of Muni’s remaining original “letter lines," and it follows a unique path along its roughly seven-mile route. 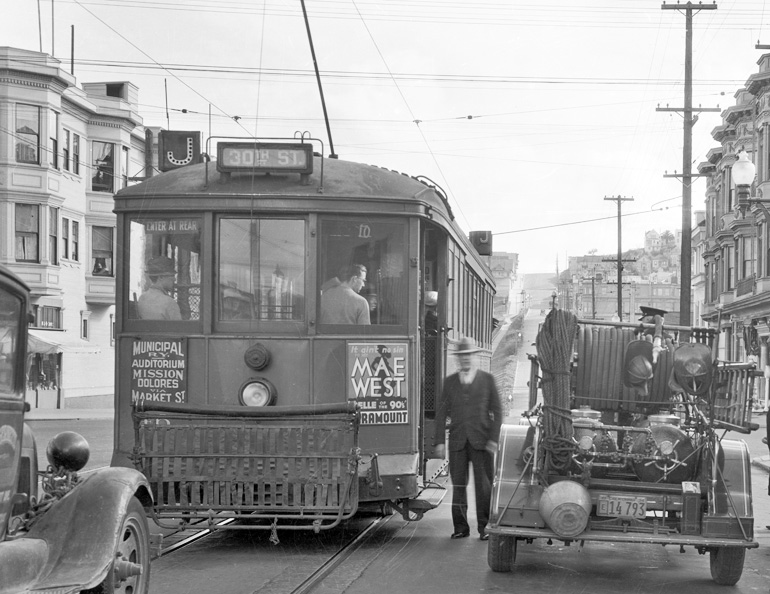 A J Line streetcar stops next to a fire truck outside Everett Middle School on Church at 17th Street in 1934.

Most of the J Line tracks were completed by mid-1916, but it remained incomplete in key sections due to squabbling between the private United Railroads Company, the City of San Francisco and residents who lived near the new line. 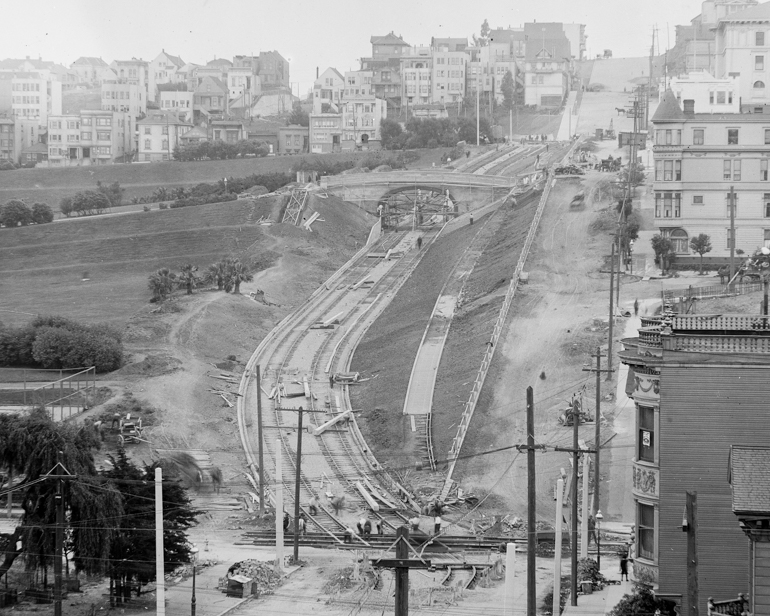 A view of the J Line tracks under construction circa 1915, at the northwest corner of Dolores Park near Church and 18th streets.

For several years, a group of San Franciscans who lived on the steep portion of Church Street over Dolores Heights lobbied for the line to be served by cable cars instead of electric streetcars in their neighborhood. But by this time, most saw cable cars as outdated and slow forms of transit, and the J prevailed as a streetcar line.

The line was, however, built with a unique route to tackle Dolores Heights. Instead of a straight path over the hill, the J line was built on a serpentine path through a cut in Dolores Park, and with "S” curves south of the park, to allow streetcars to climb and descend the grade with ease. 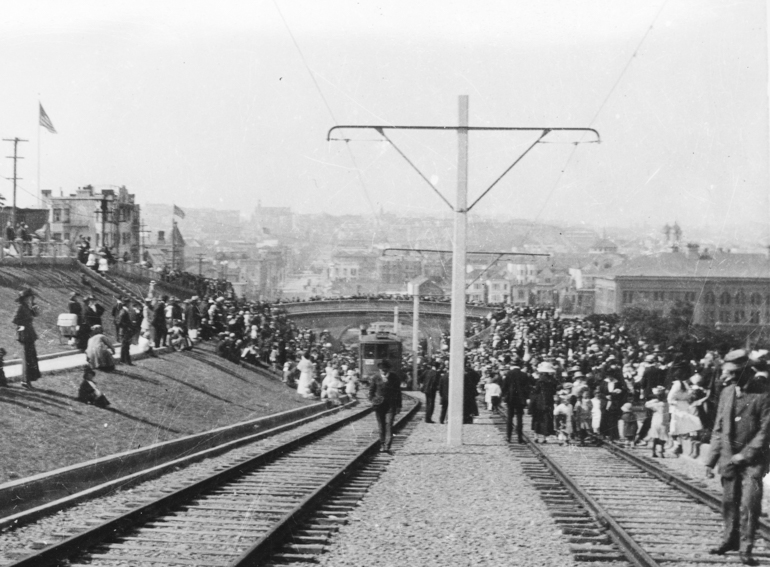 On its opening day of August 11, 1917, a crowd of people swarmed Dolores Park to watch the first streetcars operate on the J Church.

After the arguments and the construction dust settled, the J Church made its debut to great fanfare on Aug. 11, 1917. On a sunny Saturday, a throng of residents watched as the first streetcar, operated by Mayor James Rolph, motored up the tracks into Dolores Park. 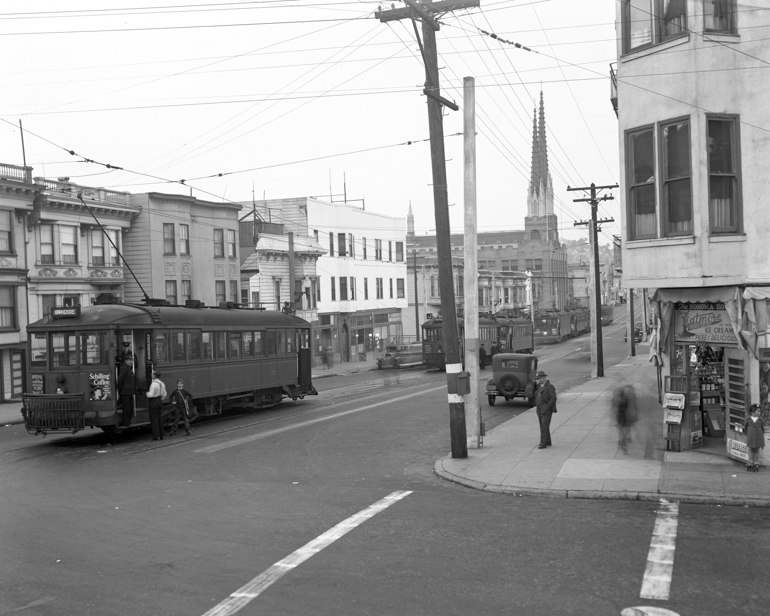 Streetcars lay over at the J Church terminal at Church and 30th streets in Noe Valley on the evening of March 13, 1940.

For about eight decades, the J ran from the Ferry Building to its terminal at Church and 30th streets in Noe Valley, providing a vital downtown connection for residents. Even though the J continues past 30th today, the "wye track" (a triangular track junction) used for this terminal remains on 30th Street. 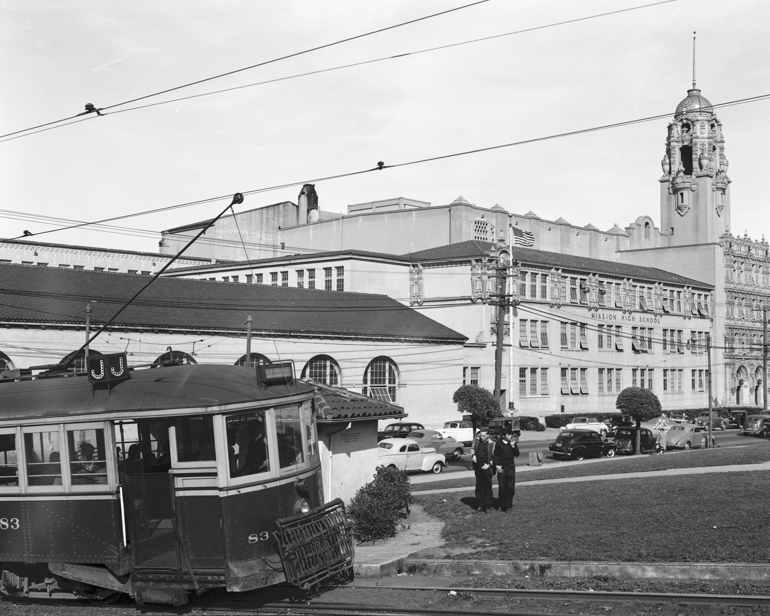 Mission High School students wait for the J at 18th Street at the bottom of Dolores Park in February 1948 – still a familiar sight to this day.

An important benefit that the J still provides today is its service to a range of schools, from elementary to college. A century after the first streetcars rolled by Mission High School in 1917, its students can still be found riding the J. 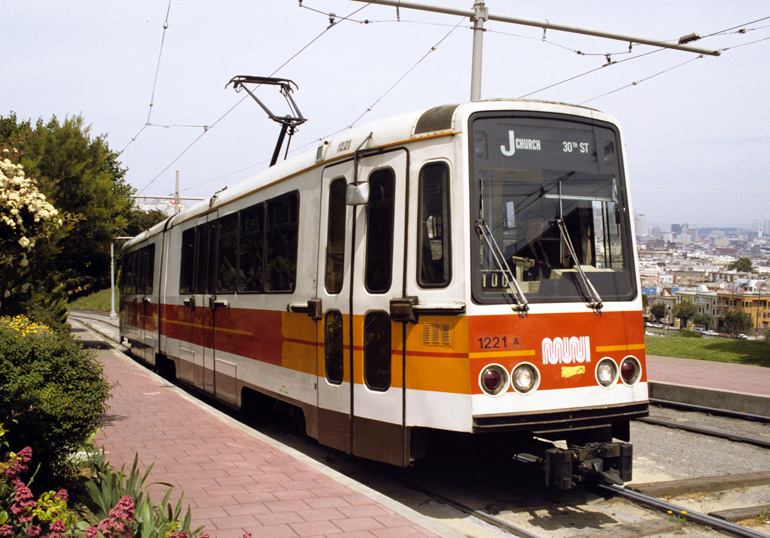 A 1980s light rail vehicle stops at the top of Dolores Park on the J, one of Muni’s most scenic rail lines.

By the late 1970s, the BART system was operational, the Muni Metro system was nearing completion and Muni started planning to extend the J to the Balboa Park BART Station. This extension would provide better service and a new regional transit connection for the south-central part of the city. While an extension of the line had been studied as early as the 1920s, the job couldn't be completed until the 1990s.

The J Line extension was constructed along San Jose Avenue through the "Bernal Cut", a pathway built by the San Francisco & San Jose Railroad in 1863 to run trains in between the slopes of Bernal Heights and Glen Park. 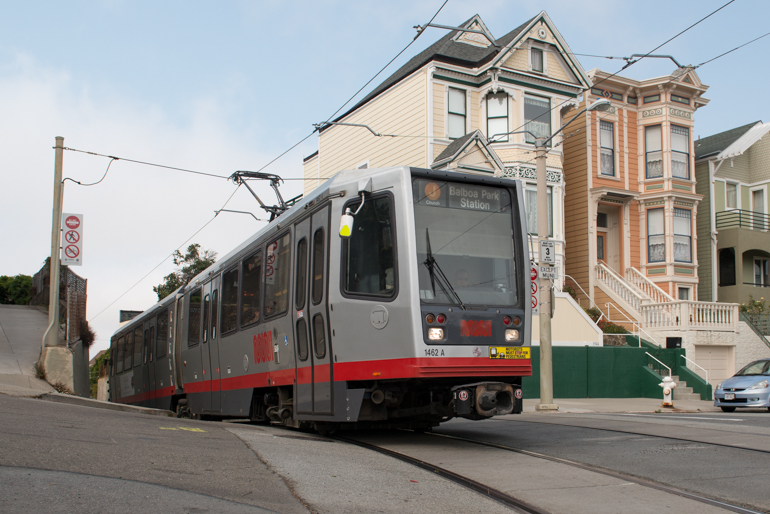 An outbound J train passes by two Victorian houses at 21st and Chattanooga streets, as it has for 100 years.

Today, the J continues to provide a vital transit service enjoyed by locals and visitors alike as it snakes its way up Dolores Heights past ornate Victorian houses. No doubt, it will continue to do so for another 100 years.