How Friedel Klussmann Saved the Cable Cars 70 Years Ago 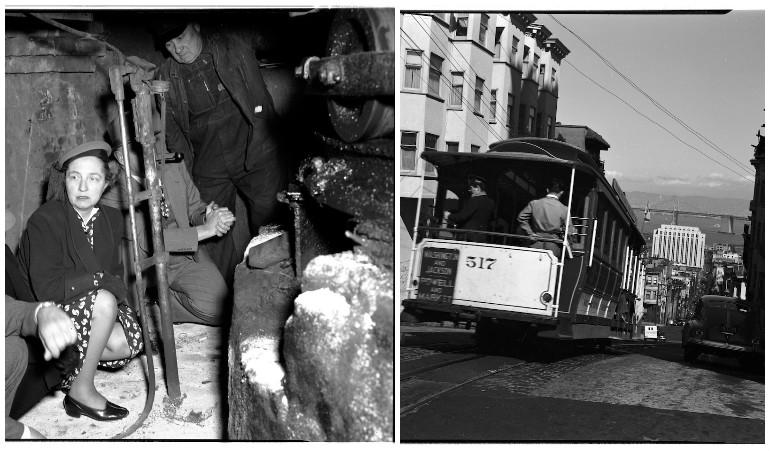 Friedel Klussman (left) examining the inner workings of the cable car turntable at Powell and Market streets in 1949.

Cable cars are, truly, only in San Francisco. And for that, we have Friedel Klussmann to thank.

Seventy years ago, some city leaders wanted to tear out the 1870s-era transit system of wooden vehicles towed by an underground cable system, which they saw as more of a costly nuisance than a joyous marvel. Klussman led the campaign that preserved much of the wondrous system that still draws millions of visitors from around the world each year (and, yes, carries some of us commuters).

Klussmann was remembered in an article in the SF Chronicle this week, which marks the 70-year anniversary of when “Mayor Roger Lapham proclaimed, ‘Junk the cable cars!”’ (as the Chronicle’s headline put it at the time).

In his annual message to the Board of Supervisors on Jan. 27, 1947, [Mayor Lapham] said, “I know there are strong sentimental reasons for keeping this old, ingenious and novel mode of transportation. ... The fact remains that the sentimentalists do not have to pay the bills.” ...

Lucky for the cable cars and the city’s fabric, Friedel Klussmann had other ideas.

Klussman, who passed away in 1986, played such a legendary role in saving the endangered cable cars that Muni dedicated a cable car turntable to her. The "Freidel Klussmann Memorial Turnaround," at the northern end of the Powell-Hyde Line at Hyde and Beach streets in Fisherman’s Wharf, was named so in 1997.

Here’s a bit more about Klussmann’s story from our webpage on the history of cable cars:

By 1947, the lower operational costs of buses prompted Mayor Roger Lapham to declare, "the city should get rid of all cable car lines as soon as possible."

In response, Friedel Klussmann founded the Citizens' Committee to Save the Cable Cars. The committee began a public campaign showing that the cable cars’ value to San Francisco was far greater than their operational cost. They succeeded in placing an amendment on the November ballot, Measure 10.

Newspapers picked up the story and public support grew quickly. Life magazine did a photo spread on gripmen. Celebrities rallied for the cable cars; business owners realized that tourists didn't come to San Francisco to ride the buses.

Measure 10 passed in a landslide victory and the city of San Francisco had rallied to save the Powell Street cable car system.

Most of the original cable car lines were destroyed by the Great Earthquake and Fire of 1906 and replaced with electric streetcars. And as a result of 1954’s Proposition E, which was narrowly passed by voters, the five lines that remained were reduced to the three lines we know today: The Powell-Hyde Line, the Powell-Mason Line and the California Line.

But were it not for Klussmann’s intervention that re-ignited the people’s love of cable cars in that crucial turning point in 1947, we might have lost them all.

In the saga since, the preservation of our cable car lines has been enshrined in a number of ways. From our webpage on Muni's history:

In 1964, the cable car system was declared a National Historic Landmark. These three lines continue to operate today as a testament to San Francisco voters who ensured their survival in the age of Sputnik.

Check out the Chronicle article to see the paper’s “photos, stories and pages from the era when a fleet of San Francisco emblems was threatened with a trip to the scrapyard.”

You can find many more photos of cable cars through the decades at our SFMTA Photo Archive, which now has more than 8,000 photos online spanning 50 years, and learn more at our webpages on the the history of Muni and cable cars.