San Francisco was once home to many graveyards, but there's one that typically escapes notice in the story of our long-lost burial grounds - the streetcar "graveyard" in the Inner Sunset District. 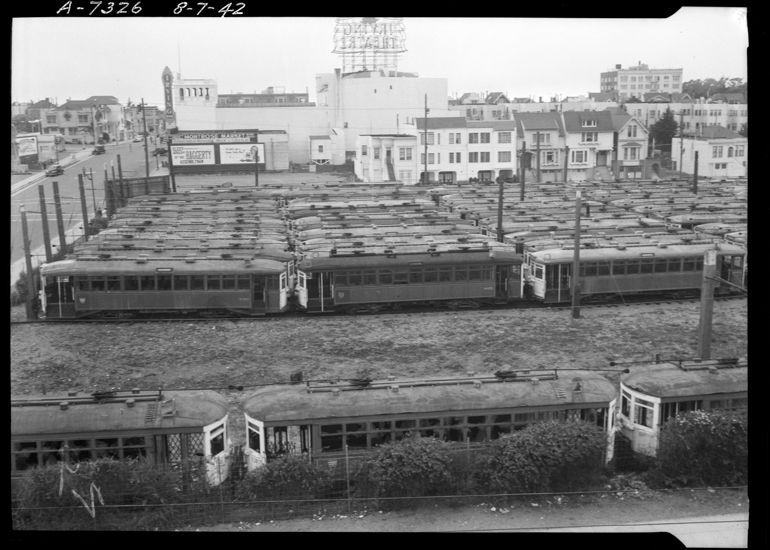 The Market Street Railway Company's streetcar "boneyard," as seen from overhead looking west on Irving and 14th on August 7, 1942.

The "boneyard," as it's known by many local rail historians, was located on the block bounded by Funston and 14th avenues, Lincoln Way and Irving Street.

Originally owned by the United Railroads (later Market Street Railway Company), this huge lot was meant to become the "H Street Carhouse" as far back as 1907, when the area was all but sand dunes and a smattering of houses. But those plans never came to fruition, and the land was only used as a storage yard. Eventually, it became home to dozens of retired streetcars waiting to go to that great big street railway in the sky. 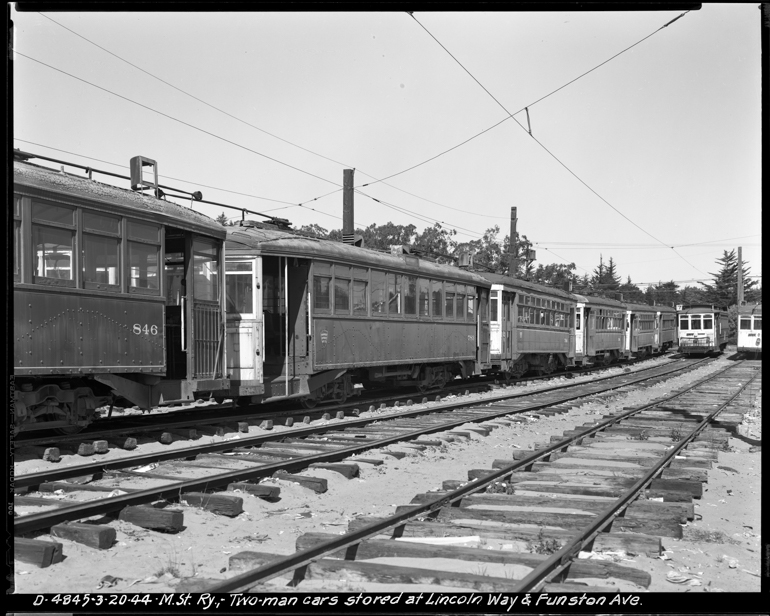 Derelict cars await the scrap heap among the sand of the Sunset after years of service on the streets of San Francisco. Photo taken March 20, 1944.

After the Market Street Railway merged with Muni in 1944, Muni continued to use the yard to store surplus equipment. But as the neighborhood grew during the post-war era, residents soon complained about the run down, vandalized cars, leading Muni to scrap them and clear the land.

By the end of the 1950s, the block was redeveloped into a large apartment complex on the north end and a grocery store on the south end, leaving no trace of the hundreds of cars that spent their final days there.

So if you’re out at Funston and Irving this Halloween, and you hear a low rumble and the screech of steel wheels, it may not be the N Judah – it may just be the lost soul of a long-gone streetcar calling from the beyond the boneyard grave.

You can learn more about the old streetcar boneyard in this great article and podcast (#182) from the Western Neighborhoods Project. See more photos on the SFMTA Photo Archive website and follow us on Twitter and Instagram.