For this "Throwback Thursday," we'll share a view of life in San Francisco from today’s date, April 28, in 1931. This photo shows a bustle of activity in the roadway during streetcar track reconstruction on Sutter at Jones Street. With the aid of Crane Car 0131, a specialized work streetcar, a crew lays new tracks for the Market St. Railway Company's 1, 2 and 3 lines, which ran down Sutter. 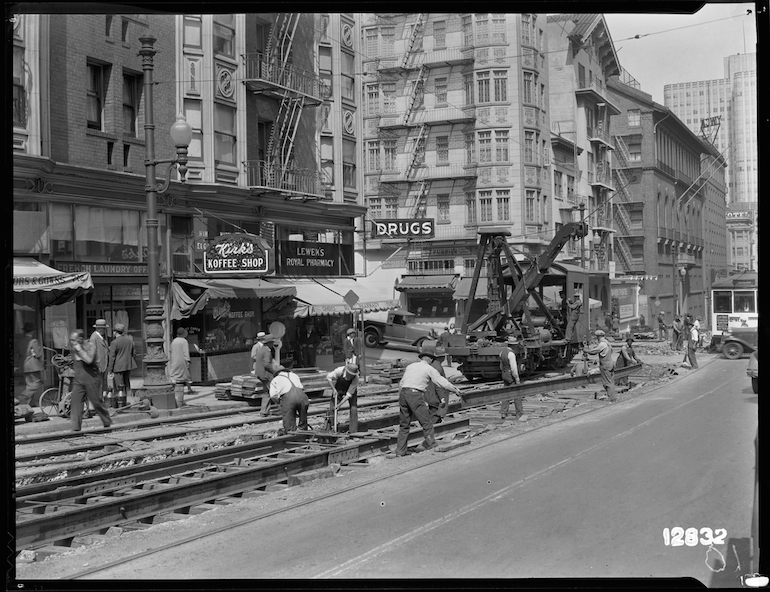 Getting around San Francisco in 1931 was quite different from today. There were no freeways, no Bay Bridge nor Golden Gate Bridge, and the ferry system and El Camino Real were the main ways of getting into town. Without major roadway infrastructure and with lower auto ownership due to the Great Depression, fewer cars crowded SF's narrow streets and streetcars reigned king.

Nearly every transit line in the city was served by rail and the rumble of steel wheels on tracks was part of the everyday din of the city.

However, during this streetcar heyday, San Francisco’s transit system was disjointed. The SF Municipal Railway operated about 12 streetcar lines and the privately-owned Market Street Railway Co. operated 41. These networks spread across town from the ferries to the beach, but the competition between the two systems meant that there were two different fares to pay, two schedules to read and duplicate lines running on parallel (and sometimes the same) streets.

All of this would change in the mid-1940s. But for today, just imagine yourself back on April 28, 1931. Perhaps you'd be sitting in "Kirk's Koffee Shop", watching these guys lay tracks or walking to the french laundry next door to pick up your clean linens.  Or maybe you'd be rolling by in that White Front #2- Sutter & Clement Line streetcar, heading out to take a swim at Sutro Baths on the edge of the West.