Share this: FacebookTwitterEmail
By
Aaron Bialick (no longer with the SFMTA)
Tuesday, March 14, 2017 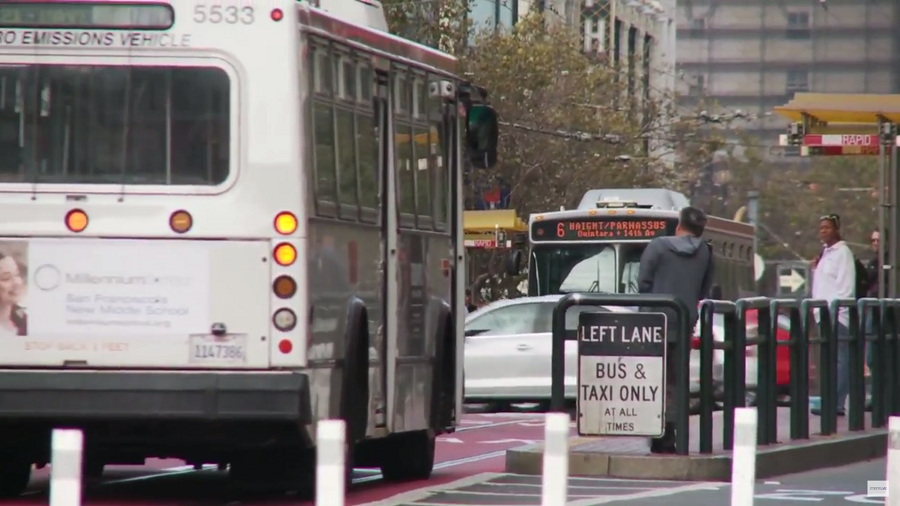 A screenshot from the Streetfilms video, “Riders First: How Buses Are Moving San Francisco Forward.”

It can be easy to lose track of all our efforts to move Muni Forward, so it’s helpful to get a fresh look and take stock of the work we’ve done.

This policy and implementation effort, dubbed “Muni Forward,” has been bolstered by a $500 million dollar injection of funding approved by voters in 2014, which enabled new capital investments to improve transportation access in an already service-rich city.

As Muni's operations director, John Haley, put it in the video, “It's been a really transformative period over the last five or six years for us.”

Muni Forward “was the first real comprehensive look at the entire network not just a couple of lines in a few hours we looked at the system top-to-bottom,” he said.

Here’s a snapshot of our recent improvements to bus service, which are the focus of the video:

Of course, Muni is comprised of a variety of vehicles, and we’re also boosting Muni Metro service: From the L Taraval Rapid improvements going in now, to double stopping in the subway, to focused increases in Metro shuttle service to reduce crowding, to the new generation of Muni trains rolling out this year.

As we make further improvements to the system, we continue to listen to our riders’ needs. With a record 70 percent of riders rating Muni service “good” or “excellent” in our latest annual customer satisfaction survey, the improvements seem to be noticed.