Muni Heritage Day returns this Saturday, June 4 from 10 a.m. to 4 p.m., after a two-year hiatus. This event brings our unique fleet of vintage buses and historic streetcars back on San Francisco streets for free rides. All rides will originate from Steuart Street and Don Chee Way, just outside the SF Railway Museum. In preparation for Saturday’s festivities, we look back at the origins of this event in the 1980s through some newly scanned historic photos. 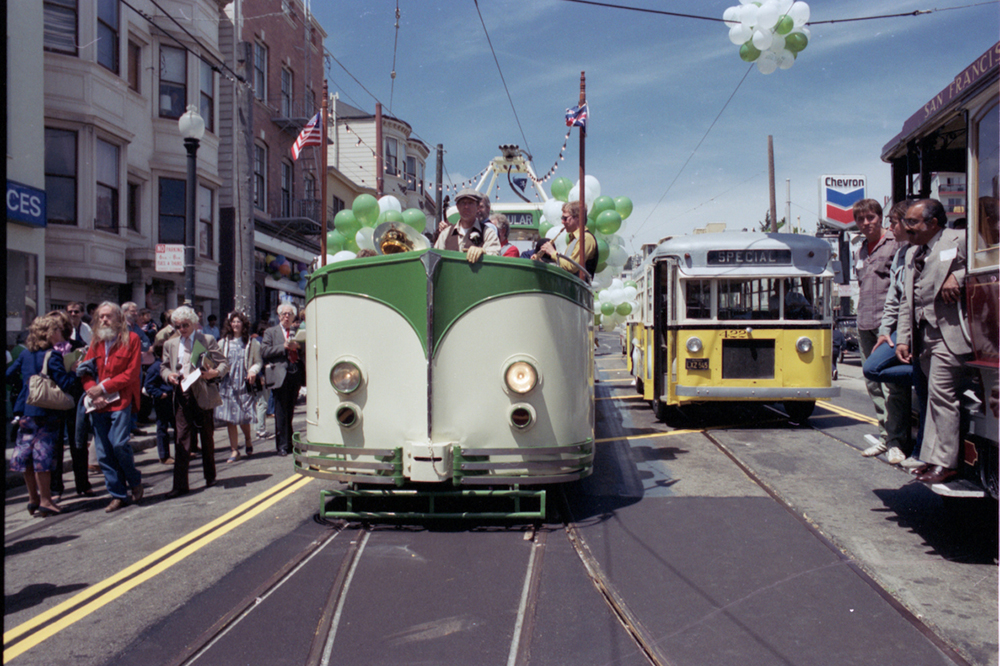 Seen here at the 1983 Trolley Festival, the “Boat Tram” has always been a crowd pleaser.

The story of Muni Heritage is intertwined with both that of the F Line and a series of events called “Trolley Festivals”. The inaugural Trolley Festival in 1983 was the first time Muni ran special rail service using a collection of vintage cars from San Francisco and around the world. Today, Muni Heritage carries on this tradition for people to ride vehicles that are not normally in service. 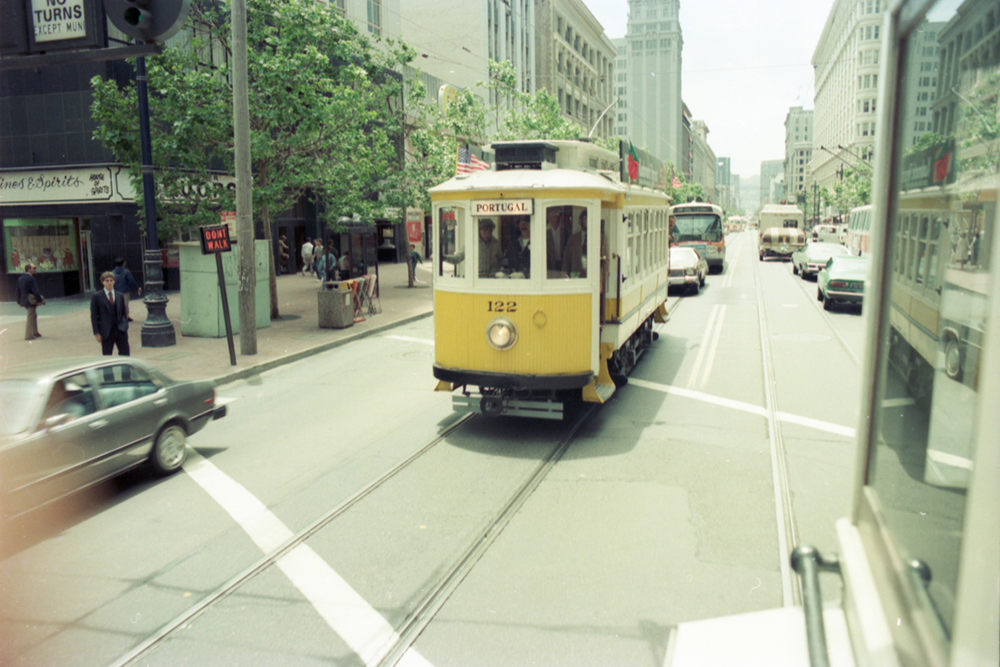 Streetcar 122 from Portugal was one of the cars from around the world that ran in the 1983 Trolley Festival.

The first Trolley Festival was organized in response to two major changes to the city’s transit system in the first few years of the ‘80s. In 1981, the Muni Metro system opened with modern light rail vehicles running in a brand-new subway under Market Street. While an improvement for day-to-day rail operations, the opening marked the first time in nearly 80 years that streetcars did not run on the surface of Market. Over the decades, streetcars had become an integral part of the daily life of downtown, working themselves into the fabric of the city’s identity. The move into the subway left a hole in what people were used to seeing, hearing, and riding on Market Street. 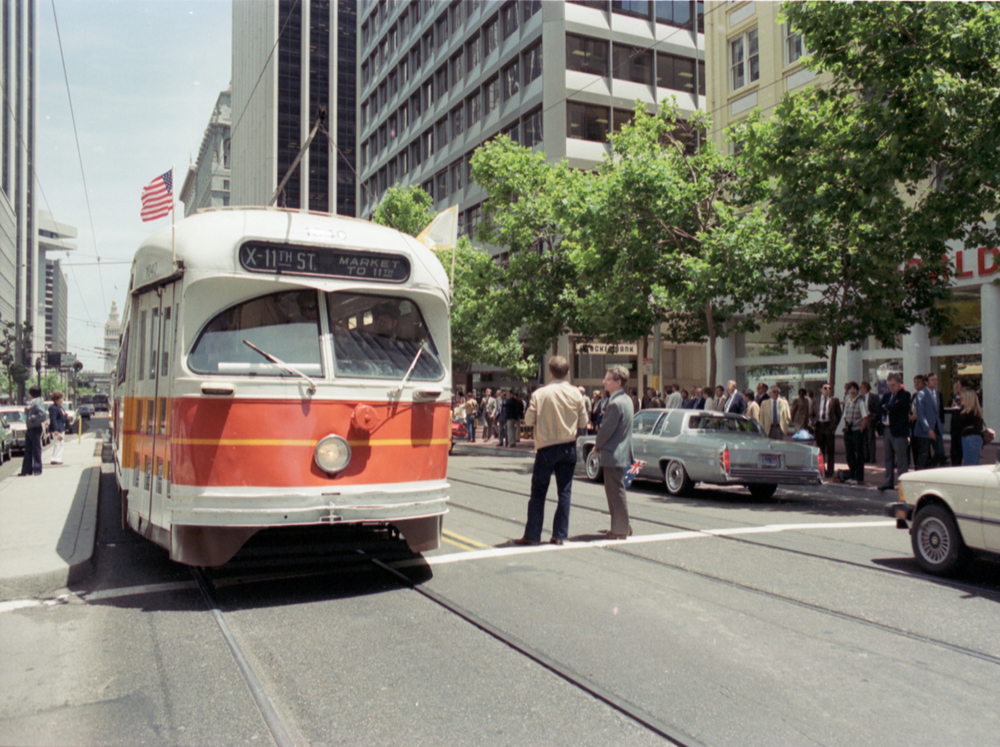 This PCC type streetcar, Muni’s number 1040, was a common sight on Market for decades before they were retired in the early 1980s.

Meanwhile, the cable car system was slated to be shut down for two years between 1982 and 1984 for a complete rebuild. One of the city’s icons would soon be missing from the streets with nothing special to replace them.

Combined, these two events not only threatened to change the look and feel of the city,  but also the bottom line for businesses in neighborhoods along Market and the cable car lines. In response, a handful of transit & business advocates and Muni staff put together a proof-of-concept plan for the summer of 1983. For four months, Muni would run some of its own historic vehicles as well as a variety of special cars from around the world on a regular daily schedule along Market from the Castro to the Transbay Terminal downtown. 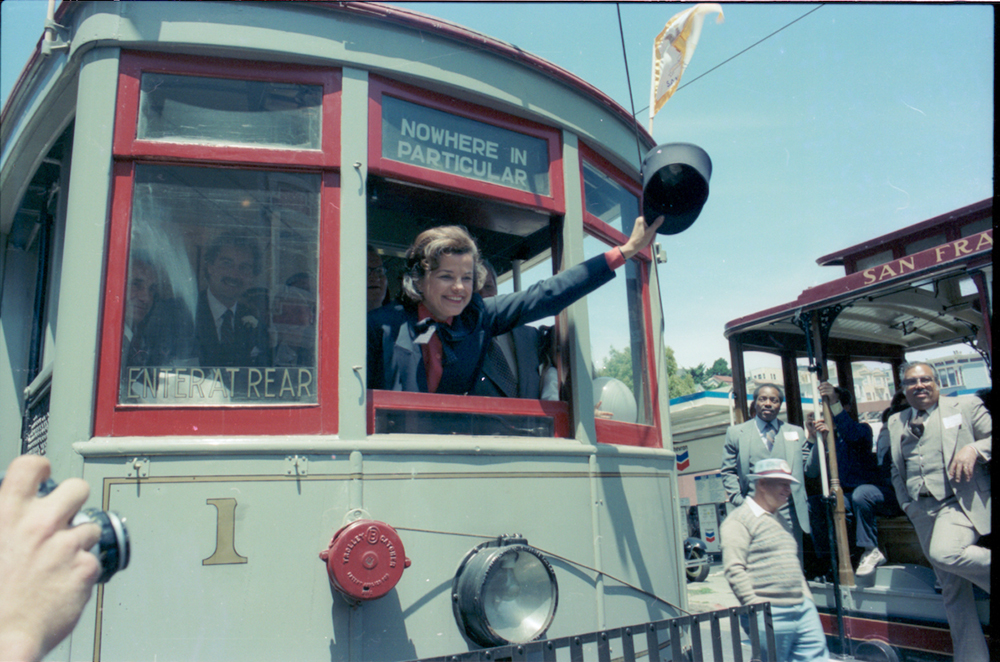 Mayor Diane Feinstein launched the festivities on June 23, 1983, with an inaugural ride on Muni’s Streetcar 1, which will be giving free rides this Saturday for Muni Heritage Day.

The 1983 festival was such a success that it was repeated annually until 1987, even after the cable cars returned. The event proved that the city could benefit from running a distinctive transit service for locals and visitors alike. It also paved the way for similar future events and the F Line, which opened in 1995. 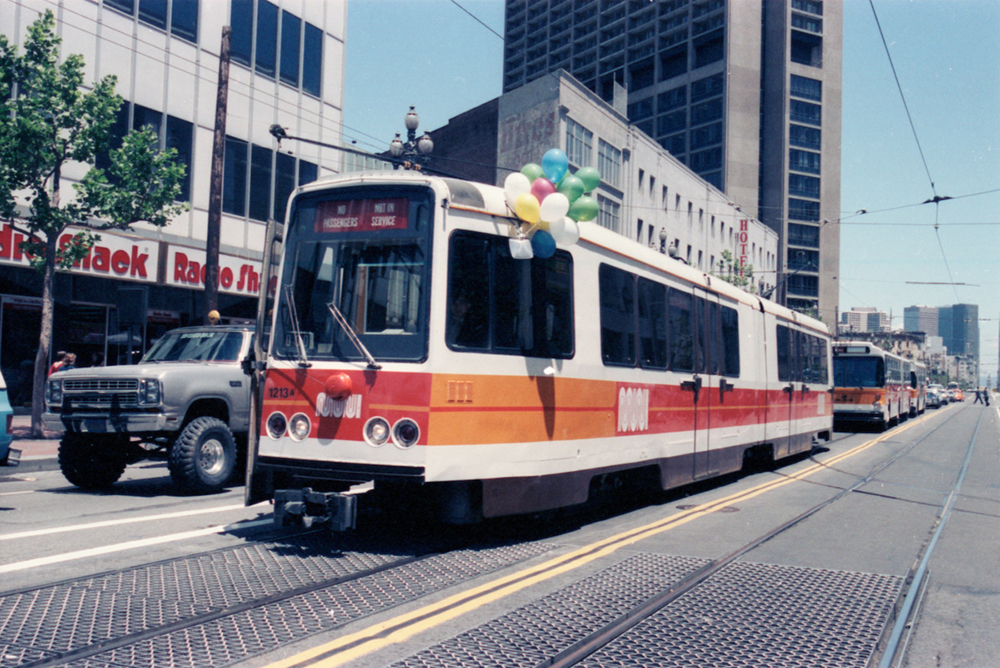 This shot from the 1984 Trolley Festival catches a very rare scene- Muni’s first generation of LRV on the surface of Market Street at 11th Street.  These cars did not normally run above ground on Market but instead used the newly opened subway.

Today, Muni Heritage carries on the tradition of celebrating our transit history by bringing a unique transportation experience to the streets of San Francisco. Come out this Saturday and hop onboard one of the special buses or streetcars for a ride back in time.

For more in-depth reading on this topic, Muni’s preservation partner, Market Street Railway has two great articles about the 1980s Trolley Festivals and some of the people behind them.