Skip to main content
HeadsUp: The annual #ChineseNewYear Parade starts this evening at 5:30pm from Market & 2nd St. Some #SFMuni reroutes will begin at 10am while others at 2 p.m. Regular svc will resume after roadway is clear (approx. 10pm). For svc details:https://t.co/qNRIndWkgN https://t.co/qs2bn4vliz (More: 25 in last 48 hours)
Subscribe 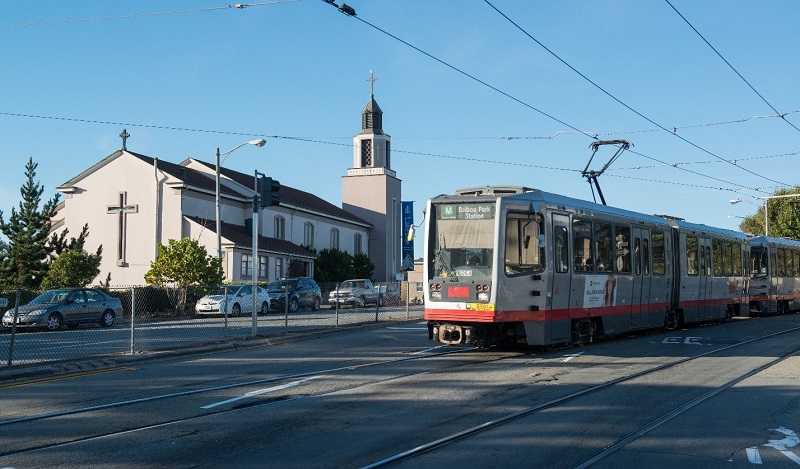 Starting next week, Muni's M Ocean View Line will undergo vital infrastructure improvements on 19th Avenue near SF State University. Work on the tracks will require M service to be substituted by buses on four weekends starting on Oct. 27. On two of those weekends in November, northbound 19th Avenue will also be closed to traffic (more on that below).

The M Ocean View Improvements Project will repair vital transit infrastructure, make M service more reliable and make this area of 19th safer for people who walk and use Muni. Planned improvements include replacement of the aging train tracks on 19th between Winston and Eucalyptus drives, a safer pedestrian crossing on 19th at Junipero Serra Boulevard, vehicle safety measures at the trackway entrances and upgraded traffic signals. 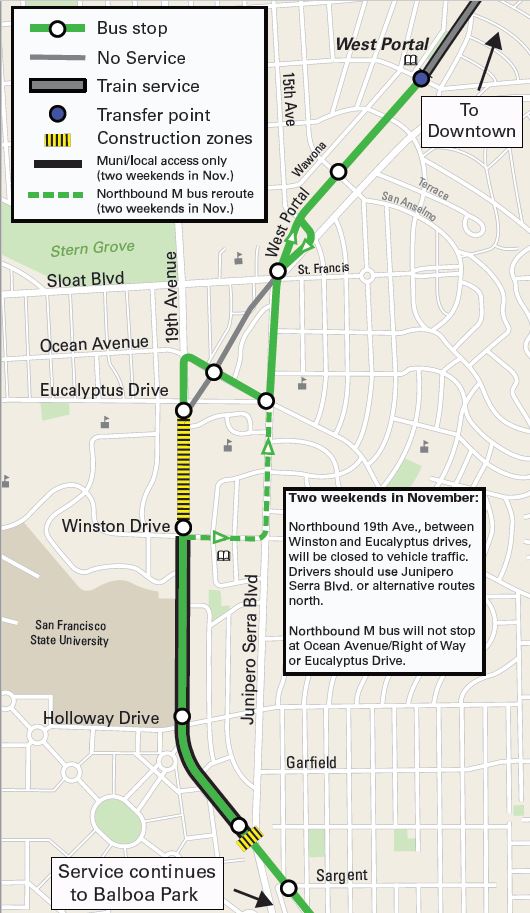 If you use the M Ocean View on these weekends, we recommend planning for extra travel time. M bus arrival predictions will be available on digital signs at Muni stops and on NextMuni.com.

Construction will take place on two areas of 19th Avenue:

Construction is expected to begin at the 19th and Junipero Serra intersection on Oct. 9, and it may require traffic lane closures at times to allow crews to work safely next to the sidewalks. The construction on 19th, between Winston and Eucalyptus, will begin later in October.

All construction is expected to be completed before Thanksgiving (Nov. 23), weather permitting.

On two weekends in November, northbound 19th Avenue will be closed to vehicle traffic from Winston to Eucalyptus Drive. We will provide updates once those weekend dates are finalized.

During these traffic closures, northbound drivers are advised to take alternative routes. Southbound 19th Avenue will remain open to traffic. These closures may also cause increased traffic on nearby streets and other thoroughfares.

During these traffic closures, Muni buses on the following routes will detour around this section of 19th Avenue in the northbound direction: