Skip to main content
UPDATE: #JChurch will not resume regular service just yet at as crews clean up around the tracks. Will update. (More: 46 in last 48 hours)
Subscribe

Getting on the N Judah in neighborhoods like Cole Valley just got a lot easier. This week, we added more Muni N trains to carry inbound crowds during morning rush hour starting near the University of California, SF.

That means that downtown commuters who board the inbound N east of UCSF - where trains coming from the Sunset are often already packed - can now be among the first passengers to board a roomy train starting at Carl Street and Hillway Avenue.

“I’ve been working with Muni on this for three years,” said District 5 Supervisor London Breed.  “I am so excited to see empty trains pull up at Carl and Cole and know that people will actually be able to get a seat—and get to work on time.  We’re making big improvements to Muni’s busiest line.” 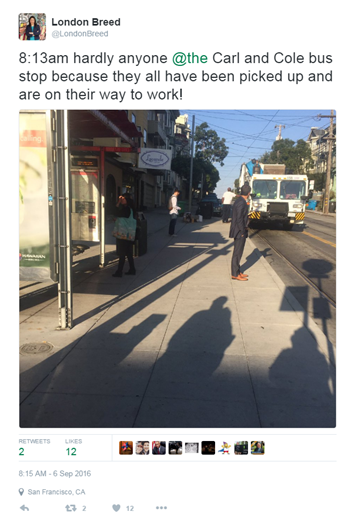 Breed posted on Twitter about the difference made by additional N Judah trains in Cole Valley during yesterday’s morning rush.

We know how frustrating it can be to have a Muni bus or train show up, only for it to be too full to get on. With these new “short trip” trains, the strategy is to use limited resources to provide more service where it’s needed most.

Here’s how it works: Each morning weekday rush hour (between about 8 a.m. to 9 a.m.), two additional trains are scheduled to depart their yard and head straight to the start point at Carl and Hillway. They then start service inbound to Embarcadero Station, where they turn back and repeat the process.

Each of the two trains provide two inbound trips, for a total of four additional N trips to load up passengers starting just east of UCSF. 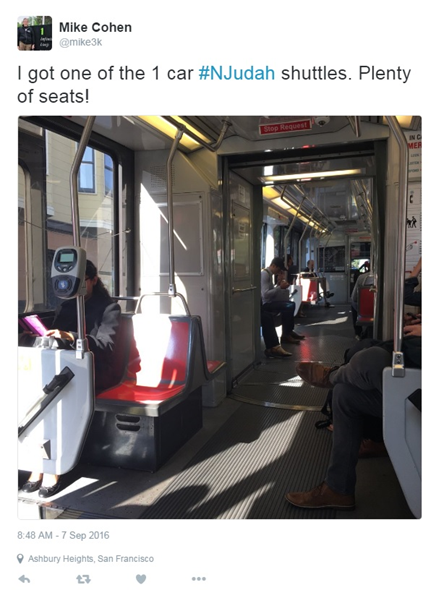 In case you’re wondering, “Why start at Carl and Hillway?”: That’s one of the limited locations in our Metro system that has crossover tracks that allow trains to turn back. This spot sits just west of where the N gets packed the most.

This is just one of many efforts to provide faster, more reliable service and relieve crowding on Muni lines like the N Judah.

Here are recent improvements we’ve made on the N - Muni’s busiest Metro line:

We’re also adding smarter traffic signals to give N trains priority, and better boarding areas are coming to the Inner Sunset within the next 18 months.

Across all Metro lines, we’ve also added weekend service in April, recently boosted train maintenance to reduce breakdowns by 50 percent and we’re reconfiguring trains seats to provide more standing room. Starting next year, the next generation of new trains will start rolling in to add to the fleet.

Check media coverage about the new N service from the SF Chronicle, Hoodline, SFBay and the SF Examiner.