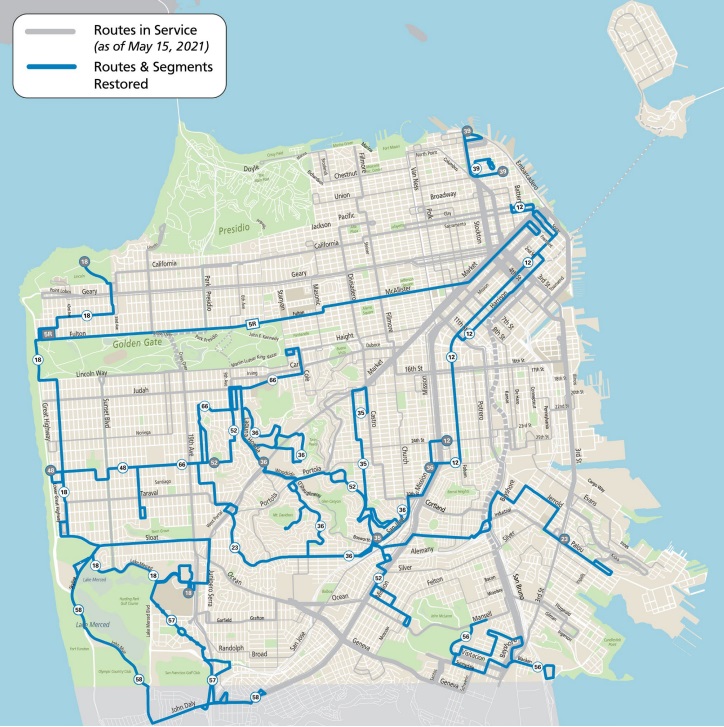 Following major service restorations on May 15, with the KT Ingleside-Third and N Judah Muni Metro rail service resuming, historic street cars returning and subways reopening, the SFMTA is already hard at work planning to restore even more service later this summer. This effort will potentially close almost all of the Muni service gaps across the city, bringing 98% of San Francisco within two to three blocks of a Muni stop.

This August, pending the relaxation of pandemic protocols and physical distancing restrictions, the SFMTA is expecting to bring back more than a dozen bus routes that were temporarily suspended as part of pandemic-related service reductions at the beginning of the crisis, including:

With these plans for significant service increases, the SFMTA continues to be focused on citywide connectivity, maximizing the limited number of operators and vehicles available to safely operate as the city reopens. And we are doubling down to increase Muni access in neighborhoods identified by our Muni Service Equity Strategy. As of January 23 this year, 100% of residents in these neighborhoods can conveniently access a Muni stop within two or three blocks of their home.

Here are some additional details on the service changes we expect to implement in August:

With current ridership on the 5 Fulton increasing, the popular 5R Fulton Rapid is slated to return.

The 18 46th Avenue is expected to head back into service, providing westside residents in the Richmond District, Outer Sunset and near Stonestown a critical north-south connection that should ease demand on the Great Highway and surrounding streets and provide a boost to local businesses.

Making a key east-west connection, the 23 Monterey from the Bayview District to West Portal Station would also come back online. This augmented restoration would close a gap on the hills around Sunnyside and St. Francis Wood. The 23 Monterey would terminate at West Portal Station providing a new link to Muni Metro and save time by no longer needing to travel along the more congested Sloat Boulevard section of the route.

The 36/52 Special launched on May 15 would be replaced by the restoration of the full 52 Excelsior and 36 Teresita routes. To provide additional access for hilly districts, the 52 Excelsior route would run along a segment previously covered by the 6 Parnassus along 9th Avenue and Quintara in Golden Gate Heights.

The 56 Rutland would restore access to residents in sections of Visitacion Valley and Little Hollywood. In addition, a new extension to Mansell would provide direct connections to the 29 Sunset and Burton High School. Over the past year, the 57 Parkmerced saw much higher demand in the Parkmerced portion of the route than the eastern portion along John Muir Drive, so with the August service changes, the route is being segmented. The new 58 Lake Merced route picks up the both the John Muir portion of the 57 and Sloat section of the 23 Monterey while still connecting to BART. It would also offer new connections to popular shopping districts at Stonestown, Lakeshore, John Daly Boulevard and Top of the Hill in Daly City.

The 66 Quintara would be restored and extended, first eastward to UCSF and Haight Street via Parnassus Avenue.

In addition, just in time for the new school year, some of Muni’s “school trippers” - additional runs on key routes at peak school hours – would be reinstated as well.

As part of the SFMTA’s commitment to bring back Muni better, these service improvements would allow more people to ride safely on each bus, reduce the number of buses needed on the existing routes and allow for additional routes to open in the future. These efforts are only possible because of the leadership of our staff and operators, district supervisors, community members and other stakeholders and customers who have continued to work hard to overcome constraints to restoring service.

Below is the complete list of proposed service changes. Please note that these restorations are dependent on the relaxation of pandemic protocols and physical distancing restrictions and are subject to change. For the most up to date information with free language assistance and accessibility, please call 311 or 415.701.2311 or see the COVID-19 Muni Core Service Plan.

For more information on frequency and hours of service, read more on the COVID-19 Muni Core Service Plan.