Muni's Gyrobus That Never Was

Muni has long strived to make innovative improvements to service while reducing the environmental impacts that come with operating a transit system. In the early 1970s, Muni decided to explore a few interesting alternatives to traditional bus propulsion systems to achieve these goals. One of those alternatives is depicted in today's photo from 1972. 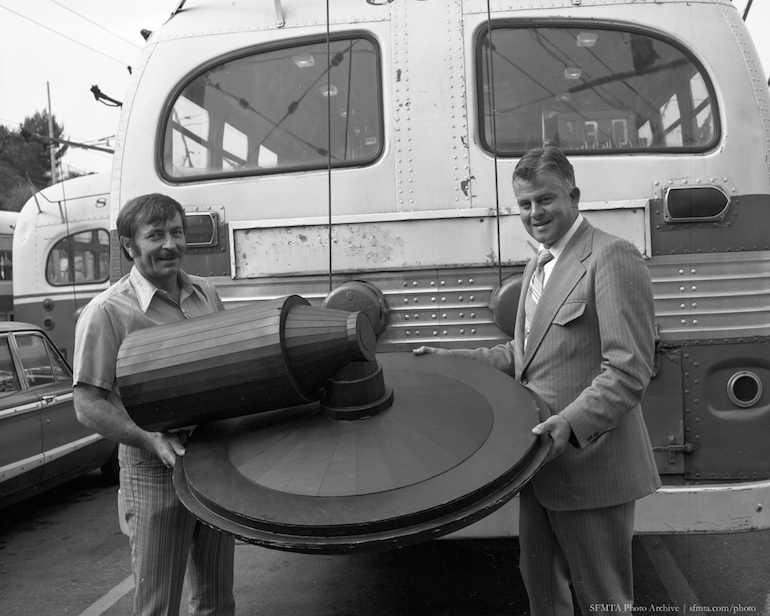 The men in this picture are holding a model of a "Flywheel Energy Storage" system dubbed the "Kinetic Energy Wheel." The system, consisting of a massive 600lb flywheel connected to a combination motor/generator, was explored as an alternative means of powering our trolley buses that operate off of the electric overhead wires.

A bus equipped with this device would hook up to the overhead power lines to spin the flywheel up to an incredible 20,000rpm, translating electric energy into kinetic energy with the spinning wheel. After this, the coach could disconnect from the wires and the spinning flywheel would then turn the motor/generator to produce the electricity needed to power the drivetrain of the vehicle. When the flywheel began to wind down and lose power, the coach would just have to reconnect to the overhead for a few minutes and head off again with a full 'charge'.

Despite some advantages of the system, there were enough drawbacks that Muni decided it was not a viable alternative to traditional trolley bus propulsion, and it was never adopted here. However, some transit operators in Switzerland, Belgium and the Democratic Republic of the Congo tried out the "Gyrobus" concept in the 1950s. All of them ultimately discontinued their use.

Although Muni never took on this particular alternative, reducing the environmental impact of our system is a top priority outlined in the MTA's Strategic Plan. We operate one of the "greenest" fleets in the nation with hybrid, biofuel, and emissions-free electric vehicles making up the vast majority of our fleet — including, of course, the new 60' articulated hybrid and electric buses hitting the streets!