As some have already noticed (like San Francisco Public Work’s @MrCleanSF), crews began construction to install a traffic signal in front of City Hall yesterday. 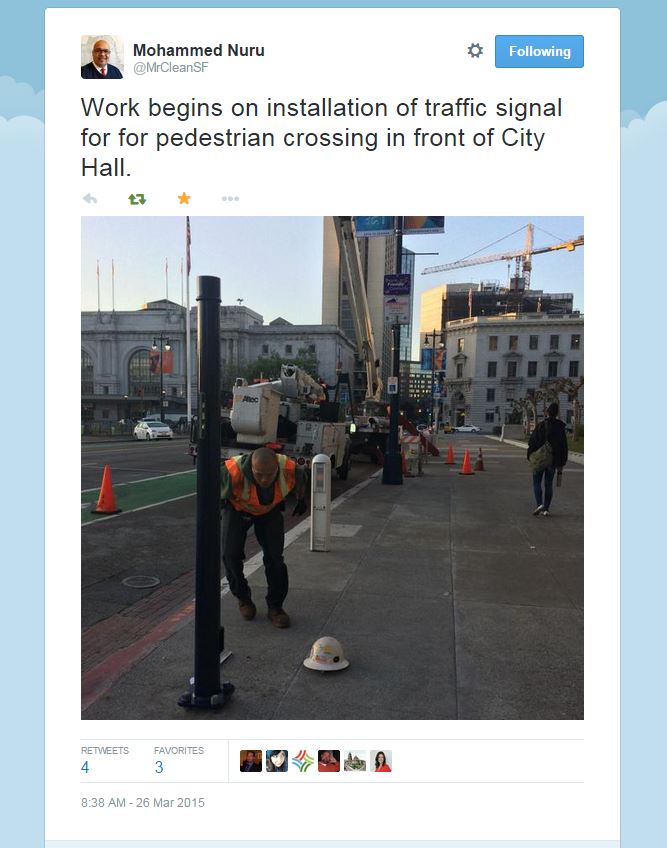 @MrCleanSF was there to capture yesterday’s work in action. 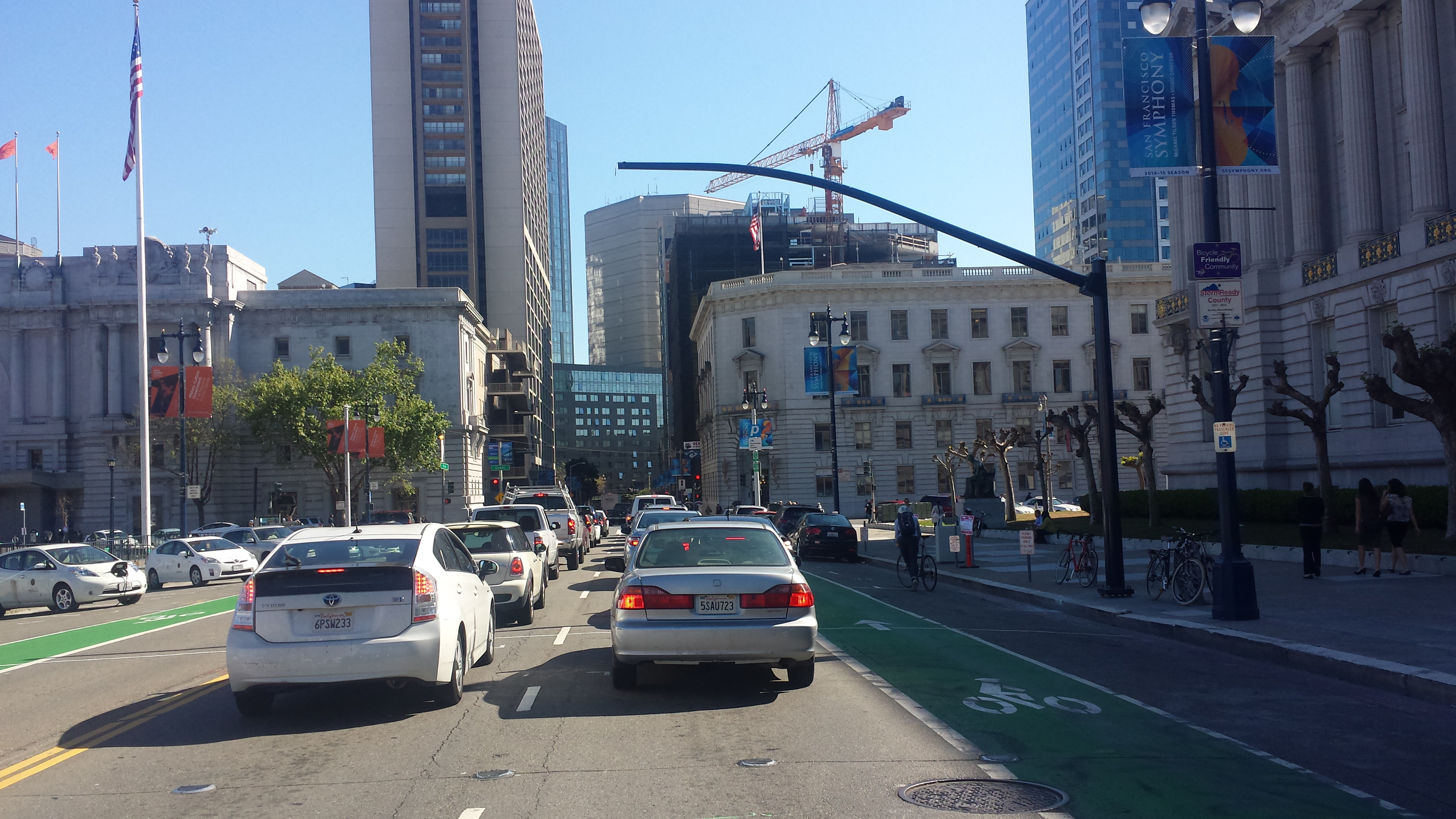 Southbound traffic on Dr. Carlton B. Goodlett Place (as Polk St. is called for the block in front of City Hall) passes under one of the new mast arms.

Our friends at Public Works have begun the hard work to install the two mast arms for the mid-block traffic signal on Polk Street between McAllister and Grove. This is part of their current project with the Recreation and Parks to renovate Civic Center Plaza. 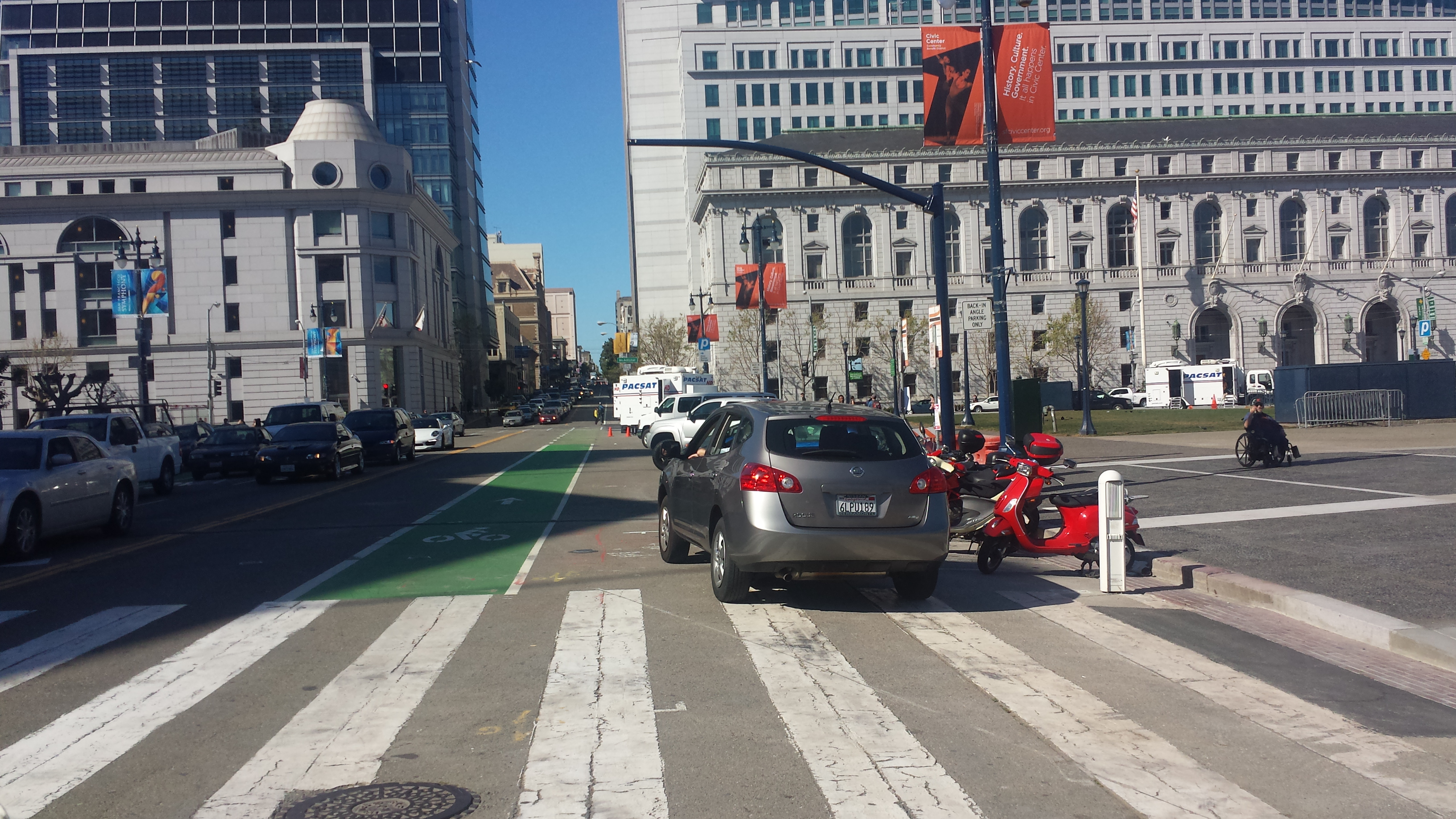 The northbound mast arm is placed a few yards north of the crosswalk.

The crosswalk has an existing system of flashing lights in the street, which are triggered to flash when a pedestrian crosses between two white posts on either side of the curb ramps. The flashing crosswalk system, installed in the 1990s to improve pedestrian safety, is being removed because it was prone to damage due to the high volume of traffic at this location.

Early last year, our engineering team began the process of replacing the crosswalk and considered a number of alternatives, including traffic signs and striping, a raised crosswalk, bulb-outs and rectangular rapid flash beacons. All options were on the table (even a combination of options), but we determined that none of those measures would compel drivers to consistently stop and yield to pedestrians at this crosswalk as much as a traffic signal.

Last July we decided to install a conventional three-color traffic signal and sought the necessary approvals. The traffic engineers worked to create a design that respects the historic and aesthetic importance of Civic Center and City Hall. For example, the mast arms for the signals line up with the avenue of plane trees in Civic Center Plaza.

The Recreation and Parks Department’s Civic Center Plaza Renovation project also includes repairing and replacing the sidewalk on the plaza side of the crosswalk. The traffic signals themselves will be installed next month with the wiring to follow.