The Numbers Are In: Bay Street Road Diet Calmed Traffic

Share this: FacebookTwitterEmail
By
Aaron Bialick (no longer with the SFMTA)
Friday, October 7, 2016

Bay Street, before and after the road diet.

Drivers now travel at calmer and safer speeds on a section of Bay Street in the Marina, which we reconfigured nearly a year ago with a road diet and parking-protected bike lane.

With our Bay Street Road Diet and Cycletrack project on three blocks of Bay (between Laguna and Fillmore streets), we visually narrowed the wide roadway, installed a speed hump and a curbside bike lanes, which is separated from vehicle traffic by back-in angled parking spaces.

Since the redesign went in last November, we’ve measured driving speeds on Bay to see how effectively it calmed traffic on the street, which runs next to Marina Middle School and Moscone Recreation Center.

The results confirmed what we’ve seen consistently with road diets: They cause drivers to travel at slower speeds, making the street safer for everyone.

“Bay Street is no longer a raceway,” said Jack Purl, who lives on the street. “The new crosswalks and bicycle lanes are much better and safer. Most importantly, traffic is slower.”

Road diets are just one tool we use to make streets safer to walk, bike and drive on. Look for more of them around the city as we work towards Vision Zero – an end to traffic deaths. 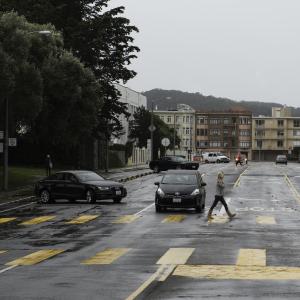