Share this: FacebookTwitterEmail
By
Keli Dailey (no longer with the SFMTA)
Wednesday, September 7, 2016

Green space, open sky and cultural experiences are what we expect at Golden Gate Park – not cars traveling at unsafe speeds.

As part of a team effort to address chronic speeding at John F. Kennedy Drive, the Mayor’s Office, San Francisco Recreation and Parks Department and the SFMTA have partnered to propose speed humps for a stretch of the road where data show a high number of severe and fatal traffic injuries.

The goal is to prevent unsafe speeds on John F. Kennedy Drive and protect the outdoor ballet that is Golden Gate Park. The project will help make the park more inviting and enjoyable for everyone.

You’re invited to a public hearing about the Golden Gate Park Traffic Safety Project on September 16, where the SFMTA will collect feedback on proposed locations for an initial 10 speed humps on JFK Drive. 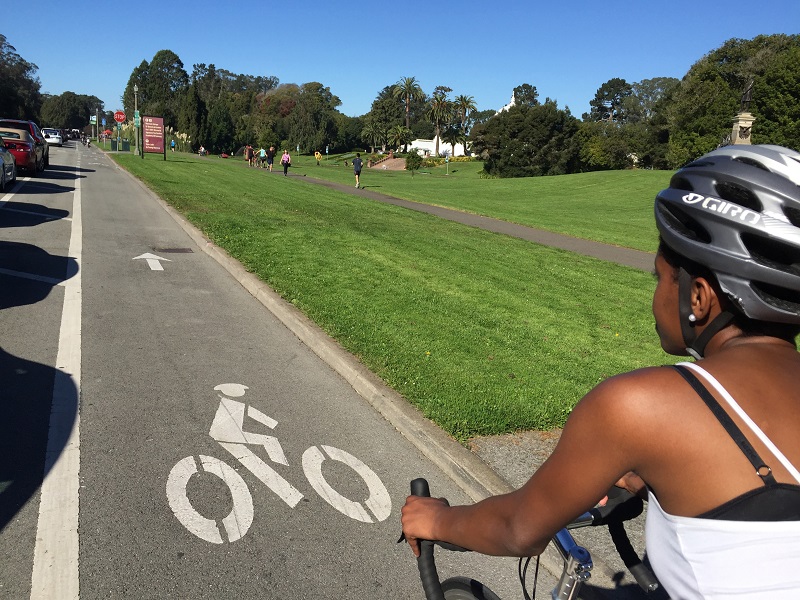 John F. Kennedy Drive in Golden Gate Park, in front of the Conservatory of Flowers. (Note: The eastern area of JFK Drive pictured here is not proposed to see any changes, but the western portion is.)

As part of the mayor’s directive and other proposed projects, the Recreation and Parks Department and SFMTA are to deliver near-term safety improvements on JFK Drive to reduce speeds and vehicular through traffic within six months. The mayor also directed the two city agencies to study long-term improvements to roadway safety in the park.

The speed humps on JFK Drive would be placed west of Transverse Drive, a frequent kickoff point for park parades and running events, then continue west to the marshy Chain of Lakes, and up near the scenic Great Highway at the edge of the park. JFK Drive is on the city’s high-injury network for people on bikes. Tragically, in June a woman biking – Heather Miller of San Francisco – was killed in a criminal act, a hit-and-run by a driver who was speeding in a stolen car.

It should be noted that speed humps are different from speed bumps. Sure, they’re both raised areas in the roadway designed to slow cars. But a speed hump is a gradual slope upward – not that jarring speed bump you find in parking lots. Humps cause car deceleration without creating the noise, vibration or safety issues associated with their sharper bump cousins. Golden Gate Park has a similar type of safety tool with a longer top surface – a speed table – on Nancy Pelosi Drive, the road connecting Martin Luther King Jr. Drive with JFK Drive.

Speed humps are a proven tool to reduce speeding, a crucial factor in collisions. Research has shown that lowering speeds – from 40 mph to 20 mph, for example – dramatically improves the likelihood someone will survive a collision. If you’re hit by car going 20 mph, you have a 90 percent chance of survival.

That’s part of the reason why the city launched a research-driven Safe Speeds SF ad campaign on Monday as part of Vision Zero. Starting in October, these ads will be coupled with strategic police speed enforcement on key corridors with demonstrated high rates of speeding.

Our research shows that along JFK Drive, people regularly drive seven to nine MPH above the speed limit (32 to 34 MPH) by day, and even faster at night.

The proposed speed humps build upon recent Golden Gate Park safety improvements like new speed limit signs put up by Recreation and Parks Department, which oversees the park’s roads. There has been stepped up speed enforcement by the San Francisco Police Department as well.

An urban refuge for some 13 million annual visitors, Golden Gate Park is one of the city’s greatest assets.

We plan to begin a dialogue with community members early next year to identify solutions that reduce speeds and better manage vehicular traffic while maintaining access to Golden Gate Park destinations no matter how you travel.

The public hearing about proposed speed humps on western JFK Drive will be held in on Friday, Sept. 16 at 10 a.m., at City Hall in Room 416.

Comments on the proposed changes may be filed in writing prior to the hearing at:

On October 4, the Parks and Recreation Open Space Advisory Committee will consider installing the humps, which could be constructed this fall. 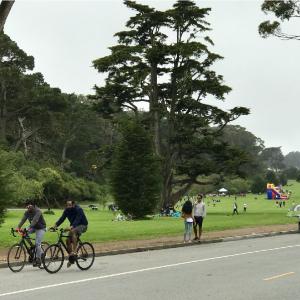