On Sept. 7, 1941, the San Francisco Municipal Railway launched its first electric trolley coach or bus route, the R Howard, marking the beginning of a long history of delivering efficient, non-polluting bus service in San Francisco. You can relive that history with a free historic photo exhibit and ride on a vintage trolley bus over a version of the R Howard route during this weekend's Muni Heritage celebration. 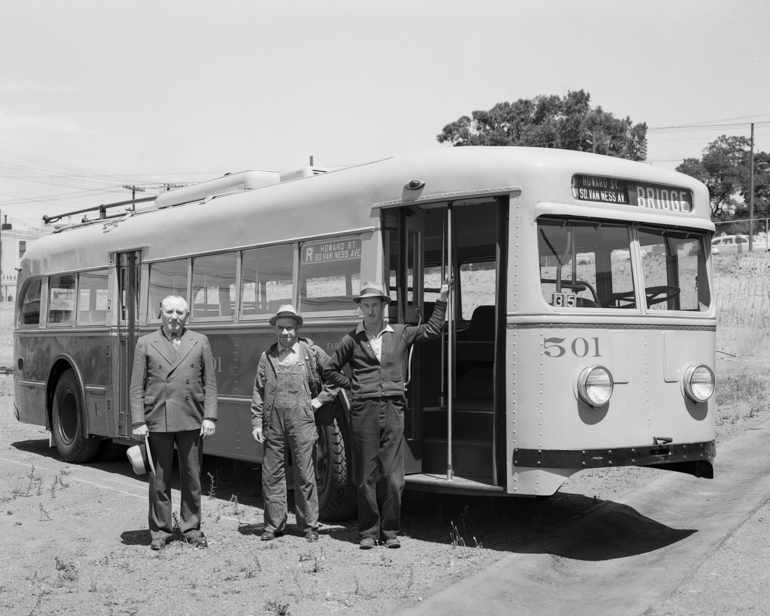 The original "R" ran through the South of Market neighborhood from Howard and Beale into the Mission District via South Van Ness to Cesar Chavez. At the time of its creation, Muni had no service in the middle of the Mission District, only the J Church and H Potrero streetcar lines, flanking the district to the west and east.

The "R" was generally a success, proving that trolley coaches could provide efficient, cost effective service. By the end of the 1940s, Muni had converted at least 14 former streetcar lines to trolley coach operation. Around this time, the "R" became part of the 41 Union, which ran in part on Union Street over Russian Hill. Today the original route is roughly served one block away by the 12 Folsom Route, which runs through South of Market and the Mission via Folsom Street.

This weekend, Muni will run two historic trolley coaches on a version of the original R Howard through SoMa and the Mission from the San Francisco Railway Museum on Steaurt Street. Be sure to come out to enjoy a free ride and check out our historic photo exhibit highlighting the history of Muni's trolley coaches!